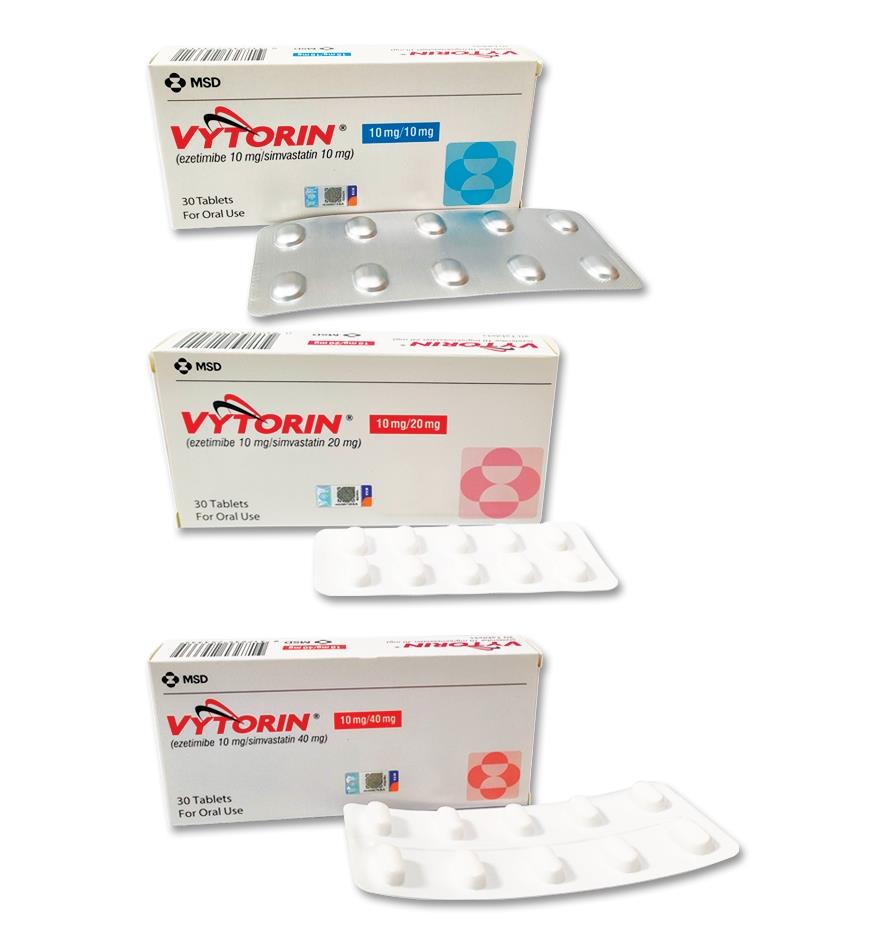 Concise Prescribing Info Full Prescribing Info Contents Description Action Indications/Uses Dosage/Direction for Use Overdosage Contraindications Special Precautions Use In Pregnancy & Lactation Side Effects Drug Interactions Storage MIMS Class ATC Classification Regulatory Classification Presentation/Packing
Full Prescribing Info
Contents
Ezetimibe, simvastatin.
Description
VYTORIN is available for oral use as tablets containing 10 mg of ezetimibe, and 10 mg of simvastatin (VYTORIN 10/10), 20 mg of simvastatin (VYTORIN 10/20), or 40 mg of simvastatin (VYTORIN 10/40).
Action
Therapeutic Class: VYTORIN (ezetimibe/simvastatin) is a lipid-lowering product that selectively inhibits the intestinal absorption of cholesterol and related plant sterols and inhibits the endogenous synthesis of cholesterol.
Pharmacology: Pharmacodynamics: Mechanism of Action: VYTORIN: Plasma cholesterol is derived from intestinal absorption and endogenous synthesis. VYTORIN contains ezetimibe and simvastatin, two lipid-lowering compounds with complementary mechanisms of action. VYTORIN reduces elevated total-C, LDL-C, Apo B, TG, and non-HDL-C, and increases HDL-C through dual inhibition of cholesterol absorption and synthesis.
Ezetimibe: Ezetimibe inhibits the intestinal absorption of cholesterol. Ezetimibe is orally active and has a mechanism of action that differs from other classes of cholesterol-reducing compounds (e.g., statins, bile acid sequestrants [resins], fibric acid derivatives, and plant stanols). The molecular target of ezetimibe is the sterol transporter, Niemann-Pick C1-Like 1 (NPC1L1), which is responsible for the intestinal uptake of cholesterol and phytosterols.
Ezetimibe localizes at the brush border of the small intestine and inhibits the absorption of cholesterol, leading to a decrease in the delivery of intestinal cholesterol to the liver; statins reduce cholesterol synthesis in the liver and together these distinct mechanisms provide complementary cholesterol reduction.
In a 2-week clinical study in 18 hypercholesterolemic patients, ezetimibe inhibited intestinal cholesterol absorption by 54%, compared with placebo.
A series of preclinical studies was performed to determine the selectivity of ezetimibe for inhibiting cholesterol absorption. Ezetimibe inhibited the absorption of [14C]-cholesterol with no effect on the absorption of triglycerides, fatty acids, bile acids, progesterone, ethinyl estradiol, or the fat-soluble vitamins A and D.
Simvastatin: After oral ingestion, simvastatin, which is an inactive lactone, is hydrolyzed in the liver to the corresponding active β-hydroxyacid form which has a potent activity in inhibiting HMG-CoA reductase (3 hydroxy - 3 methylglutaryl CoA reductase). This enzyme catalyses the conversion of HMG-CoA to mevalonate, an early and rate-limiting step in the biosynthesis of cholesterol.
Simvastatin has been shown to reduce both normal and elevated LDL-C concentrations. LDL is formed from very-low-density protein (VLDL) and is catabolized predominantly by the high affinity LDL receptor. The mechanism of the LDL-lowering effect of simvastatin may involve both reduction of VLDL-cholesterol (VLDL-C) concentration and induction of the LDL receptor, leading to reduced production and increased catabolism of LDL-C. Apolipoprotein B also falls substantially during treatment with simvastatin. In addition, simvastatin moderately increases HDL-C and reduces plasma TG. As a result of these changes, the ratios of total- to HDL-C and LDL- to HDL-C are reduced.
Clinical Studies: In controlled clinical studies, VYTORIN significantly reduced total cholesterol (total-C), low-density lipoprotein cholesterol (LDL-C), apolipoprotein B (Apo B), triglycerides (TG), and non-high-density lipoprotein cholesterol (non-HDL-C), and increased high-density lipoprotein cholesterol (HDL-C) in patients with hypercholesterolemia.
VYTORIN: Prevention of Cardiovascular Disease: The IMProved Reduction of Outcomes: Vytorin Efficacy International Trial (IMPROVE-IT) was a multicenter, randomized, double-blind, active-control study of 18,144 patients enrolled within 10 days of hospitalization for acute coronary syndrome (ACS; either acute myocardial infarction [MI] or unstable angina [UA]). Patients had an LDL-C ≤125 mg/dL (≤3.2 mmol/L) at the time of presentation with ACS if they had not been taking lipid-lowering therapy, or ≤100 mg/dL (≤2.6 mmol/L) if they had been receiving lipid-lowering therapy. All patients were randomized in a 1:1 ratio to receive either VYTORIN 10/40 mg (n=9067) or simvastatin 40 mg (n=9077) and followed for a median of 6.0 years.
Patients had a mean age of 63.6 years; 76% were male, 84% were Caucasian, and 27% were diabetic. The average LDL-C value at the time of study qualifying event was 80 mg/dL (2.1 mmol/L) for those on lipid-lowering therapy (n=6390) and 101 mg/dL (2.6 mmol/L) for those not on previous lipid-lowering therapy (n=11594). Prior to the hospitalization for the qualifying ACS event, 34% of the patients were on statin therapy. At one year, the average LDL-C for patients continuing on therapy was 53.2 mg/dL (1.4 mmol/L) for the VYTORIN group and 69.9 mg/dL (1.8 mmol/L) for the simvastatin monotherapy group. Lipid values were generally obtained for patients who remained on study therapy.
The primary endpoint was a composite consisting of cardiovascular death, major coronary events (MCE; defined as non-fatal myocardial infarction, documented unstable angina that required hospitalization, or any coronary revascularization procedure occurring at least 30 days after randomized treatment assignment) and non-fatal stroke. The study demonstrated that treatment with VYTORIN provided incremental benefit in reducing the primary composite endpoint of cardiovascular death, MCE, and non-fatal stroke compared with simvastatin alone (relative risk reduction of 6.4%, p=0.016). The primary endpoint occurred in 2572 of 9067 patients (7-year Kaplan-Meier [KM] rate 32.72%) in the VYTORIN group and 2742 of 9077 patients (7-year KM rate 34.67%) in the simvastatin alone group. (See Figure 1 and Table 1.)
The treatment effect of VYTORIN was generally consistent with the overall results across many subgroups, including sex, age, race, medical history of diabetes mellitus, baseline lipid levels, prior statin therapy, prior stroke, and hypertension (see Figure 2). (See Figures 1 and 2, Table 1.)

Primary Hypercholesterolemia: VYTORIN: Five multicenter, double-blind studies conducted with VYTORIN in patients with primary hypercholesterolemia are reported: two were comparisons with simvastatin, two were comparisons with atorvastatin, and one was a comparison with rosuvastatin.
In a multicenter, double-blind, placebo-controlled, 12-week trial, 887 hypercholesterolemic patients were randomized to one of ten treatment groups: placebo, ezetimibe (10 mg), simvastatin (10 mg, 20 mg, 40 mg, or 80 mg), or coadministered ezetimibe and simvastatin equivalent to VYTORIN (10/10, 10/20, 10/40, and 10/80). When patients receiving VYTORIN were compared to those receiving all doses of simvastatin, VYTORIN significantly lowered total-C, LDL-C, Apo B, TG, non-HDL-C, and C-reactive protein. The effects of VYTORIN on HDL-C were similar to the effects seen with simvastatin. Further analysis showed VYTORIN significantly increased HDL-C compared with placebo. (See Table 2).

In a similarly designed study, results for all lipid parameters were generally consistent. In a pooled analysis of these two studies, the lipid response to VYTORIN was similar in patients with TG levels greater than or less than 200 mg/dL.
In a multicenter, double-blind, controlled, 23-week study, 710 patients with known CHD or CHD risk equivalents, as defined by the NCEP ATP III guidelines, and an LDL-C ≥130 mg/dL were randomized to one of four treatment groups: coadministered ezetimibe and simvastatin equivalent to VYTORIN (10/10, 10/20, and 10/40), or simvastatin 20 mg. Patients not reaching an LDL-C <100 mg/dL had their simvastatin dose titrated at 6-week intervals to a maximal dose of 80 mg. At Week 5, the LDL-C reductions with VYTORIN 10/10, 10/20, or 10/40 were significantly larger than with simvastatin 20 mg. In addition, at Week 5, significantly more patients receiving VYTORIN 10/10, 10/20, or 10/40 attained LDL-C target compared to those receiving simvastatin 20 mg (see Table 3). Week 5 results for LDL-C reduction and percentage attaining LDL-C target were consistent with the end of study results (Week 23). (See Table 3.)

In a multicenter, double-blind, 6-week study, 1902 patients with primary hypercholesterolemia, who had not met their NCEP ATP III target LDL-C goal, were randomized to one of eight treatment groups: VYTORIN (10/10, 10/20, 10/40, or 10/80) or atorvastatin (10 mg, 20 mg, 40 mg, or 80 mg). When patients receiving all doses of VYTORIN were compared to those receiving all doses of atorvastatin, VYTORIN lowered total-C, LDL-C, Apo B, and non-HDL-C, and increased HDL-C significantly more than atorvastatin. The effects of VYTORIN on TG were similar to the effects seen with atorvastatin. (See Table 4.)

In a multicenter, double-blind, 24-week, forced titration study, 788 patients with primary hypercholesterolemia, who had not met their NCEP ATP III target LDL-C goal, were randomized to receive coadministered ezetimibe and simvastatin equivalent to VYTORIN (10/10 and 10/20) or atorvastatin 10 mg. For all three treatment groups, the dose of the statin was titrated at 6-week intervals to 80 mg. At each pre-specified dose comparison, VYTORIN lowered LDL-C to a greater degree than atorvastatin (See Table 5).

In a multicenter, double-blind, 6-week study, 2959 patients with primary hypercholesterolemia, who had not met their NCEP ATP III target LDL-C goal, were randomized to one of six treatment groups: VYTORIN (10/20, 10/40, or 10/80) or rosuvastatin (10 mg, 20 mg, or 40 mg). When patients receiving all doses of VYTORIN were compared to those receiving all doses of rosuvastatin, VYTORIN lowered total-C, LDL-C, Apo B, TG, and non-HDL-C significantly more than rosuvastatin. The effects of VYTORIN on HDL-C were similar to the effects seen with rosuvastatin (see Table 6).