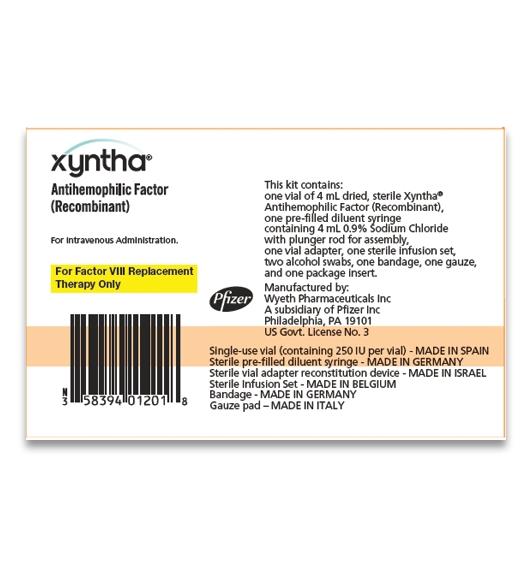 Concise Prescribing Info Full Prescribing Info Contents Description Action Indications/Uses Dosage/Direction for Use Overdosage Contraindications Special Precautions Use In Pregnancy & Lactation Adverse Reactions Caution For Usage Storage MIMS Class ATC Classification Regulatory Classification Presentation/Packing
Full Prescribing Info
Action
Pharmacology: Mechanism of Action: XYNTHA temporarily replaces the missing clotting factor VIII that is needed for effective hemostasis.
Pharmacodynamics: The activated partial thromboplastin time (aPTT) is prolonged in patients with hemophilia. Determination of aPTT is a conventional in vitro assay for biological activity of factor VIII. Treatment with XYNTHA normalizes the aPTT over the effective dosing period.
Clinical Studies: Safety and Efficacy Study: In an open label safety and efficacy study (n=94), subjects received XYNTHA in a routine prophylaxis treatment regimen with on-demand treatment administered as clinically indicated. All 94 subjects were treated with at least one dose and all are included in the intent-to-treat (ITT) population. All subjects had been previously treated (previously treated patients or PTPs) with factor VIII. Eighty-nine (89) subjects accrued ≥50 exposure days (EDs). Median age for the 94 treated subjects was 24 years (mean 27.7 and range 12-60 years). All subjects had ≥150 previous exposure days with baseline FVIII activity level of ≤2%.
Of the 94 subjects enrolled in this study, 30 evaluable subjects participated in a randomized crossover pharmacokinetics study. Twenty-five (25/30) of these subjects with FVIII:C ≤ 1% completed both the first (PK1) and the second (PK2) pharmacokinetic assessments [see Pharmacology as previously mentioned].
For routine prophylaxis, XYNTHA was administered at a dose of 30 ± 5 IU/kg 3 times a week with provisions for dose escalation based on pre-specified criteria. Seven dose escalations were prescribed for 6 subjects during the course of the study. Forty-three subjects (43/94 or 45.7%) reported no bleeding while on routine prophylaxis. The median annualized bleeding rate (ABR) for all bleeding episodes was 1.9 (mean 3.9, range 0-42.1).
Fifty-three subjects (53/94) received XYNTHA on-demand treatment for a total of 187 bleeding episodes Seven of these bleeding episodes occurred in subjects prior to switching to a prophylaxis treatment regimen. One hundred ten of 180 bleeds (110/180 or 61.1%) occurred ≤48 hours after the last dose and 38.9% (70/180 bleeds) occurred >48 hours after the last dose. The majority of bleeds reported to occur ≤48 hours after the last prophylaxis dose were traumatic (64/110 bleeds or 58.2%). Forty-two bleeds (42/70 or 60%) reported to occur >48 hours after the last prophylaxis dose were spontaneous. The on-demand treatment dosing regimen was determined by the investigator. The median dose for on-demand treatment was 30.6 IU/kg (range 6.4 to 74.4 IU/kg).
The majority of bleeding episodes (173/187 or 92.5%) resolved with 1 or 2 infusions (Table 5). Subjects rated the outcomes of infusions on a pre-specified four (4) point hemostatic efficacy scale. One hundred thirty-two of 187 bleeding episodes (132/187 or 70.6%) treated with XYNTHA were rated excellent or good in their response to initial treatment, 45 (24.1%) were rated moderate. Five (2.7%) were rated no response, and 5 (2.7%) were not rated. (See Table 1.)

Perioperative Management Study In an open-label study (n=30) for surgical prophylaxis in subjects with hemophilia A, XYNTHA was administered to 25 efficacy-evaluable PTPs with severe or moderately severe (FVIII:C ≤ 2%) hemophilia A undergoing major surgical procedures (11 total knee replacements, 1 hip replacement, 5 synovectomies, 1 left ulnar nerve transposition release, 1 ventral hernia repair/scar revision, 1 knee arthroscopy, 1 revision and debridement of the knee after a total knee replacement, 1 hip arthroplasty revision, 1 stapes replacement, 1 ankle arthrodesis, and 1 pseudotumor excision).
The results of the hemostatic efficacy ratings for these subjects are presented in Table 6. Investigator's ratings of efficacy at the end of surgery and at the end of the initial postoperative period were "excellent" or "good" for all assessments. Intraoperative blood loss was reported as "normal" or "absent" for all subjects. Thirteen of the subjects (13/25 or 52%) had blood loss in the postoperative period. The postoperative blood loss was rated as "normal" for ten of these cases while three cases were rated "abnormal" (1 due to hemorrhage following surgical trauma to the epigastric artery, 1 due to an 800 mL blood loss after hip replacement surgery, and 1 after an elbow synovectomy where the blood loss could not be measured by the investigator). (see Table 2).

Table 4 shows the pharmacokinetic parameters of nine children; four aged 14 or 15 years of age, who are also included in the summary for the adults as previously mentioned, along with five children aged 3.7-5.8 years after single 50 IU/kg doses of XYNTHA. Compared to adults, the half-life of XYNTHA is shorter in children and the clearance (based on per kg body weight) is approximately 40% higher in children. (See Table 4.)

Toxicology: Nonclinical Toxicology: Carcinogenicity, Mutagenicity, Impairment of Fertility: No studies have been conducted with XYNTHA to assess its mutagenic or carcinogenic potential. XYNTHA has been shown to be comparable to the predecessor product with respect to its biochemical and physicochemical properties, as well as its nonclinical in vivo pharmacology and toxicology. By inference, predecessor product and XYNTHA would be expected to have equivalent mutagenic and carcinogenic potential. The predecessor product has been shown to be non-genotoxic in the mouse micronucleus assay. No studies have been conducted in animals to assess impairment of fertility or fetal development.
Animal Toxicology and/or Pharmacology: Preclinical studies evaluating XYNTHA in hemophilia A dogs without inhibitors demonstrated safe and effective restoration of hemostasis. XYNTHA demonstrated a toxicological profile that was similar to the toxicological profile observed with the predecessor product. Toxicity associated with XYNTHA was primarily associated with anti-FVIII neutralizing antibody generation first detectable at 15 days of repeat dosing in high (approximately 735 IU/kg/day) level-dosed, non-human primates.