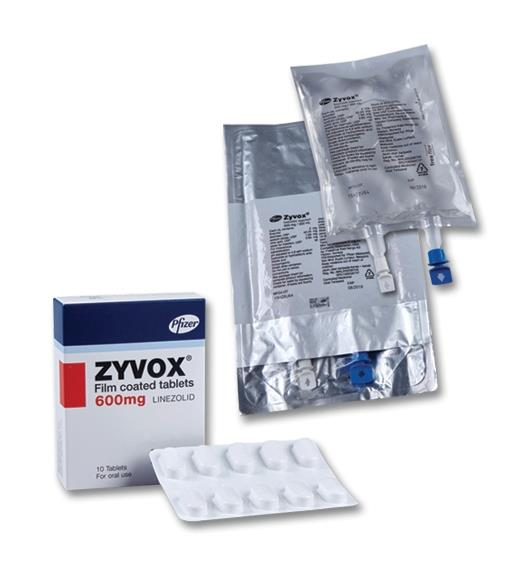 View ADR Monitoring Form
Drug Interactions
Linezolid is a weak, reversible, nonselective inhibitor of monoamine oxidase. Therefore, some patients receiving linezolid may experience a mild reversible enhancement on the pressor response induced by pseudoephedrine HCl or phenylpropanolamine HCl. Initial doses of adrenergic agents, such as dopamine or dopamine agonists, should be reduced and titrated to achieve the desired response.
Very rare spontaneous reports of serotonin syndrome with co-administration of linezolid and serotonergic agents have been reported (see Precautions).
Antibiotics: The pharmacokinetics of linezolid were not altered when administered together with either aztreonam or gentamicin. The effect of rifampin on the pharmacokinetics of linezolid was studied in sixteen healthy adult male volunteers administered linezolid 600 mg twice daily for 2.5 days with and without rifampin 600 mg once daily for 8 days. Rifampin decreased the linezolid Cmax and AUC by a mean 21% [90% CI, 15, 27] and a mean 32% [90% CI, 27, 37], respectively. The mechanism of this interaction and its clinical significance are unknown (see Precautions).
Caution For Usage
Special precautions for disposal and other handling: Solution for Infusion Administration: Linezolid solution for infusion is supplied in single-use, ready-to-use infusion bags.
Parenteral drug products should be inspected visually for particulate matter prior to administration. Check for minute leaks by firmly squeezing the bag. If leaks are detected, discard the solution, as sterility may be impaired.
Linezolid solution for infusion should be administered by intravenous infusion over a period of 30 to 120 minutes. Do not use this intravenous infusion bag in series connections. Additives should not be introduced into this solution. If linezolid solution for infusion is to be given concomitantly with another drug, each drug should be given separately in accordance with the recommended dosage and route of administration for each product. In particular, physical incompatibilities resulted when linezolid solution for infusion was combined with the following drugs during simulated Y-site administration: amphotericin B, chlorpromazine HCl, diazepam, pentamidine isothionate, erythromycin lactobionate, phenytoin sodium, and trimethoprim-sulfamethoxazole. Additionally, chemical incompatibility resulted when linezolid solution for infusion was combined with ceftriaxone sodium.
If the same intravenous line is used for sequential infusion of several drugs, the line should be flushed before and after infusion of linezolid solution for infusion with an infusion solution compatible with linezolid solution for infusion and with any other drug(s) administered via this common line.
Compatible Intravenous Solutions: 5% Dextrose Injection, USP; 0.9% Sodium Chloride Injection, USP; Lactated Ringer's Injection, USP.
Keep the infusion bags in the overwrap until ready to use. Store at room temperature. Protect from freezing. Linezolid solution for infusion may exhibit a yellow color that can intensify over time without adversely affecting potency.
Constitution of Oral Suspension: Linezolid for oral suspension is supplied as a powder/granule for constitution. Gently tap bottle to loosen powder. Add a total of 123 mL distilled water in two portions. After adding the first half, shake vigorously to wet all of the powder. Then add the second half of the water and shake vigorously to obtain a uniform suspension. After constitution, each 5 mL of the suspension contains 100 mg of linezolid. Before using, gently mix by inverting the bottle 3 to 5 times. DO NOT SHAKE. Store constituted suspension at room temperature. Use within 21 days after constitution.
Incompatibilities: Solution for Infusion: Linezolid solution for infusion was physically incompatible with the following drugs when combined in simulated Y-site administration: amphotericin B, chlorpromazine HCl, diazepam, pentamidine isothionate, phenytoin sodium, erythromycin lactobionate, and trimethoprim-sulfamethoxazole.
Linezolid solution for infusion was chemically incompatible when combined with ceftriaxone sodium.
Storage
Tablets: Store below 30°C. Protect from light.
Oral Suspension: Store at 25°C (77°F); excursions permitted to 15-30°C (59-86°F). Protect from light. Keep bottles tightly closed to protect from moisture.
Solution for Infusion: Store below 30°C. It is recommended that the infusion bags be kept in the overwrap until ready to use. Protect infusion bags from freezing.
Shelf-Life: 21 days for the reconstituted product.
MIMS Class
Other Antibiotics
ATC Classification
J01XX08 - linezolid ; Belongs to the class of other antibacterials. Used in the systemic treatment of infections.