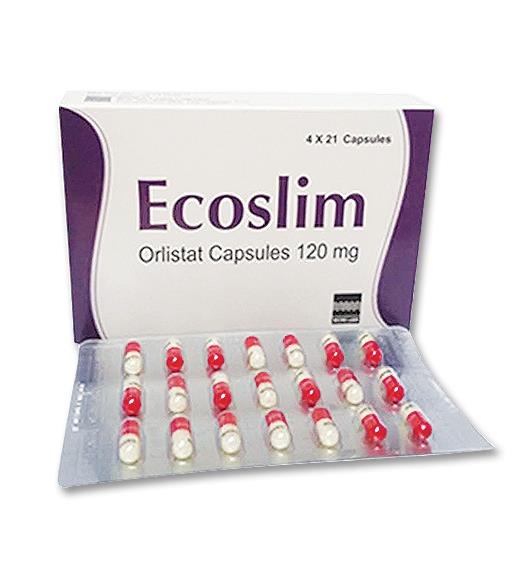 NEW Brand Resources
Concise Prescribing Info Full Prescribing Info Contents Description Action Indications/Uses Dosage/Direction for Use Overdosage Contraindications Special Precautions Use In Pregnancy & Lactation Adverse Reactions Drug Interactions Storage MIMS Class ATC Classification Regulatory Classification Presentation/Packing Brand Resources
Full Prescribing Info
Contents
Orlistat.
Description
Each Capsule Contains: Orlistat 120 mg.
Chemically Orlistat is described as (S)-2-formylamino-4-methyl-pentanoic acid (S)-1-[[(2S, 3S)-3-hexyl-4-oxo-2-oxetanyl] methyl]-dodecyl ester.
Action
Pharmacotherapeutic Group: Reversible lipase inhibitor.
Pharmacology: Orlistat is a reversible inhibitor of lipases. It exerts its therapeutic activity in the lumen of the stomach and small intestine by forming a covalent bond with the active serine residue site of gastric and pancreatic lipases. The inactivated enzymes are thus unavailable to hydrolyze dietary fat in the form of triglycerides into absorbable free fatty acids and monoglycerides. As undigested triglycerides are not absorbed, the resulting caloric deficit may have a positive effect on weight control. Systemic absorption of drug is therefore not needed for activity. At the recommended therapeutic dose of 120 mg three times a day, orlistat inhibits dietary fat absorption by approximately 30%.
Pharmacokinetics: Systemic exposure to orlistat is minimal. Following oral dosing with 360 mg 14C-orlistat, plasma radioactivity peaked at approximately 8 hours; plasma concentrations of intact orlistat were near the limits of detection (<5 ng/mL). Orlistat is >99% bound to plasma proteins. Orlistat minimally partitioned into erythrocytes. Orlistat is metabolized in two major metabolites, M1 (4-member lactone ring hydrolyzed) and M3 (M1 with N-formyl leucine moiety cleaved). The primary metabolite M1 had a short half life (~3 hours) whereas the secondary metabolite M3 disappeared at a slower rate (half-life ~13.5 hours). Fecal excretion of the unabsorbed drug was found to be the major route of elimination. Orlistat and its M1 and M3 metabolites were also subject to biliary excretion. The time to reach complete excretion (fecal plus urinary) was 3 to 5 days. Based on limited data, the half-life of the absorbed orlistat is in the range of 1 to 2 hours.
Indications/Uses
Orlistat is indicated in conjunction with a mildly hypocaloric diet for the treatment of obese patients with a body mass index (BMI) greater than or equal to 30 kg/m2, or overweight patients (BMI ≥28 kg/m2) with associated risk factors. Treatment with orlistat should be discontinued after 12 weeks if patients have been unable to lose at least 5% of the body weight as measured at the start of therapy.
Adolescents: Obese adolescents should be treated with orlistat only if measures carried out in a therapeutic program over 6 months, including a balanced diet appropriate to the age of the patient and a program of physical activity are not successful.
Dosage/Direction for Use
The recommended dose of orlistat is 120 mg capsule taken thrice daily with water immediately before, during or up to one hour after each main meal. If a meal is missed or contains no fat, the dose of orlistat should be omitted. The patient should be on a nutritionally balanced, mildly hypocaloric diet that contains approximately 30% of calories from fat. Doses of orlistat above 120 mg three times daily have not been shown to provide additional benefit. The effect of orlistat results in an increase in faecal fat as early as 24 to 48 hours after dosing. Upon discontinuation of therapy, faecal fat content usually returns to pre-treatment levels, within 48 to 72 hours.
Obese adolescents should be treated with orlistat only if their BMI is above the level indicated in the following table. (See table.)

Overdosage
Single doses of 800 mg orlistat and multiple doses of up to 400 mg three times daily for 15 days did not have significant adverse findings. Should a significant overdose of orlistat occur, it is recommended that the patient be observed for 24 hours. Based on human and animal studies, any systemic effects attributable to the lipase-inhibiting properties of orlistat should be rapidly reversible.
Contraindications
The orlistat therapy is contraindicated in patients with known hypersensitivity to the active substance or to any of the excipients, in chronic malabsorption syndrome, cholestasis and breast-feeding.
Special Precautions
The decrease in body weight with orlistat treatment was less in type II diabetic patients than in non-diabetic patients. Antidiabetic medicinal product treatment may have to be closely monitored when taking orlistat. Co-administration of orlistat with ciclosporin is not recommended. Patients should be advised to adhere to the dietary recommendations they are given. The possibility of experiencing gastrointestinal adverse reactions may increase when orlistat is taken with a diet high in fat (e.g. in a 2000 kcal/day diet, >30% of calories from fat equates to >67 g of fat). Cases of rectal bleeding have been reported with orlistat. Prescribers should investigate further in case of severe and/or persistent symptoms. The use of an additional contraceptive method is recommended to prevent possible failure of oral contraception that could occur in case of severe diarrhoea. Coagulation parameters should be monitored in patients treated with concomitant oral anticoagulants. The use of orlistat may be associated with hyperoxaluria and oxalate nephropathy in patients with underlying chronic kidney disease and/or volume depletion. Rare occurrence of hypothyroidism and/or reduced control of hypothyroidism may occur. Orlistat may unbalance anticonvulsant treatment by decreasing the absorption of antiepileptic drugs, leading to convulsions.
Use In Pregnancy & Lactation
For orlistat no clinical data on exposed pregnancies are available. Caution should be exercised when prescribing to pregnant women. As it is not known whether orlistat is secreted into human milk, orlistat is contraindicated during breast-feeding.
Adverse Reactions
Adverse reactions to orlistat are largely gastrointestinal in nature. The incidence of adverse events decreased with prolonged use of orlistat. Other adverse effects reported are headache, upper respiratory infection, lower respiratory infection, abdominal pain/discomfort, oily spotting from the rectum, flatus with discharge, faecal urgency, fatty/oily stool, flatulence, liquid stools, oily evacuation, increased defecation, rectal pain, soft stools, faecal incontinence, abdominal distension, tooth disorder, gingival disorder, urinary tract infection, hypoglycaemia, influenza, fatigue, menstrual irregularity, anxiety, etc.
View ADR Monitoring Form
Drug Interactions
Drug-drug interaction studies indicate that orlistat had no effect on pharmacokinetics and/or pharmacodynamics of alcohol, digoxin, glyburide, nifedipine (extended-release tablets), phenytoin, pravastatin, or warfarin. Alcohol did not affect the pharmacodynamics of orlistat. A decrease in ciclosporin and amiodarone plasma levels has been observed in a drug-drug-interaction study and also reported in several cases, when orlistat was administered concomitantly.
Storage
Store below 30°C.
MIMS Class
Anti-Obesity Agents
ATC Classification
A08AB01 - orlistat ; Belongs to the class of peripherally acting antiobesity products.