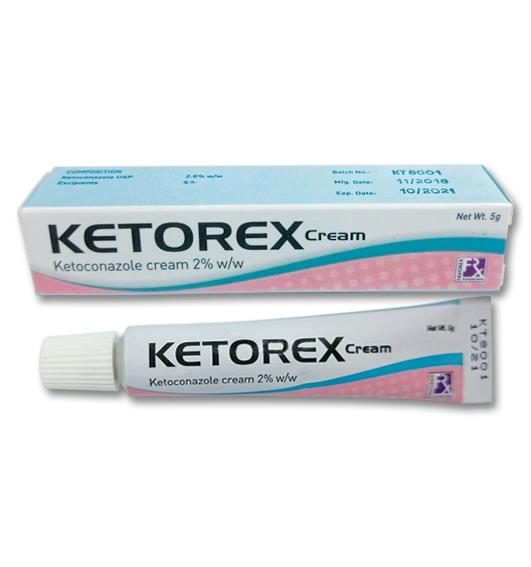 Concise Prescribing Info Full Prescribing Info Contents Description Action Indications/Uses Dosage/Direction for Use Overdosage Contraindications Special Precautions Use In Pregnancy & Lactation Side Effects Drug Interactions Storage MIMS Class ATC Classification Regulatory Classification Presentation/Packing
Full Prescribing Info
Special Precautions
Ketoconazole Cream, 2% is not for ophthalmic use.
To prevent a rebound effect after stopping a prolonged treatment with topical corticosteroids it is recommended to continue applying a mild topical corticosteroid in the morning and to apply Ketoconazole 2% cream in the evening and to subsequently and gradually withdraw the steroid therapy over a period of 2-3 weeks.
Ketoconazole Cream, 2% contains sodium sulfite anhydrous, a sulfite that may cause allergic-type reactions including anaphylactic symptoms and life-threatening or less severe asthmatic episodes in certain susceptible people. The overall prevalence of sulfite sensitivity in the general population is unknown and probably low. Sulfite sensitivity is seen more frequently in asthmatic than in non-asthmatic people.
General: If a reaction suggesting sensitivity or chemical irritation should occur, use of the medication should be discontinued. Hepatitis (1:10,000 reported incidence) and, at high doses, lowered testosterone and ACTH induced corticosteroid serum levels have been seen with orally administered ketoconazole; these effects have not been seen with topical ketoconazole.
Carcinogenesis, Mutagenesis, Impairment of Fertility: A long term feeding study in Swiss Albino mice and in Wistar rats showed no evidence of oncogenic activity. The dominant lethal mutation test in male and female mice revealed that single oral doses of Ketoconazole as high as 80 mg/kg produced no mutation in any stage of germ cell development. The Ame's Salmonella microsomal activator assay was also negative.
Teratogenic effects: Use in Pregnancy: Pregnancy Category C: Ketoconazole has been shown to be teratogenic (syndactylia and digodactylia) in the rat when given orally in the diet at 80 mg/kg/day. (10 times the maximum recommended human oral dose.) However, these effects may be related to maternal toxicity which was seen at this and higher dose levels.
Use in Lactation: It is not known whether Ketoconazole Cream, 2% administered topically could result in sufficient systemic absorption to produce detectable quantities in breast milk. Nevertheless, a decision should be made whether to discontinue the drug, taking into account the importance of the drug to the mother.
Use in Children: Safety and effectiveness in Children have not been established.
Effects on ability to drive and use machines: Not Stated.