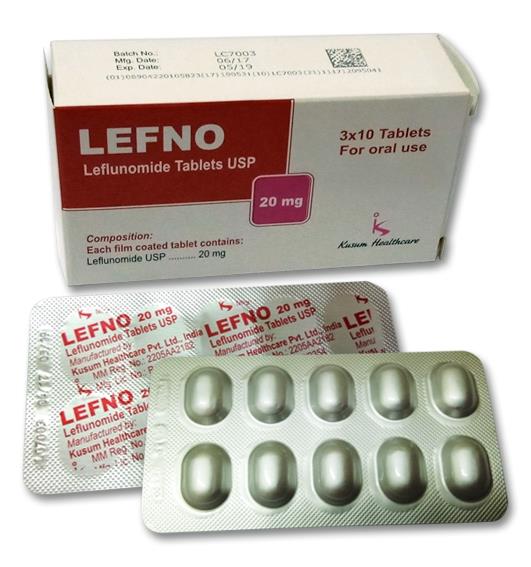 Concise Prescribing Info Full Prescribing Info Contents Description Action Indications/Uses Dosage/Direction for Use Overdosage Contraindications Special Precautions Use In Pregnancy & Lactation Adverse Reactions Side Effects Drug Interactions Storage MIMS Class ATC Classification Regulatory Classification Presentation/Packing
Full Prescribing Info
Action
Pharmacotherapeutic group: Selective immunosuppressants. ATC code: L04AA13.
Pharmacology: Pharmacodynamics: Leflunomide is a prodrug that is rapidly and almost completely metabolized following oral administration to its pharmacologically active metabolite, A771726. This metabolite is responsible for essentially all of the drug’s activity in vivo.
The active metabolite of leflunomide A771726 inhibits dehydroorotat-dehydrogenase enzyme and exerts an antiproliferative effect on activated lymphocytes, which play important roles in the pathogenesis of rheumatic disease, such as rheumatoid arthritis, psoriatic arthritis as well as cutaneous manifestations of psoriasis, which is an autoimmune T-cell-mediated disease.
Pharmacokinetics: Leflunomide is rapidly converted to the active metabolite, A771726 by first-pass metabolism (ring opening) in gut wall and liver. The only plasma-radiolabelled metabolite detected was A771726. This metabolite is responsible for essentially all the in vivo activity of Lefno.
Absorption: Excretion data from the 14C study indicated that at least about 82 to 95% of the dose is absorbed. The time to peak plasma concentrations of A771726 is very variable; peak plasma levels can occur between 1 hour and 24 hours after single administration. Leflunomide can be administered with food, since the extent of absorption is comparable in the fed and fasting state. Due to the very long half-life of A771726 (approximately 2 weeks), a loading dose of 100 mg for 3 days was used in clinical studies to facilitate the rapid attainment of steady-state levels of A771726. Without a loading dose it is estimated that attainment of steady-state plasma concentrations would require nearly two months of dosing. In multiple dose studies in patients with rheumatoid arthritis, the pharmacokinetic parameters of A771726 were linear over the dose range of 5 to 25 mg. In these studies, the clinical effect was closely related to plasma concentration of A771726 and to the daily dose of leflunomide. At a dose level of 20 mg/day average plasma concentration of A771726 at steady state is approximately 35 μg/ml. At steady state plasma levels accumulate about 33- to 35-fold compared with single dose.
Distribution: In human plasma, A771726 is extensively bound to protein (albumin). The unbound fraction of A771726 is about 0.62%, Binding of A771726 is linear in the therapeutic concentration range. Binding of A771726 appeared slightly reduced and more variable in plasma from patients with rheumatoid arthritis or chronic renal insufficiency. The extensive protein binding of A771726 could lead to displacement of other highly-bound drugs. Consistently with extensive protein binding A771726 has a low apparent volume of distribution (approximately 11 litres). There is no preferential uptake in erythrocytes.
Elimination: In human plasma A771726 is slow and characterised by an apparent clearance of about 31 ml/hr. The elimination half-life in patients is approximately 2 weeks. After administration of a radiolabelled dose of leflunomide, radioactivity was equally excreted in faeces, probably by biliary elimination, and in urine. A771726 was still detectable in urine and faeces 36 days after a single administration. The principal urinary metabolites were glucuronide products derived from leflunomide (mainly in 0 to 24 hours samples) and on oxanilic acid derivative of A771726. The principal faecal component was A771726.
It has been show in man that administration of an oral suspension of activated powdered charcoal or colestyramine leads to a rapid and significant increase in A771726 elimination rate and decline in plasma concentrations. This is thought to be achieved by a gastrointestinal dialysis mechanism and/or by interrupting enterohepatic recycling.