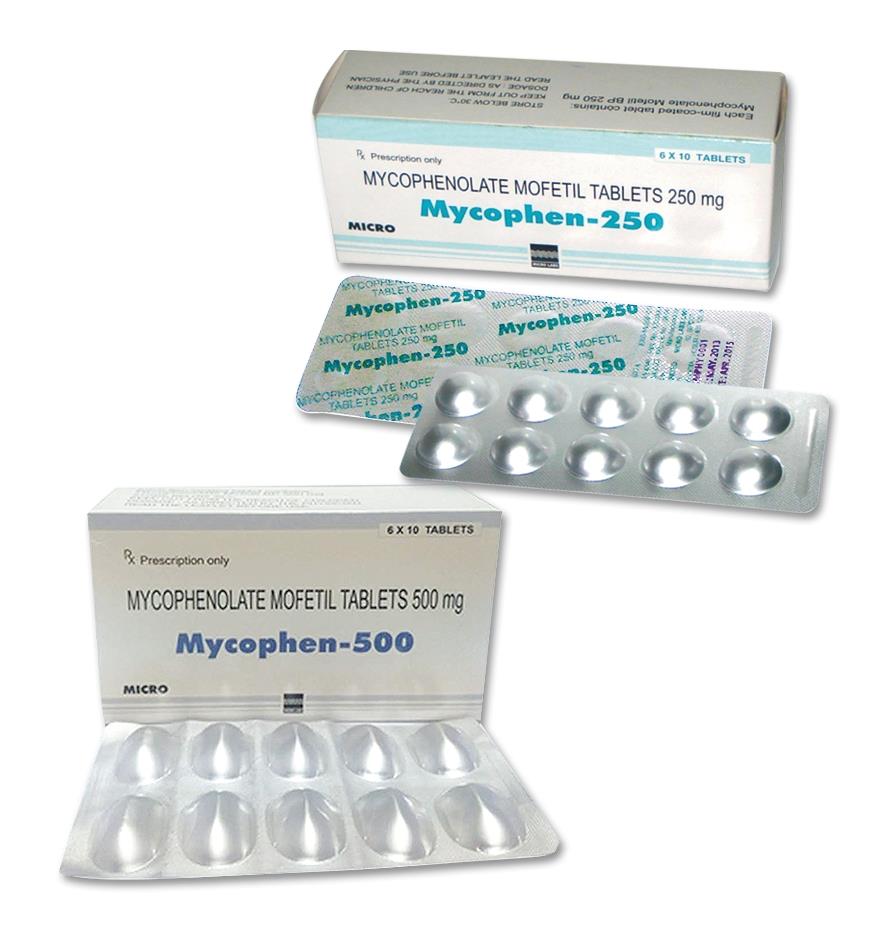 NEW Brand Resources
Concise Prescribing Info Full Prescribing Info Contents Description Action Indications/Uses Dosage/Direction for Use Overdosage Contraindications Special Precautions Use In Pregnancy & Lactation Side Effects Drug Interactions Storage MIMS Class ATC Classification Regulatory Classification Presentation/Packing Brand Resources
Full Prescribing Info
Drug Interactions
Interaction studies have only been performed in adults.
Aciclovir: Higher aciclovir plasma concentrations were observed when mycophenolate mofetil was administered with aciclovir in comparison to the administration of aciclovir alone. The changes in MPAG (the phenolic glucuronide of MPA) pharmacokinetics (MPAG increased by 8%) were minimal and are not considered clinically significant. Because MPAG plasma concentrations are increased in the presence of renal impairment, as are aciclovir concentrations, the potential exists for mycophenolate mofetil and aciclovir, or its prodrugs eg, valaciclovir, to compete for tubular secretion and further increases in concentrations of both substances may occur.
Antacids with Magnesium and Aluminum Hydroxides: Absorption of mycophenolate mofetil was decreased when administered with antacids.
Cholestyramine: Following single dose administration of mycophenolate mofetil 1.5 g to normal healthy subjects pre-treated with 4 g 3 times daily of cholestyramine for 4 days, there was a 40% reduction in the AUC of MPA. Caution should be used during concomitant administration because of the potential to reduce efficacy of mycophenolate. Medicinal products that interfere with enterohepatic circulation: Caution should be used with medicinal products that interfere with enterohepatic circulation because of their potential to reduce the efficacy of mycophenolate.
Ciclosporin A: Ciclosporin A (CsA) pharmacokinetics are unaffected by mycophenolate mofetil.
In contrast, if concomitant ciclosporin treatment is stopped, an increase in MPA AUC of around 30% should be expected.
Ganciclovir: Based on the results of a single dose administration study of recommended dose of oral mycophenolate and ganciclovir IV and the known effects of renal impairment on the pharmacokinetics of mycophenolate and ganciclovir, it is anticipated that co-administration of these agents (which compete for mechanism of renal tubular secretion) will result in increases in MPAG and ganciclovir concentration. No substantial alteration of MPA pharmacokinetics is anticipated and mycophenolate dose adjustment is not required. In patients with renal impairment in which mycophenolate and ganciclovir or its prodrugs eg, valganciclovir are co-administered, the dose recommendations for ganciclovir should be observed and patients should be monitored carefully.
Oral Contraceptives: The pharmacokinetics and pharmacodynamics of oral contraceptives were unaffected by co-administration of mycophenolate.
Rifampicin: In patients not also taking ciclosporin, concomitant administration of mycophenolate and rifampicin resulted in a decrease in MPA exposure (AUC0-12h) of 18-70%. It is recommended to monitor MPA exposure levels and to adjust mycophenolate doses accordingly to maintain clinical efficacy when rifampicin is administered concomitantly.
Sirolimus: In renal transplant patients, concomitant administration of mycophenolate and CsA resulted in reduced MPA exposures by 30-50% compared with patients receiving the combination of sirolimus and similar doses of mycophenolate.
Sevelamer: Decreased MPA Cmax and AUC0-12h by 30% and 25%, respectively, were observed when mycophenolate was concomitantly administered with sevelamer without any clinical consequences (ie, graft rejection). It is recommended, however, to administer mycophenolate at least 1 hr before or 3 hrs after sevelamer intake to minimise the impact on the absorption of MPA. There is no data on mycophenolate with phosphate binders other than sevelamer.
Trimethoprim/Sulfamethoxazole: No effect on the bioavailability of MPA was observed.
Norfloxacin and Metronidazole: In healthy volunteers, no significant interaction was observed when mycophenolate was concomitantly administered with norfloxacin and metronidazole separately. However, combined norfloxacin and metronidazole reduced the MPA exposure by approximately 30% following a single dose of mycophenolate.
Ciprofloxacin and Amoxicillin Plus Clavulanic Acid: Reductions in predose (trough) MPA concentrations of about 50% have been reported in renal transplant recipients in the days immediately following commencement of oral ciprofloxacin or amoxicillin plus clavulanic acid. This effect tended to diminish with continued antibiotic use and to cease within a few days of their discontinuation. The change in predose level may not accurately represent changes in overall MPA exposure. Therefore, a change in the dose of mycophenolate should not normally be necessary in the absence of clinical evidence of graft dysfunction. However, close clinical monitoring should be performed during the combination and shortly after antibiotic treatment.
Tacrolimus: In hepatic transplant patients initiated on mycophenolate and tacrolimus, the AUC and Cmax of MPA, the active metabolite of mycophenolate, were not significantly affected by co-administration with tacrolimus. In contrast, there was an increase of approximately 20% in tacrolimus AUC when multiple doses of mycophenolate (1.5 g twice daily) were administered to patients taking tacrolimus. However, in renal transplant patients, tacrolimus concentration did not appear to be altered by mycophenolate.
Other Interactions: Co-administration of probenecid with mycophenolate mofetil in monkeys raises plasma AUC of MPAG by 3-fold. Thus, other substance known to undergo renal tubular secretion may compete with MPAG, and thereby raise plasma concentrations of MPAG or the other substance undergoing tubular secretion.
Live Vaccines: Live vaccines should not be given to patients with an impaired immune response. The antibody response to other vaccines may be diminished.