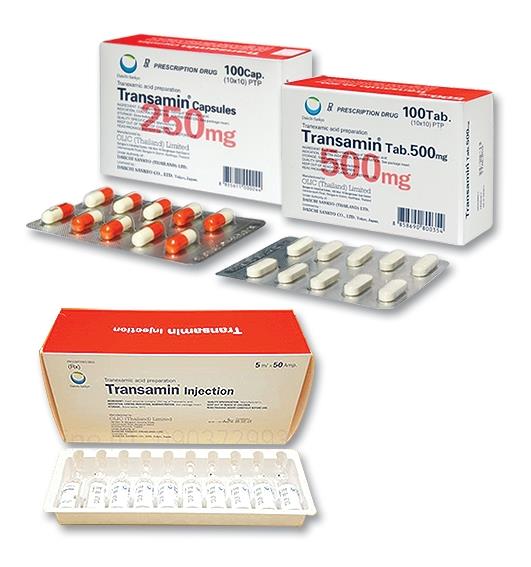 Concise Prescribing Info Full Prescribing Info Contents Description Action Indications/Uses Dosage/Direction for Use Overdosage Contraindications Special Precautions Use In Pregnancy & Lactation Adverse Reactions Drug Interactions Caution For Usage Storage MIMS Class ATC Classification Regulatory Classification Presentation/Packing
Full Prescribing Info
Action
Pharmacology: In physiological and pathologic conditions, fibrinolysis affects enhancement of vascular permeability, and relevant to the development, progression and healing of hemorrhage; allergy and other biological reactions (ampoule) induced by plasmin. Tranexamic acid inhibits the activity of plasmin, thereby exhibiting antihemorrhagic effects.
Antiplasmin Action: Tranexamic acid inhibits the binding of plasmin or plasminogen to fibrin by strongly binding to the lysine binding site (LBS) of fibrin, which is also the binding site for plasmin and plasminogen. Therefore, tranexamic acid strongly inhibits fibrinolysis induced by plasmin. In addition, in the presence of antiplasmins eg, α2-macroglobulin in the plasma, the antifibrinolytic action of tranexamic acid is even further strengthened.
Hemostatic Action: When the blood level of plasmin is abnormally elevated, various phenomena occur eg, inhibition of platelet aggregation and decomposition of coagulation factors.
Even a slight elevation in the blood level of plasmin specifically induces fibrinolysis. Tranexamic acid is considered to exhibit a hemostatic effect by inhibiting fibrinolysis in common types of hemorrhage.
Tablet: Clinical Studies: Hemostatic Action: A hemostatic effect of Transamin was observed in 2063 out of 2802 patients (73.6%) with a bleeding tendency caused by diseases eg, leukemia, aplastic anemia and purpura, which are considered to be associated with systemic hyperfibrinolysis or abnormal bleeding eg, pulmonary and vaginal hemorrhage, renal, intraoperative and postoperative bleeding.
Pharmacokinetics: Blood Concentration: Capsule/Tablet: When a single dose of tranexamic acid was administered orally to healthy adults, the pharmacokinetic parameters were shown as follows. (See Table 1 and Figure 1.)

Distribution: Reference Information (Animal Study): Capsule/Tablet: When a single dose of 14C-tranexamic acid was administered orally to rats, the concentration in most organs reached the peak values as well as the blood concentration after 2 hrs. Levels in kidney and liver were higher, and those of other organs were lower than that of the blood.
Ampoule: When 14C-tranexamic acid was administered IV or IM to mice, the distribution in the tissue was highest in the liver, kidneys and lungs, followed by pancreas, adrenals, spleen, prostate, colon, uterus, heart and muscle. Levels in the brain were low.
Metabolism and Excretion: When a single dose of tranexamic acid (250 mg or 500 mg) was administered orally, or 500 mg and 1000 mg administered IM or IV, respectively, to healthy adults, it was rapidly absorbed and about 40-70% orally, and about 80% and 76%, IM and IV, respectively, of the administered dose was excreted as unchanged form in the urine within 24 hrs of administration.