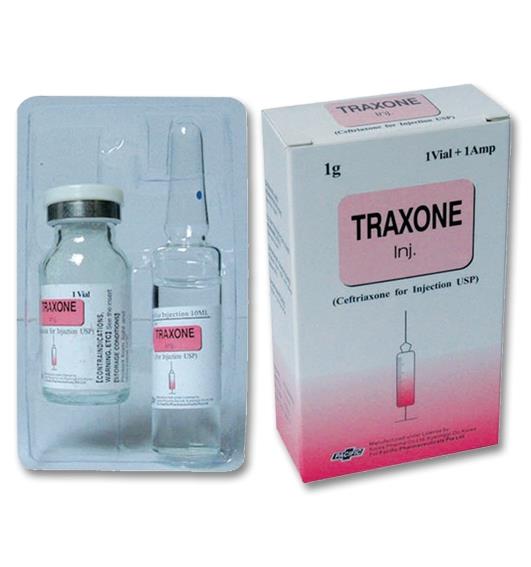 Ceftriaxone was completely absorbed following I.M. administration with mean maximum plasma concentrations occurring between 2 and 3 hours postdating. Multiple I.V. or I.M. doses ranging from 0.5 to 2 g at 12- to 24-hour intervals resulted in 15% to 36% accumulation of ceftriaxone above single dose values.
Ceftriaxone concentrations in urine are high, as shown in Table 2.

Thirty-three percent to 67% of a ceftriaxone dose was excreted in the urine as unchanged drug and the remainder was secreted in the bile and ultimately found in the feces as microbiologically inactive compounds. After a 1 g I.V. dose, average concentrations of ceftriaxone, determined from 1 to 3 hours after dosing, were 581 mcg/g in the gallbladder wall and 62.1 mcg/ml in the concurrent plasma.
Over a 0.15 to 3 g dose range in healthy adult subjects, the values of elimination half-life ranged from 5.8 to 8.7 hour: apparent volume of distribution from 5.78 to 13.5 L plasma clearance from 0.58 to 1.45 L/hour; and renal clearance from 0.32 to 0.73 L/hour. Ceftriaxone is reversibly bound to human plasma proteins, and the binding decreased from a value of 95% bound at plasma concentrations of <25 mcg/ml to a value of 85% bound at 300 mcg/ml.
The average values of maximum plasma concentration, elimination half-life, plasma clearance and volume of distribution after a 50 mg/kg I.V. dose and after a 75 mg/kg I.V. dose in pediatric patients suffering from bacterial meninges are shown in Table 3. Ceftriaxone penetrated the inflamed meninges of infants and children; CSF concentrations after a 50 mg/kg I.V. dose and after a 75mg/kg I.V. dose are also shown in Table 3.

Compared to that in healthy adult subjects, the pharmacokinetics of ceftriaxone were only minimally altered in elderly subjects and in patients with renal impairment of hepatic dysfunction therefore, dosage adjustments are not necessary for these patients with ceftriaxone dosages up to 2 g per day. Ceftriaxone was not removed to any significant extent from the plasma by hemodialysis. In 6 of 26 dialysis patients, the elimination rate of ceftriaxone was markedly reduced, suggesting that plasma concentrations of ceftriaxone should be monitored in these patients to determine if dosage adjustments are necessary.
TRAXONE Inj. is bactericidal and acts by inhibition of cell wall synthesis. It has a high degree of stability in the presence of β-lactamases (both penicillinases and cephalosporinases) of gram-positive and gram-negative bacteria. The basic method of action is the interruption of the transpeptidation process that links the individual peptidoglycan components of the bacteria, cell wall to each other.
Microbiology: TRAXONE Inj. is usually active against the following microorganisms in vitro: Gram-Positive Aerobes: Staphylococcus aureus (including penicillinase-producing strains), Staphylococcus epidermidis, Streptococcus pneumonia, Streptococcus group A (Streptococcus pyogenes), Streptococcus group B (Streptococcus agalactiae), Streptococcus viridans, Streptococcus bovis.
Note: Methicillin-resistant Staphylococcus sp are resistant to cephalosporins, including ceftriaxone. Most strains of Enterococci (eg. Streptococcus faecalis) are resistant. Gram-Negative Aerobes: Aeromonas sp, Alcaligenes sp, Branhamella catarrhalis (β-lactamase negative and positive), Citrobacter sp, Enterobacter sp (some strains are resistant), Escherichia coli, Haemophilus ducreyi, Haemophilus influenzae (including penicillinase-producing strains), Haemophilus parainfluenzae, Klebsiella sp (including K. pneumonia), Moraxella sp, Morganella morganii, Neisseria gonorrhoeae (including penicillinase-producing strains), Neisseria meningitidis, Plesiomonas shigelloides, Proteus mirabilis, Proteus vulgaris, Providencia sp, Pseudomonas aeruginosa (some strains are resistant), Salmonella sp (including S. typhi), Serratia sp (including S. marcescens), Shigella sp, Vibrio sp (including V. cholerae), Yersinia sp (including Y. enterocolitica).
Note: Many strains of the previously-mentioned organisms that are multiple-resistant to other antibiotics, eg penicillins, older cephalosporins and aminoglycosides, are susceptible to ceftriaxone. Treponema pallidum is sensitive in vitro and in animal experiments. Clinical investigations indicate that primary and secondary syphilis respond well to ceftriaxone therapy.
Anaerobic Organisms: Bacteroides (including some strains of B. fragilis). Clostridium (except C. difficile), Fusobacterium, Peptococcus and Peptostreptococcus spp.
Note: Many strains of β-lactamase-producing Bacteroides sp (notably B. fragilis) are resistant.