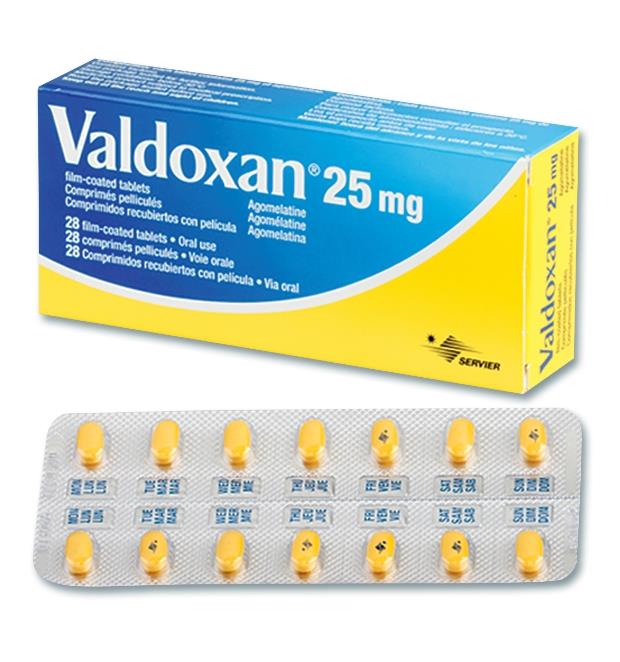 Other undesirable effects for Valdoxan 25 mg: Frequency unknown ≥1/1,000 to <1/100: Myalgia.
Reporting of Suspected Adverse Reactions: Reporting suspected adverse reactions after authorisation of Valdoxan is important. It allows continued monitoring of the benefit/risk balance of Valdoxan. Healthcare professionals are asked to report any suspected adverse reactions via the national reporting system.
View ADR Monitoring Form
Drug Interactions
Potential Interactions Affecting Agomelatine: Agomelatine is metabolised mainly by cytochrome P450 (CYP450) 1A2 (CYP1A2) (90%) and by CYP2C9/19 (10%). Medicinal products that interact with these isoenzymes may decrease or increase the bioavailability of agomelatine.
Fluvoxamine, a potent CYP1A2 and moderate CYP2C9 inhibitor markedly inhibits the metabolism of agomelatine resulting in a 60-fold (range 12-412) increase of agomelatine exposure. Consequently, co-administration of Valdoxan with potent CYP1A2 inhibitors (eg, fluvoxamine, ciprofloxacin) is contraindicated.
Combination of agomelatine with oestrogens (moderate CYP1A2 inhibitors) results in a several fold increased exposure of agomelatine. While there was no specific safety signal in the 800 patients treated in combination with oestrogens, caution should be exercised when prescribing agomelatine with other moderate CYP1A2 inhibitors (eg, propranolol, enoxacin) until more experience has been gained.
Rifampicin, an inducer of all 3 cytochromes involved in the metabolism of agomelatine may decrease the bioavailability of agomelatine.
Smoking induces CYP1A2 and has been shown to decrease the bioavailability of agomelatine, especially in heavy smokers (>15 cigarettes/day).
Potential for Agomelatine to Affect Other Medicinal Products: In vivo, agomelatine does not induce CYP450 isoenzymes. Agomelatine inhibits neither CYP1A2 in vivo nor the other CYP450 in vitro. Therefore, agomelatine will not modify exposure to medicinal products metabolised by CYP450.
Medicinal Products Highly Bound to Plasma Protein: Agomelatine does not modify free concentrations of medicinal products highly bound to plasma proteins or vice versa.
Other Medicinal Products: No evidence of pharmacokinetic or pharmacodynamic interaction with medicinal products which could be prescribed concomitantly with Valdoxan in the target population was found in phase I clinical trials: Benzodiazepines, lithium, paroxetine, fluconazole and theophylline.
Alcohol: The combination of Valdoxan and alcohol is not advisable.
Electroconvulsive Therapy (ECT): There is no experience of concurrent use of agomelatine with ECT. Animal studies have not shown proconvulsant properties. Therefore, clinical consequences of ECT concomitant treatment with Valdoxan are considered to be unlikely.
Paediatric Population: Interaction studies have only been performed in adults.
Storage
Store in a dry place below 30°C.
Shelf-Life: 3 years.
MIMS Class
Antidepressants
ATC Classification
N06AX22 - agomelatine ; Belongs to the class of other antidepressants.