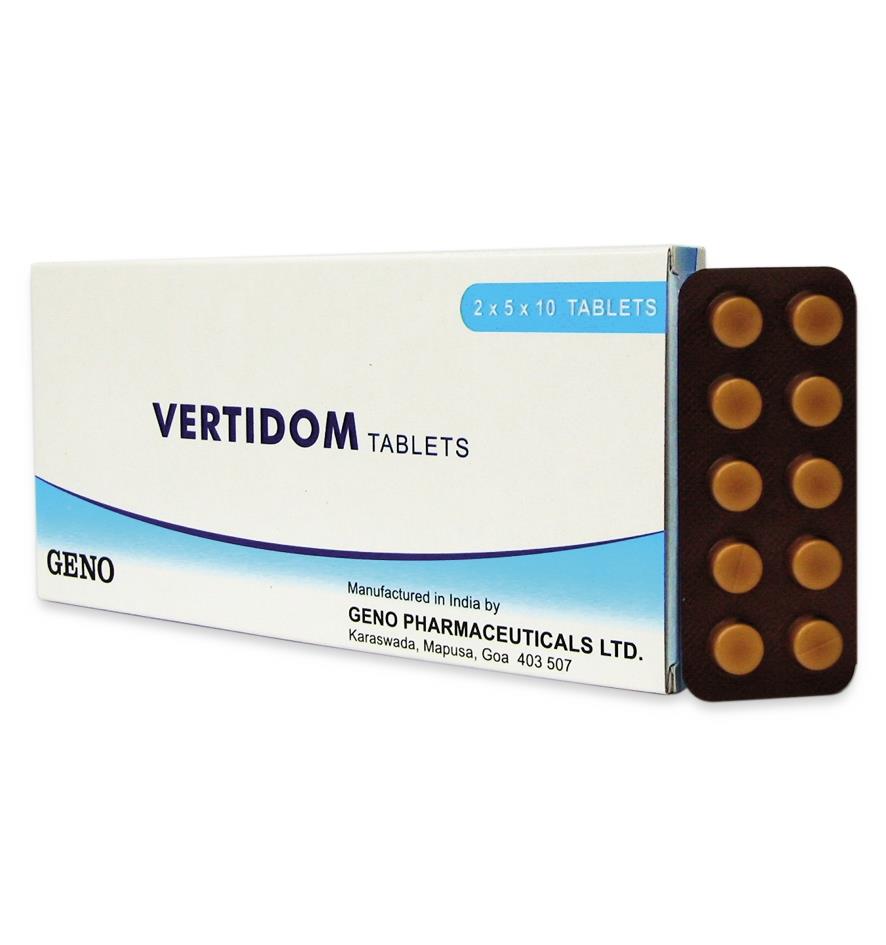 Concise Prescribing Info Full Prescribing Info Contents Description Action Indications/Uses Dosage/Direction for Use Contraindications Special Precautions Use In Pregnancy & Lactation Side Effects Drug Interactions Storage MIMS Class ATC Classification Regulatory Classification Presentation/Packing
Full Prescribing Info
Contents
Cinnarizine, domperidone maleate.
Description
Each tablet contains cinnarizine 20 mg and domperidone maleate equivalent to domperidone 15 mg.
Action
Pharmacological Classification: Antiemetics and antivertigo preparations.
Pharmacology: Cinnarizine: Cinnarizine inhibits contractions of vascular smooth muscle cells by blocking calcium channels. Cinnarizine increases erythrocyte deformability and decreases blood viscosity in vitro. Cinnarizine inhibits stimulation of the vestibular system.
The peak plasma levels of cinnarizine are obtained 1-3 hrs after intake. Cinnarizine disappears from plasma with a t½ of 4 hrs. Cinnarizine is completely metabolised. About 1/3 of these metabolites are eliminated in the urine and 2/3 in the faeces. The plasma protein-binding of cinnarizine is 91%.
Domperidone: Domperidone is a dopamine-receptor blocking agent. Its action on the dopamine receptors in the chemo-emetic trigger zone produces an antiemetic effect.
Domperidone does not cross the blood-brain barrier to any appreciable degree and so exerts relatively little effect on cerebral dopaminergic receptors.
Domperidone has been shown to increase the duration of antral and duodenal contractions to increase gastric emptying.
Domperidone does not alter gastric secretions and has no effect on intracranial pressure or on the cardiovascular system.
Domperidone is rapidly absorbed with peak plasma concentrations approximately 1 hr after oral administration.
The absolute bioavailability of oral domperidone is low (approximately 15%) due to first-pass hepatic and intestinal metabolism.
Domperidone is 91-93% bound to plasma proteins. The plasma t½ after a single oral dose is 7-9 hrs in healthy subjects but is prolonged in patients with severe renal insufficiency.
Urinary and faecal excretion amount to 31% and 66% of the oral dose, respectively. The proportion of drug excreted unchanged is small (approximately 1% of urinary and 10% of faecal excretion).
Indications/Uses
Vertidom is a wider spectrum antiemetic that is indicated in nausea and vomiting which have multiple etiology like migraine and headache, motion sickness, blurred vision, labyrinthine disorders and even drug-induced GI irritation.
Dosage/Direction for Use
As directed by the physician.
Contraindications
Known hypersensitivity to any of the contents of Vertidom.
Vertidom should not be used whenever stimulation of gastric motility is to be avoided or could be harmful, eg, in the presence of GI haemorrhage, obstruction or perforation.
Patients with a prolactin-releasing pituitary tumour (prolactinoma).
Special Precautions
Effects on the Ability to Drive or Operate Machinery: Vertidom may lead to drowsiness and impaired concentration, which may be aggravated by simultaneous intake of alcohol or other central nervous system (CNS) depressants. Patients should not operate hazardous machinery or drive motor vehicles or perform potentially hazardous tasks where loss of concentration may lead to accidents.
Use in pregnancy & lactation: The safety of use during pregnancy and lactation has not been established.
Use In Pregnancy & Lactation
The safety of use during pregnancy and lactation has not been established.
Side Effects
The most common antihistaminic side effect of cinnarizine is sedation which can vary from slight drowsiness to deep sleep, which includes inability to concentrate, lassitude, dizziness and incoordination. Sedative effects, when they occur, may diminish after a few days.
Cinnarizine may also produce antimuscarinic effects eg, blurred vision, difficulty in micturition, dysuria, dryness of mouth and tightness of chest.
Central effects may include muscular weakness, headache and euphoria.
Weight gain, perspiration or allergic reactions may be observed. Cases of lichen planus and lupus-like symptoms and an isolated case of cholestatic jaundice have been reported.
In elderly people, cases of aggravation or an appearance of extrapyramidal symptoms sometimes associated with depressive feelings have been described during prolonged therapy. The treatment should be discontinued in such cases.
Domperidone has been reported to show allergic reactions eg, rash or urticaria.
Abdominal cramps have been reported. Dystonic reactions (extrapyramidal phenomena) may occur.
Reversible raised serum prolactin levels have been observed which may lead to galactorrhoea and gynaecomastia. Hypertensive crises in patients with phaeochromocytoma may occur with administration of domperidone. Where the blood-brain barrier is not fully developed (mainly in young babies) or is impaired, the possible occurrence of neurological side effects cannot be totally excluded.
Drug Interactions
Cinnarizine may enhance the sedative effect of CNS depressants including alcohol, barbiturates, hypnotics, narcotic analgesics, tricyclic antidepressants, sedative and tranquilisers.
The side effects of anticholinergic substances eg, atropine and tricyclic antidepressants may be enhanced by the concomitant administration of antihistamines.
Monoamine oxidase inhibitors may enhance the antimuscarinic effects of antihistamines.
Domperidone: Concomitant administration of anticholinergic drugs may inhibit the anti-dyspeptic effects of domperidone. Antimuscarinic agents and opioid analgesics may antagonise the effect of domperidone. Domperidone suppresses the peripheral effects (digestive disorders, nausea and vomiting) of dopaminergic agonists. Since domperidone has gastrokinetic effects, it could influence the absorption of concomitant orally administered medicines, particularly those with sustained-release or enteric-coated formulations. As domperidone interferes with serum prolactin levels, it may interfere with other hypoprolactinaemic agents and with some diagnostic tests.
Antacids and antisecretory agents lower the oral bioavailability of domperidone. They should be taken after meals and not before meals ie, they should not be taken simultaneously with domperidone.
Reduced gastric acidity impairs the absorption of domperidone.
Oral bioavailability is decreased by prior administration of cimetidine or sodium bicarbonate.
The main metabolic pathway of domperidone is through CYP3A4. In vitro data suggests that concomitant use of drugs that significantly inhibit this enzyme may result in increased plasma levels of domperidone. Examples of CYP3A4 inhibitors include: Azole antifungals, macrolide antibiotics, HIV-protease inhibitors, nefazodone.
Storage
Store in a cool, dark and dry place.
MIMS Class
Antiemetics / Antivertigo Drugs
ATC Classification
N07CA52 - cinnarizine, combinations ; Belongs to the class of antivertigo preparations.