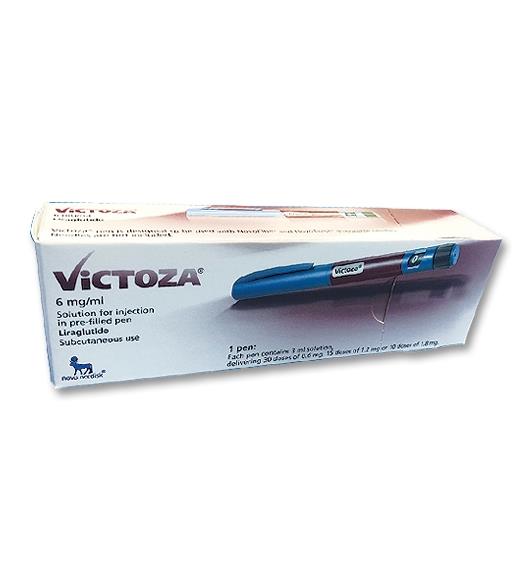 Titration of the insulin glargine dose was managed by the patient after instruction by the investigator: See Table 2.

Combination with insulin: In a 104-week clinical trial, 57% of patients with type 2 diabetes treated with insulin degludec in combination with metformin achieved a target HbA1c <7% and the remaining patients continued in a 26-week open label trial and were randomised to add liraglutide or a single dose of insulin aspart (with the largest meal). In the insulin degludec + liraglutide arm, the insulin dose was reduced by 20% in order to minimize the risk of hypoglycaemia. Addition of liraglutide resulted in a statistically significantly greater reduction of HbA1c (-0.73% for liraglutide vs -0.40% for comparator) and body weight (-3.03 vs 0.72 kg). The rate of hypoglycaemic episodes (per patient year of exposure) was statistically significantly lower when adding liraglutide compared to adding a single dose of insulin aspart (1.0 vs 8.15; ratio: 0.13; 95% CI: 0.08 to 0.21).
In a 52-week clinical trial, the addition of insulin detemir to liraglutide 1.8 mg and metformin in patients not achieving glycaemic targets on liraglutide and metformin alone resulted in a HbA1c decrease from baseline of 0.54%, compared to 0.20% in the liraglutide 1.8 mg and metformin control group. Weight loss was sustained. There was a small increase in the rate of minor hypoglycaemic episodes (0.23 versus 0.03 events per patient years).
In the LEADER trial, (see Cardiovascular evaluation as follows), 873 patients were on premix insulin (with or without OAD(s)) at baseline and at least for the following 26 weeks. The mean HbA1c at baseline was 8.7% for liraglutide and placebo. At week 26, the estimated mean change in HbA1c was -1.4% and -0.5% for liraglutide and placebo, respectively, with an estimated treatment difference of -0.9 [-1.00; -0.70]95% CI. The safety profile of liraglutide in combination with premix insulin was overall comparable to that observed for placebo in combination with premix insulin (see Adverse Reactions).
Use in patients with renal impairment: In a double-blind trial comparing the efficacy and safety of liraglutide 1.8 mg versus placebo as add-on to insulin and/or OAD in patients with type 2 diabetes and moderate renal impairment, liraglutide was superior to placebo treatment in reducing HbA1c after 26 weeks (-1.05% vs -0.38%). Significantly more patients achieved HbA1c below 7% with liraglutide compared with placebo (52.8% vs 19.5%). In both groups a decrease in body weight was seen: -2.4 kg with liraglutide vs -1.09 kg with placebo. There was a comparable risk of hypoglycaemic episodes between the two treatment groups. The safety profile of liraglutide was generally similar to that observed in other studies with liraglutide.
Proportion of patients achieving reductions in HbA1c: Liraglutide alone resulted in a statistically significant greater proportion of patients achieving HbA1c ≤6.5% at 52 weeks compared with patients receiving glimepiride (37.6% for 1.8 mg and 28.0% for 1.2 mg vs 16.2% for comparator).
Liraglutide in combination with metformin, glimepiride, metformin and rosiglitazone or SGLT2i ± metformin resulted in a statistically significant greater proportion of patients achieving an HbA1c ≤6.5% at 26 weeks compared with patients receiving these agents alone.
Fasting plasma glucose: Treatment with liraglutide alone and in combination with one or two oral antidiabetic drugs resulted in a reduction in fasting plasma glucose of 13-43.5 mg/dl (0.72-2.42 mmol/l). This reduction was observed within the first two weeks of treatment.
Postprandial glucose: Liraglutide reduced postprandial glucose across all three daily meals by 31-49 mg/dl (1.68-2.71 mmol/l).
Beta-cell function: Clinical trials with liraglutide indicate improved beta-cell function based on measures such as the homeostasis model assessment for beta-cell function (HOMA-B) and the proinsulin to insulin ratio. Improved first and second phase insulin secretion after 52 weeks treatment with liraglutide was demonstrated in a subset of patients with type 2 diabetes (n=29).
Body weight: Treatment with liraglutide in combination with metformin, metformin and glimepiride, metformin and rosiglitazone or SGLT2i with or without metformin was associated with a sustained weight reduction in the range from 0.86 kg to 2.62 kg compared with placebo.
Larger weight reduction was observed with increasing body mass index (BMI) at baseline.
Cardiovascular evaluation: Post-hoc analysis of serious major adverse cardiovascular events (cardiovascular death, myocardial infarction, stroke) from all intermediate and long-term phase 2 and 3 trials (ranging from 26 and up to 100 weeks duration) including 5,607 patients (3,651 exposed to liraglutide), showed no increase in cardiovascular risk (incidence ratio of 0.75 (95% CI 0.35; 1.63)) for liraglutide versus all comparators.
The Liraglutide Effect and Action in Diabetes Evaluation of Cardiovascular Outcome Results (LEADER) trial, was a multicentre, placebo-controlled, double-blind clinical trial. 9,340 patients were randomly allocated to either liraglutide (4,668) or placebo (4,672), both in addition to standards of care for HbA1c and cardiovascular (CV) risk factors. Primary outcome or vital status at end of trial was available for 99.7% and 99.6% of participants randomised to liraglutide and placebo, respectively. The duration of observation was a minimum of 3.5 years and up to a maximum of 5 years. The study population included patients ≥65 years (n=4,329) and ≥75 years (n=836) and patients with mild (n=3,907), moderate (n=1,934) or severe (n=224) renal impairment. The mean age was 64 years and the mean BMI was 32.5 kg/m2. The mean duration of diabetes was 12.8 years.
The primary endpoint was the time from randomisation to first occurrence of any major adverse cardiovascular events (MACE): CV death, non-fatal myocardial infarction or non-fatal stroke. Liraglutide was superior in preventing MACE vs placebo (Figure 1). The estimated hazard ratio was consistently below 1 for all 3 MACE components.
Liraglutide also significantly reduced the risk of expanded MACE (primary MACE, unstable angina pectoris leading to hospitalisation, coronary revascularisation, or hospitalisation due to heart failure) and other secondary endpoints (Figure 2). (See Figures 1 and 2.)