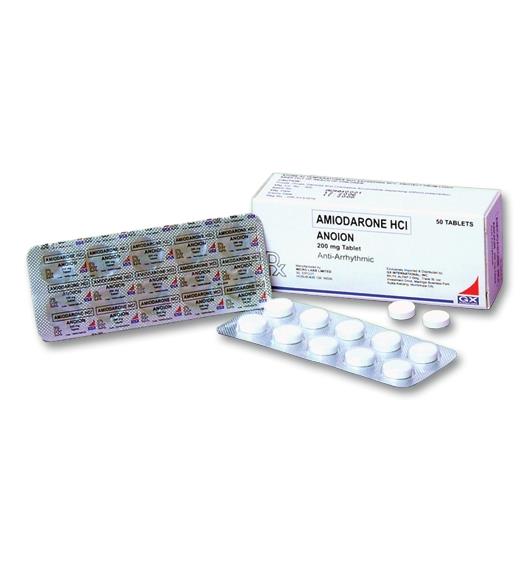 Concise Prescribing Info Full Prescribing Info Contents Description Action Indications/Uses Dosage/Direction for Use Overdosage Contraindications Special Precautions Adverse Reactions Drug Interactions Storage MIMS Class ATC Classification Regulatory Classification Presentation/Packing
Full Prescribing Info
Contents
Amiodarone hydrochloride.
Description
Each tablet contains: Amiodarone Hydrochloride, USP 200 mg.
Action
Pharmacological Category: Amiodarone hydrochloride is a member of anti-arrhythmic drugs with predominantly class III (Vaughan Williams' classification) effects.
Pharmacology: Mechanism of Action: The anti-arrhythmic effect of Amiodarone HCl may be due to at least two major properties: A prolongation of the myocardial cell-action potential duration and refractory period and noncompetitive alpha and beta-adrenergic inhibition.
Pharmacokinetics: Amiodarone is absorbed variably and erratically from the gastrointestinal tract. It is extensively distributed to body tissues and accumulates notably in muscle and fat; it has been reported to be about 96% bound to plasma proteins. The terminal elimination half-life is about 50 days with a range of about 20 to 100 days due to its extensive tissue distribution. On stopping prolonged amiodarone therapy a pharmacological effect is evident for a month or more. A major metabolite, desethylamiodarone, has anti-arrhythmic properties. There is very little urinary excretion being in faeces via the bile; some enterohepatic recycling may occur. Amiodarone and desethylamiodarone are reported to cross the placenta and to be distributed into breast milk.
Indications/Uses
Amiodarone HCl is mainly indicated in life-threatening recurrent ventricular arrhythmias, including arrhythmias associated with Wolff-Parkinson-White syndrome. It has been tried for the prevention of arrhythmias in patients with myocardial infarction or heart failure.
Dosage/Direction for Use
Amiodarone is given by mouth as the hydrochloride in initial doses of 200 mg three times daily for a week, then 200 mg twice daily for a week, and then a usual maintenance dosage of 200 mg or less daily, according to patient's response. Loading doses of 800 to 1,600 mg/day are required for 1 to 3 weeks (occasionally longer) until initial therapeutic response occurs. When adequate arrhythmia control is achieved or if side effects become prominent. Amiodarone HCl dose should be reduced to 600 to 800 mg/day for one month and then to the maintenance dose usually 400 mg/day or as prescribed by the physician.
Overdosage
There have been few reported cases of Amiodarone HCl overdosage in which 3 to 8 grams were taken. There were no deaths or permanent sequelae. In addition to general supportive measures, the patient's cardiac rhythm and blood pressure should be monitored, and if bradycardia ensues, a beta adrenergic agonist or a pacemaker may be used.
Contraindications
Amiodarone HCl is contraindicated in severe sinus-node dysfunction, causing marked sinus bradycardia; second and third-degree atrioventricular block; and when episodes of bradycardia have caused syncope (except when used in conjunction with a pacemaker). Amiodarone HCl is contraindicated in patients with a known hypersensitivity to the drug.
Special Precautions
Amiodarone should not be given to patients with bradycardia, sinoatrial block, AV block or other severe conduction disorders (unless the patient has a pacemaker), severe respiratory failure. It may be used with caution in patients with heart failure. Electrolyte disorders should be corrected before starting treatment. The use of amiodarone should be avoided in patients with iodine sensitivity, or evidence of history of thyroid disorders. Patients taking amiodarone should avoid exposure to sunlight.
Adverse Reactions
Adverse effects are common with amiodarone, many are dose-related and reversible with reduction in dose.
Adverse cardiovascular effects associated with amiodarone include severe bradycardia, sinus arrest, and conduction disturbances. Severe hypotension may follow intravenous use particularly, though not exclusively, at rapid infusion rates. Amiodarone may also produce ventricular tachyarrhythmias, torsade de pointes appears to be less of a problem with amiodarone than other anti-arrhythmics. Rarely, heart failure may be precipitated or aggravated. There have been reports of severe pulmonary toxicity including pulmonary fibrosis and interstitial pneumonitis. These effects are usually reversible on withdrawal of amiodarone but are potentially fatal. Amiodarone can adversely affect the liver. There may be abnormal liver function tests and cirrhosis or hepatitis; fatalities have been reported.
View ADR Monitoring Form
Drug Interactions
Amiodarone should be used with caution with other drugs liable to induce bradycardia, such as beta blockers or calcium-channel blockers, and with other anti-arrhythmic drugs. Use with arrhythmogenic drugs, for example phenothiazine antipsychotics, tricyclic antidepressants, halofantrine, and terfenadine, should be avoided. Amiodarone is metabolized by the cytochrome P450 isoenzyme CYP3A4 and CYP2C8 and interactions may occur with inhibitors of these enzymes, such as HIV-protease inhibitors, cimetidine and grapefruit juice. Enzyme inducers such as rifampicin and phenytoin may reduce amiodarone levels. In addition, amiodarone is an inhibitor of some cytochrome P450 isoenzymes, including CYP3A4 and CYP2D6, resulting in higher plasma concentrations of other drugs metabolized by these enzymes. Examples of these include ciclosporin, clonazepam, digoxin, flecainide, phenytoin, procainamide, quinidine, simvastatin, and warfarin.
Storage
Store at temperatures not exceeding 30°C. Protect from light.
MIMS Class
Cardiac Drugs
ATC Classification
C01BD01 - amiodarone ; Belongs to class III antiarrhythmics.