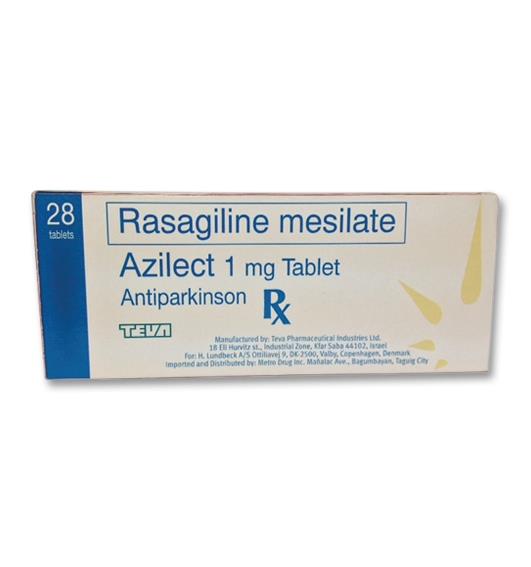 Concise Prescribing Info Full Prescribing Info Contents Description Action Indications/Uses Dosage/Direction for Use Overdosage Contraindications Special Precautions Use In Pregnancy & Lactation Adverse Reactions Drug Interactions Storage MIMS Class ATC Classification Regulatory Classification Presentation/Packing
Full Prescribing Info
Special Precautions
The concomitant use of rasagiline and fluoxetine or fluvoxamine should be avoided. At least 5 weeks should elapse between discontinuation of fluoxetine and initiation of treatment with rasagiline. At least 14 days should elapse between discontinuation of rasagiline and initiation of treatment with fluoxetine or fluvoxamine.
The concomitant use of rasagiline and dextromethorphan or sympathomimetics eg, those present in nasal and oral decongestants or cold medicinal product containing ephedrine or pseudoephedrine is not recommended.
During the clinical development program, the occurrence of cases of melanoma prompted the consideration of a possible association with rasagiline. The data collected suggests that Parkinson’s disease, and not any medicinal products in particular, is associated with a higher risk of skin cancer (not exclusively melanoma). Any suspicious skin lesion should be evaluated by a specialist.
Caution should be used when initiating treatment with rasagiline in patients with mild hepatic impairment. Rasagiline use in patients with moderate hepatic impairment should be avoided. In case patients progress from mild to moderate hepatic impairment, rasagiline should be stopped.
Effects on the Ability to Drive or Operate Machinery: No studies on the effects on the ability to drive and use machines have been performed. Patients should be cautioned about operating hazardous machines, including motor vehicles, until they are reasonably certain that rasagiline does not affect them adversely.
Use in pregnancy & lactation: For rasagiline, no clinical data on exposed pregnancies is available. Animal studies do not indicate direct or indirect harmful effects with respect to pregnancy, embryonal/foetal development, parturition or postnatal development (see Toxicology: Preclinical Safety Data under Pharmacology under Actions). Caution should be exercised when prescribing to pregnant women.
Experimental data indicated that rasagiline inhibits prolactin secretion and, thus, may inhibit lactation. It is not known whether rasagiline is excreted in human milk. Caution should be exercised when rasagiline is administered to a breastfeeding mother.
Use in children: Rasagiline is not recommended for use in children and adolescents due to lack of data on safety and efficacy.