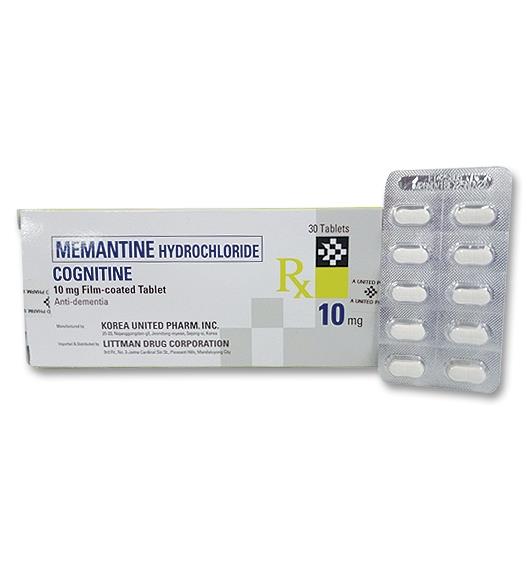 NEW Brand Resources
Concise Prescribing Info Full Prescribing Info Contents Description Action Indications/Uses Dosage/Direction for Use Overdosage Contraindications Special Precautions Use In Pregnancy & Lactation Adverse Reactions Drug Interactions Storage MIMS Class ATC Classification Regulatory Classification Presentation/Packing Brand Resources
Full Prescribing Info
Contents
Memantine hydrochloride.
Description
Each film-coated tablet contains Memantine Hydrochloride 10 mg.
Action
Pharmacology: Pharmacodynamics: There is increasing evidence that malfunctioning of glutamatergic neurotransmission, in particular at NMDA-receptors, contributes to both expression of symptoms and disease progression in neurodegenerative dementia.
Memantine is a voltage-dependent, moderate-affinity uncompetitive NMDA-receptor antagonist. It modulates the effects of pathologically elevated tonic levels of glutamate that may lead to neuronal dysfunction.
Clinical studies: A pivotal monotherapy study in a population of patients suffering from moderate to severe Alzheimer's disease (mini mental state examination (MMSE) total scores at baseline of 3-14) included a total of 252 outpatients. The study showed beneficial effects of memantine treatment in comparison to placebo at 6 months (observed cases analysis for the clinician´s interview based impression of change (CIBIC-plus): p=0.025; Alzheimer's disease cooperative study, activities of daily living (ADCS-ADLsev): p=0.003; severe impairment battery (SIB): p=0.002).
A pivotal monotherapy study of memantine in the treatment of mild to moderate Alzheimer's disease (MMSE total scores at baseline of 10 to 22) included 403 patients. Memantine-treated patients showed a statistically significantly better effect than placebo-treated patients on the primary endpoints: Alzheimer's disease assessment scale (ADAS-cog) (p=0.003) and CIBIC-plus (p=0.004) at week 24 (last observation carried forward (LOCF)). In another monotherapy study in mild to moderate Alzheimer's disease a total of 470 patients (MMSE total scores at baseline of 11-23) were randomised. In the prospectively defined primary analysis statistical significance was not reached at the primary efficacy endpoint at week 24.
A meta-analysis of patients with moderate to severe Alzheimer's disease (MMSE total scores <20) from the six phase III, placebo-controlled, 6-month studies (including monotherapy studies and studies with patients on a stable dose of acetylcholinesterase inhibitors) showed that there was a statistically significant effect in favour of memantine treatment for the cognitive, global, and functional domains. When patients were identified with concurrent worsening in all three domains, results showed a statistically significant effect of memantine in preventing worsening, as twice as many placebo-treated patients as memantine- treated patients showed worsening in all three domains (21% vs. 11%, p<0.0001).
Pharmacokinetics: Absorption: Memantine has an absolute bioavailability of approximately 100%. Tmax is between 3 and 8 hours. There is no indication that food influences the absorption of memantine.
Distribution: Daily doses of 20 mg lead to steady-state plasma concentrations of memantine ranging from 70 to 150 ng/ml (0.5-1 μmol) with large interindividual variations. When daily doses of 5 to 30 mg were administered, a mean cerebrospinal fluid (CSF)/serum ratio of 0.52 was calculated. The volume of distribution is around 10 l/kg. About 45% of memantine is bound to plasma-proteins.
Biotransformation: In man, about 80% of the circulating memantine-related material is present as the parent compound. Main human metabolites are N-3,5-dimethyl-gludantan, the isomeric mixture of 4- and 6-hydroxy-memantine, and 1-nitroso-3,5-dimethyl-adamantane. None of these metabolites exhibit NMDA- antagonistic activity. No cytochrome P450 catalysed metabolism has been detected in vitro.
In a study using orally administered 14C-memantine, a mean of 84% of the dose was recovered within 20 days, more than 99% being excreted renally.
Elimination: Memantine is eliminated in a monoexponential manner with a terminal t½ of 60 to 100 hours. In volunteers with normal kidney function, total clearance (Cltot) amounts to 170 ml/min/1.73 m2 and part of total renal clearance is achieved by tubular secretion.
Renal handling also involves tubular reabsorption, probably mediated by cation transport proteins. The renal elimination rate of memantine under alkaline urine conditions may be reduced by a factor of 7 to 9. Alkalisation of urine may result from drastic changes in diet, e.g. from a carnivore to a vegetarian diet, or from the massive ingestion of alkalising gastric buffers.
Linearity: Studies in volunteers have demonstrated linear pharmacokinetics in the dose range of 10 to 40 mg.
Pharmacokinetic/pharmacodynamic relationship: At a dose of memantine of 20 mg per day the CSF levels match the ki-value (ki = inhibition constant) of memantine, which is 0.5 μmol in human frontal cortex.
Indications/Uses
Memantine hydrochloride is used for the treatment of patients with moderate to severe Alzheimer’s disease.
Dosage/Direction for Use
Treatment should be initiated and supervised by a physician experienced in the diagnosis and treatment of Alzheimer's dementia. Therapy should only be started if a caregiver is available who will regularly monitor the intake of the medicinal product by the patient. Diagnosis should be made according to current guidelines. Memantine Hydrochloride can be taken with or without food. Adults (more than 18 years): The maximum daily dose is 20 mg daily. In order to lower the risk of side effects, this dose should be introduced gradually according to the following daily treatment plan: See Table 1.

Elderly: On the basis of the clinical studies, the recommended dose for patients over the age of 65 years is 20 mg per day (two 10 mg tablets) as described above.
Renal impairment: In patients with mildly impaired renal function (concentration of creatine in plasma: less than 130 μmol/L), no dosage adjustment is required. In patients with severe renal impairment (creatinine clearance: 40-60 mL/min/1.73 m2), the daily dose should be 10 mg per day.
Overdosage
One patient who had received 400 mg memantine orally, experienced central nervous system symptoms such as restlessness, psychosis, visual hallucinations, proconvulsiveness, somnolence, stupor, and unconsciousness. Symptomatic treatment should be initiated.
Contraindications
Patients with known hypersensitivity to the drug.
Patients with severe hepatic disorder.
Patients with severe renal disorder (creatinine clearance <9 mL/min/1.73 m2).
Special Precautions
Patients with epilepsy.
Simultaneous use of medications with active ingredients such as amantadine, ketamine, dextromethorphan as well as other NMDA (N-methyl-D-aspartate) antagonists should be avoided.
Some factors that may raise urine pH may necessitate careful monitoring of the patient. These factors include drastic changes in diet, e.g. from a carnivore to a vegetarian diet, or a massive ingestion of alkalising gastric buffers. Also, urine pH may be elevated by states of renal tubulary acidosis (RTA) or severe infections of the urinary tract with Proteus bacteria.
Patients who have recently suffered a myocardial infarction (heart attack) or from under-compensated cardiac insufficiency or untreated high blood pressure.
Moderate to severe Alzheimer's disease usually causes impairment of driving performance and compromises the ability to use machinery. Furthermore, Memantine has minor or moderate influence on the ability to drive and use machines, such that outpatients should take special care.
Use in Children: Memantine is not recommended for use in children below 18 years due to a lack of data on safety and efficacy.
Use In Pregnancy & Lactation
For memantine, no clinical data on exposed pregnancies are available. Animal studies indicate a potential for reducing intrauterine growth at exposure levels that are identical or slightly higher than at human exposure. The potential risk for humans is unknown. Memantine should not be used during pregnancy unless clearly necessary.
It is not known whether memantine is excreted in human breast milk but, taking into consideration the lipophilicity of the substance, this probably occurs. Women taking memantine should not breast-feed.
Adverse Reactions
The reported adverse events in Memantine hydrochloride trials reflect experience gained under closely monitored conditions in a highly selected patient population. In actual practice or in other clinical trials, these frequency estimates may not apply, as the conditions of use, reporting behavior and the types of patients treated may differ. Table below lists treatment-emergent signs and symptoms that were reported in at least 2% of patients in placebo-controlled dementia trials and for which the rate of occurrence was greater for patients treated with Memantine than for those treated with placebo. No adverse event occurred at a frequency of at least 5% and twice the placebo rate. See Table 2.

View ADR Monitoring Form
Drug Interactions
The mode of action suggests that the effects of L-dopa, dopaminergic agonists, and anticholinergics may be enhanced by concomitant treatment with NMDA-antagonists such as memantine.
The effects of barbiturates and neuroleptics may be reduced.
Concomitant administration of memantine with the antispasmodic agents, dantrolene or baclofen, can modify their effects and a dosage adjustment may be necessary.
Concomitant use of N-methyl-D-aspartate (NMDA)-antagonists such as amantadine, ketamine or dextromethorphan should be avoided. These compounds act at the same receptor system as memantine, and therefore adverse drug reactions (mainly CNS-related) may be more frequent or more pronounced.
There is one published case report on a possible risk also for the combination of memantine and phenytoin.
Other active substances such as such as cimetidine, ranitidine, procainamide, quinidine, quinine and nicotine that use the same renal cationic transport system as amantadine may also possibly interact with memantine leading to a potential risk of increased plasma levels.
There may be a possibility of reduced serum level of hydrochlorothiazide (HCT) when memantine is co- administered with HCT or any combination with HCT.
Memantine did not inhibit CYP 1A2, 2A6, 2C9, 2D6, 2E1, 3A, flavin-containing monooxygenase, epoxide hydrolase or sulphation in vitro.
Storage
Store at temperatures not exceeding 30°C.
MIMS Class
Neurodegenerative Disease Drugs
ATC Classification
N06DX01 - memantine ; Belongs to the class of other anti-dementia drugs.

Regulatory Classification
Rx
Presentation/Packing
FC tab (white to off-white, modified-oblong, scored on both sides, with "E" and "10" markings on one side) 10 mg x 30's.