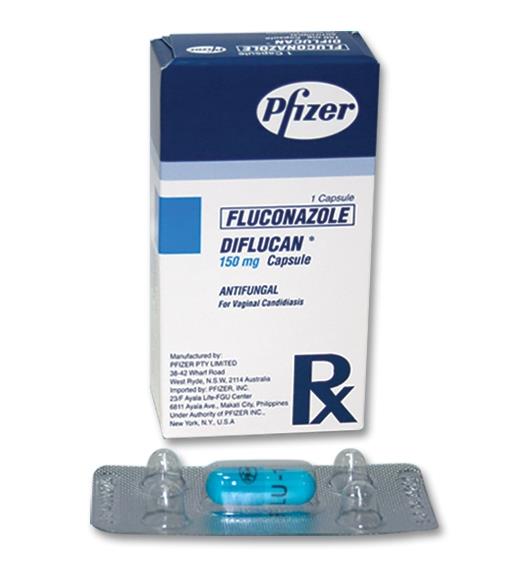 Concise Prescribing Info Full Prescribing Info Contents Description Action Indications/Uses Dosage/Direction for Use Overdosage Contraindications Special Precautions Use In Pregnancy & Lactation Adverse Reactions Drug Interactions Caution For Usage Storage MIMS Class ATC Classification Regulatory Classification Presentation/Packing
Full Prescribing Info
Contents
Fluconazole.
Description
Fluconazole (Diflucan) 50 mg Capsule: Each capsule contains 50 mg fluconazole.
Fluconazole (Diflucan) 150 mg Capsule: Each capsule contains 150 mg fluconazole.
Fluconazole (Diflucan) 200 mg Capsule: Each capsule contains 200 mg fluconazole.
Fluconazole (Diflucan) 2 mg/mL Solution for Injection (I.V.): Each mL contains 2 mg fluconazole in a saline solution for intravenous infusion.
Fluconazole (Diflucan) is designated chemically as 2, 4-difluoro-α, α1-bis(1H-1,2,4-triazol-1-ylmethyl) benzyl alcohol with an empirical formula of C13H12F2N6O and molecular weight 306.3.
Fluconazole is a white crystalline solid which is slightly soluble in water and saline.
Action
Pharmacotherapeutic group: Antimycotics for systemic use, triazole derivatives. ATC code: J02AC01.
Pharmacology: Pharmacodynamics: Mode of Action: Fluconazole, a triazole antifungal agent, is a potent and specific inhibitor of fungal sterol synthesis.
Its primary mode of action is the inhibition of fungal cytochrome P-450-mediated 14-alpha-lanosterol demethylation, an essential step in fungal ergosterol biosynthesis. The accumulation of 14-alpha-methyl sterols correlates with the subsequent loss of ergosterol in the fungal cell membrane and may be responsible for the antifungal activity of fluconazole. Fluconazole has been shown to be more selective for fungal cytochrome P-450 enzymes than for various mammalian cytochrome P-450 enzyme systems.
Fluconazole is highly specific for fungal cytochrome P-450 dependent enzymes. Fluconazole 50 mg daily given up to 28 days has been shown not to affect testosterone plasma concentrations in males or steroid concentrations in females of child-bearing age. Fluconazole 200 mg to 400 mg daily has no clinically significant effect on endogenous steroid levels or on adrenocorticotropic hormone (ACTH) stimulated response in healthy male volunteers. Interaction studies with antipyrine indicate that single or multiple doses of fluconazole 50 mg do not affect its metabolism.
Pharmacokinetic/pharmacodynamic relationship: In animal studies, there is a correlation between MIC values and efficacy against experimental mycoses due to Candida spp. In clinical studies, there is an almost 1:1 linear relationship between the AUC and the dose of fluconazole. There is also a direct though imperfect relationship between the AUC or dose and a successful clinical response of oral candidosis and to a lesser extent candidemia to treatment. Similarly cure is less likely for infections caused by strains with a higher fluconazole MIC.
Microbiology: In vitro, fluconazole displays antifungal activity against most clinically common Candida species (including C. albicans, C. parapsilosis, C. tropicalis). MICs for C. glabrata and C. guilliermondii tend to be higher, while C. krusei is intrinsically resistant to fluconazole. The recently emerging species C. auris tends to be relatively resistant to fluconazole. Fluconazole also exhibits activity in vitro against Cryptococcus neoformans and Cryptococcus gattii as well as the endemic moulds Blastomyces dermatiditis, Coccidioides immitis, Histoplasma capsulatum and Paracoccidioides brasiliensis.
Both orally and intravenously administered fluconazole was active in a variety of animal fungal infection models. Activity has been demonstrated against opportunistic mycoses, such as infections with Candida spp., including systemic candidiasis in immunocompromised animals; with C. neoformans, including intracranial infections; with Microsporum spp.; and with Trichophyton spp. Fluconazole has also been shown to be active in animal models of endemic mycoses, including infections with Blastomyces dermatitidis; with Coccidioides immitis, including intracranial infection; and with Histoplasma capsulatum in normal and immunosuppressed animals.
Mechanisms of resistance: In usually susceptible species of Candida, the most commonly encountered mechanism of resistance involves the target enzymes of the azoles, which are responsible for the biosynthesis of ergosterol. Point mutations in the gene (ERG11) encoding for the target enzyme lead to an altered target with decreased affinity for azoles. Overexpression of ERG11 results in the production of high concentrations of the target enzyme, creating the need for higher intracellular drug concentrations to inhibit all of the enzyme molecules in the cell.
The second major mechanism of drug resistance involves active efflux of fluconazole out of the cell through the activation of two types of multidrug efflux transporters; the major facilitators (encoded by MDR genes) and those of the ATP-binding cassette superfamily (encoded by CDR genes). Upregulation of the MDR gene leads to fluconazole resistance, whereas, upregulation of CDR genes may lead to resistance to multiple azoles.
Resistance in Candida glabrata usually includes upregulation of CDR genes resulting in resistance to multiple azoles. For an isolate where the minimum inhibitory concentration (MIC) is 16 to 32 mg/L, the highest fluconazole dose is recommended.
There have been reports of cases of superinfection with Candida species other than C. albicans, which are often inherently not susceptible to fluconazole (e.g., Candida krusei). Such cases may require alternative antifungal therapy.
Breakpoints: EUCAST Reference Information (for markets referencing the EUCAST): Based on analyses of pharmacokinetic/pharmacodynamic (PK/PD) data, susceptibility in vitro and clinical response EUCAST AFST (European Committee on Antimicrobial Susceptibility Testing - Subcommittee on Antifungal Susceptibility Testing) has determined breakpoints for fluconazole for Candida species (EUCAST Fluconazole rationale document (2013) version 2; European Committee on Antimicrobial Susceptibility Testing, Antifungal Agents, Breakpoint tables for interpretation of MICs, Version 9.0, valid from 2018-02-12). These have been divided into non species related breakpoints, which have been determined mainly on the basis of PK/PD data and are independent of MIC distributions of specific species, and species related breakpoints for those species most frequently associated with human infection.
These breakpoints are given in the table as follows: See Table 1.

CLSI Reference Information (for markets referencing the CLSI): The susceptible (S) breakpoints recognized by the Clinical and Laboratory Standards Institute (CLSI) are the same, with the exception of C. glabrata, for which there is no S, but only an 'SDD' (susceptible dose-dependent) breakpoint of ≤32 mg/L is recognized. CLSI also characterizes 4 mg/L as SDD for C. albicans, C. parapsilosis and C. glabrata, and ≥8 mg/L as resistant (R) for these 3 species (Clinical and Laboratory Standards Institute (CLSI). Performance Standards for Antifungal Susceptibility Testing of Yeasts. 1st ed. CLSI supplement M60 (ISBN 1-56238-828-2 [Print]; ISBN 1-56238-829-0 [Electronic]). Clinical and Laboratory Standards Institute, 950 West Valley Road, Suite 2500, Wayne, Pennsylvania 19087 USA, 2017).
Pharmacokinetics: The pharmacokinetic properties of fluconazole are similar following administration by the intravenous or oral route. After oral administration, fluconazole is well absorbed, and plasma levels (and systemic bioavailability) are over 90% of the levels achieved after intravenous administration. Oral absorption is not affected by concomitant food intake. Peak plasma concentrations in the fasting state occur between 0.5 and 1.5 hours post-dose with a plasma elimination half-life of approximately 30 hours. Plasma concentrations are proportional to dose. Ninety percent steady-state levels are reached by Days 4 to 5 with multiple once-daily dosing.
Administration of loading dose (on Day 1) of twice the usual daily dose enables plasma levels to approximate to 90% steady-state levels by Day 2. The apparent volume of distribution approximates to total body water. Plasma protein binding is low (11%-12%).
Fluconazole achieves good penetration in all body fluids studied. The levels of fluconazole in saliva and sputum are similar to plasma levels. In patients with fungal meningitis, fluconazole levels in the cerebrospinal fluid (CSF) are approximately 80% the corresponding plasma levels.
High skin concentrations of fluconazole, above serum concentrations, are achieved in the stratum corneum, epidermis-dermis and eccrine sweat. Fluconazole accumulates in the stratum corneum. At a dose of 50 mg once daily, the concentration of fluconazole after 12 days was 73 μg/g, and 7 days after cessation of treatment the concentration was still 5.8 μg/g. At the 150 mg once-a-week dose, the concentration of fluconazole in stratum corneum on Day 7 was 23.4 μg/g, and 7 days after the second dose was still 7.1 μg/g.
Concentration of fluconazole in nails after 4 months of 150 mg once-a-week dosing was 4.05 μg/g in healthy and 1.8 μg/g in diseased nails; and, fluconazole was still measurable in nail samples 6 months after the end of therapy.
The major route of excretion is renal, with approximately 80% of the administered dose appearing in the urine as unchanged drug. Fluconazole clearance is proportional to creatinine clearance. There is no evidence of circulating metabolites.
The long plasma elimination half-life provides the basis for single-dose therapy for vaginal candidiasis, once-daily and once-weekly dosing for other indications.
A study compared the saliva and plasma concentrations of a single fluconazole 100 mg dose administered in a capsule or in an oral suspension* by rinsing and retaining in mouth for 2 minutes and swallowing. The maximum concentration of fluconazole in saliva after the suspension was observed 5 minutes after ingestion, and was 182 times higher than the maximum saliva concentration after the capsule which occurred 4 hours after ingestion. After about 4 hours, the saliva concentrations of fluconazole were similar. The mean AUC(0-96) in saliva was significantly greater after the suspension compared to the capsule. There was no significant difference in the elimination rate from saliva or the plasma pharmacokinetic parameters for the two formulations.
*Fluconazole oral suspension is not available locally.
A pharmacokinetic study in 10 lactating women, who had temporarily or permanently stopped breast-feeding their infants, evaluated fluconazole concentrations in plasma and breast milk for 48 hours following a single 150 mg dose of fluconazole (Diflucan). Fluconazole was detected in breast milk at an average concentration of approximately 98% of those in maternal plasma. The mean peak breast milk concentration was 2.61 mg/L at 5.2 hours post-dose.
Pharmacokinetics in Children: In children, pharmacokinetic data have been reported as follows in Table 2: See Table 2.