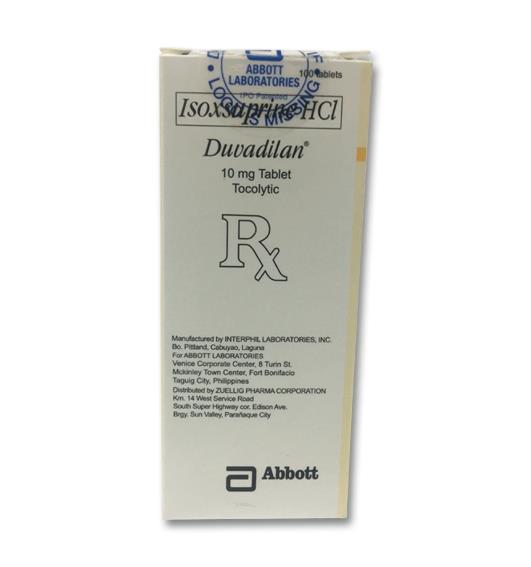 Concise Prescribing Info Full Prescribing Info Contents Description Action Indications/Uses Dosage/Direction for Use Contraindications Special Precautions Adverse Reactions Drug Interactions Storage MIMS Class ATC Classification Regulatory Classification Presentation/Packing
Full Prescribing Info
Contents
Isoxsuprine HCl.
Description
Each uncoated tablet contains the following excipients: Lactose, corn starch, gelatin, talc and magnesium stearate.
Action
Pharmacology: Pharmacodynamics: Mechanism of Action: Beta-Sympathomimetic Effect: By virtue of this effect, isoxsuprine has relaxant action on the muscular tissue of the uterus.
Alpha-Sympathomimetic Effect: Isoxsuprine antagonizes the effects of α-receptor stimulation. Some uterine contraction, which can otherwise occur because of α-receptor stimulation, gets inhibited due to this effect of isoxsuprine.
Direct Relaxant Action on the Smooth Muscle Fibers: Isoxsuprine induces a direct relaxant action on the smooth muscle fibers and so enhances those effects resulting from its action on the sympathetic receptors.
Pharmacodynamic Effects: Isoxsuprine has a strong inhibitory effect on the muscular tissue of the uterus and blood vessels. It has only a moderate effect on the smooth muscle of the respiratory, biliary and intestinal tracts. The effects of isoxsuprine are brought about mainly by its influence on the receptors in those organs responsive to stimuli from the sympathetic nervous system. Isoxsuprine HCl is a β-adrenergic receptor stimulator. Hence, it is classified as a β-agonist drug, in particular a uterine relaxant. It is also a vasodilator.
Pharmacokinetics: Isoxsuprine HCl is well absorbed from the gastrointestinal tract. The peak plasma concentration (Cmax) occur 1 hr after oral administration. Plasma t½ is 1.5 hrs. Isoxsuprine is excreted in urine mainly as conjugates.
Indications/Uses
Treatment of premature labor, cerebral and peripheral vascular disease.
Dosage/Direction for Use
For use as a vasodilator, isoxsuprine HCl is given orally in doses of 10-20 mg 3 or 4 times daily.
Arrest Premature Labor: Initially 200-500 mcg/min by IV infusion, adjusted according to the patient's response, until control is achieved. Once labor has been arrested IM injections of 10 mg are given every 3-8 hrs. Prophylaxis may be continued orally with 30-90 mg daily.
Contraindications
Preexisting Hypotension: If the blood pressure is already low eg, <100 mmHg systolic, it must be borne in mind that the administration of isoxsuprine will, in most instances, bring about a further reduction in the blood pressure.
Prolonged Premature Rupture of Membranes: If fetal membranes are ruptured/dilatation is >4 cm, chances of success are less. In the cases of prolonged premature rupture of membranes, the possible benefits to be gained from delaying emptying of the uterus must be weighed against the possibility that undue prolongation of the pregnancy may actually increase the maternal and fetal hazards.
Isoxsuprine should not be used in presence of hemorrhage.
Isoxsuprine is contraindicated after recent arterial hemorrhage.
Special Precautions
Duvadilan should not be given immediately postpartum, nor should it be used for premature labor if there is infection.
In women being treated for premature labor, the risk of pulmonary edema means that extreme caution is required.
Adverse Reactions
Isoxsuprine may cause transient nausea, vomiting, flushing, tachycardia, rashes, gastrointestinal disturbances and maternal pulmonary edema. In few cases, mainly in hypertensive patients, parenteral administration of Duvadilan may lead to transitory fall in blood pressure. A change over to oral administration or reduction in dosage will usually avoid this effect.
View ADR Monitoring Form
Drug Interactions
Incompatibilities: None known.
Storage
Store at temperatures not exceeding 25°C.
Shelf-Life: 5 years.
MIMS Class
Peripheral Vasodilators & Cerebral Activators / Drugs Acting on the Uterus
ATC Classification
C04AA01 - isoxsuprine ; Belongs to the class of 2-amino-1-phenylethanol derivative agents. Used as peripheral vasodilators.