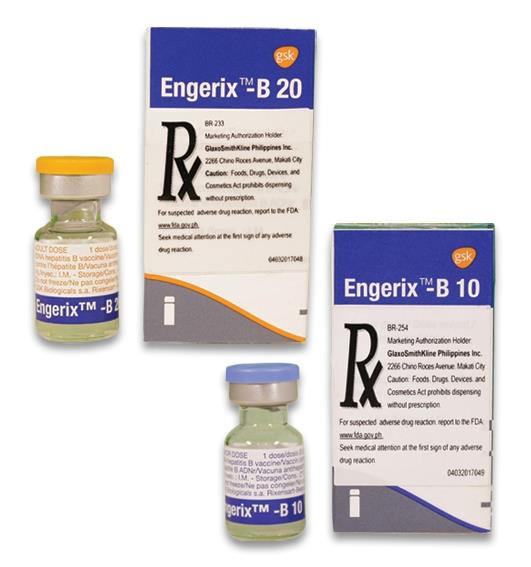 The seroprotection rates (SP) obtained with the two different dosages and schedules licensed in subjects from 11 years up to and including 15 years of age were evaluated up to 66 months after the first dose of the primary vaccination and are presented in the Table as follows: See Table 2.

These data show that a primary vaccination with Engerix-B vaccine induces circulating antiHBs antibodies that persist for at least 66 months. After having completed the primary course, at each time point there is no clinically significant difference in the seroprotection rates when comparing the 2 vaccine groups. Indeed, all subjects in both vaccine groups (including subjects with anti-HBs antibody concentrations < 10 IU/l) received a challenge dose 72 to 78 months after primary vaccination. One month after the challenge dose, all subjects mounted an anamnestic response to the challenge dose and were shown to be seroprotected (i.e. antiHBs antibody concentrations ≥ 10 IU/l). These data suggest that protection against hepatitis B may still be conferred through immune memory in all subjects who responded to primary vaccination but lost seroprotection level of anti-HBs antibodies.
Rechallenge in healthy subjects: Subjects (N=284) aged 12 to 13 years vaccinated during infancy with 3 doses of Engerix-B received a challenge dose. One month later, 98.9% of subjects were shown to be seroprotected.
Patients with renal insufficiency including patients undergoing haemodialysis: See Table 3.