Humalog Dosage/Direction for Use 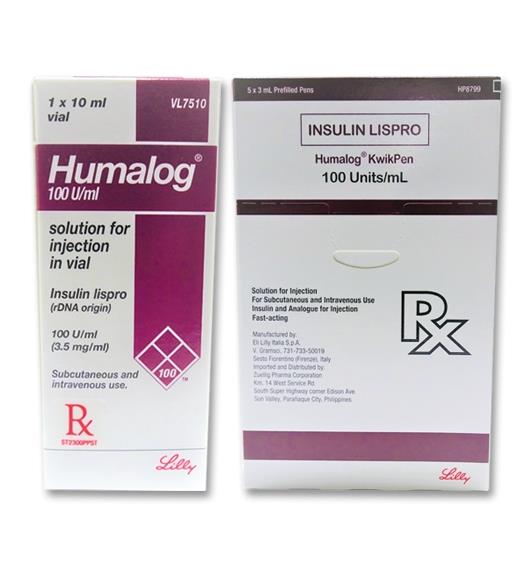 Concise Prescribing Info Full Prescribing Info Contents Description Action Indications/Uses Dosage/Direction for Use Overdosage Contraindications Special Precautions Use In Pregnancy & Lactation Adverse Reactions Drug Interactions Caution For Usage Storage MIMS Class ATC Classification Regulatory Classification Presentation/Packing
The information highlighted (if any) are the most recent updates for this brand.
Full Prescribing Info
Dosage/Direction for Use
The dosage should be determined by the physician, according to the requirement of the patient.
Insulin lispro (Humalog) may be given shortly before meals. When necessary Insulin lispro (Humalog) can be given soon after meals. Insulin lispro (Humalog) preparations should be given by subcutaneous injection. If necessary, insulin lispro (Humalog) may also be administered intravenously, for example; for the control of blood glucose levels during ketoacidosis, acute illnesses or during intra and postoperative periods.
Subcutaneous administration should be in the upper arms, thighs, buttocks, or abdomen. Use of injection sites should be rotated so that the same site is not used more than approximately once a month.
When administered subcutaneously care should be taken when injecting Insulin lispro (Humalog) to ensure that a blood vessel has not been entered. After injection, the site of injection should not be massaged. Patients must be educated to use the proper injection techniques.
Insulin lispro (Humalog) takes effect rapidly and has a shorter duration of activity (2 to 5 hours) given subcutaneously as compared with regular insulin. This rapid onset of activity allows Insulin lispro (Humalog) injection (or, in the case of administration by continuous subcutaneous infusion, an Insulin lispro [Humalog] bolus) to be given very close to mealtime. The time course of action of any insulin may vary considerably in different individuals or at different times in the same individual. The faster onset of action compared to soluble human insulin is maintained regardless of injection site. As with all insulin preparations, the duration of action of Insulin lispro (Humalog) is dependent on dose, site of injection, blood supply, temperature, and physical activity.
Insulin lispro (Humalog) can be used in conjunction with a longer-acting human insulin or oral sulphonylurea agents, on the advice of a physician.
Vial: Use of Humalog in an insulin infusion pump: Only certain CE-marked insulin infusion pumps may be used to infuse insulin lispro. Before infusing insulin lispro, the manufacturers instructions should be studied to ascertain the suitability or otherwise for the particular pump. Read and follow the instructions that accompany the infusion pump. Use the correct reservoir and catheter for the pump. Change the infusion set every 48 hours. Use aseptic technique when inserting the infusion set. In the event of a hypoglycaemic episode, the infusion should be stopped until the episode is resolved. If repeated or severe low blood glucose levels occur, notify your health care professional and consider the need to reduce or stop your insulin infusion. A pump malfunction or obstruction of the infusion set can result in a rapid rise in glucose levels. If an interruption to insulin flow is suspected, follow the instructions in the product literature and if appropriate, notify your health care professional. When used with an insulin infusion pump, Humalog should not be mixed with any other insulin.
Intravenous administration of insulin: Intravenous injection of insulin lispro should be carried out following normal clinical practise for intravenous injections, for example by an intravenous bolus or by an infusion system. Frequent monitoring of the blood glucose levels is required. Infusion systems at concentrations from 0.1U/ml to 1.0U/ml insulin lispro in 0.9% sodium chloride or 5% dextrose are stable at room temperature for 48 hours. It is recommended that the system is primed before starting the infusion to the patient.