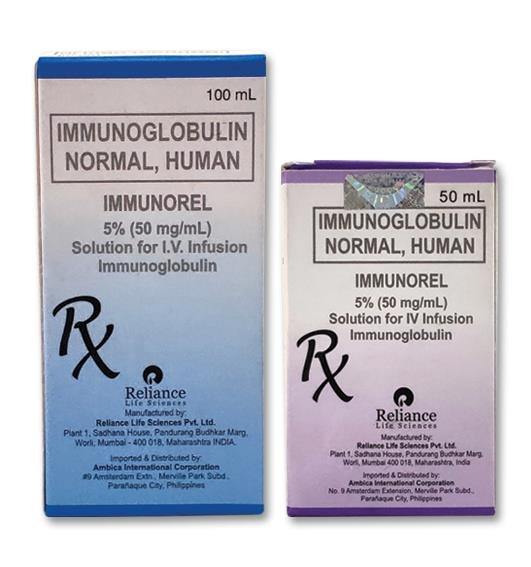 NEW Brand Resources
Concise Prescribing Info Full Prescribing Info Contents Description Action Indications/Uses Dosage/Direction for Use Contraindications Special Precautions Use In Pregnancy & Lactation Adverse Reactions Caution For Usage Storage MIMS Class ATC Classification Regulatory Classification Presentation/Packing Brand Resources
Full Prescribing Info
Contents
Normal human immunoglobulin (Ig).
Description
Immunoglobulin Normal, Human (ImmunoRel) is available in 5% concentration solution in 50 mL and 100 mL preparations.
Each mL contains: Protein content 50 mg/mL, Immunoglobulin G ≥ 95%, Stabiliser Maltose 100 mg/mL, IgA content ≤ 0.08 mg/mL.
Immunoglobulin sub class: Normal distribution.
Immunoglobulin Normal, Human (ImmunoRel) is a solvent/detergent treated, sterile, preparation of chromatographically purified immunoglobulin G (IgG) derived from pooled human plasma. The product is manufactured by modified Cohn's fractionation process followed by ultra-filtration and ion exchange chromatography. The manufacturing process includes treatment with an organic solvent detergent mixture composed of Tri-n-butyl phosphate and TritonX-100. The manufacturing process provides a significant viral reduction as confirmed by in-vitro studies.
The manufacturing process isolates IgG without additional chemical or enzymatic modification and the Fc portion is maintained intact. This contains all the IgG antibody activities against bacterial and viral agents that are capable of opsonisation and neutralisation of microbes and toxins, which are present in the normal donor population. The IgG subclass distribution is also very similar to that in normal plasma. This product contains small amounts of IgA (≤ 80 mg/L). Maltose is used as a stabiliser in the concentration of 100g/L.
Action
Pharmacology: Pharmacodynamics: Immunoglobulin is an immuno-modulating agent that has multiple actions: Saturation of Fc receptors on macrophages; Modulation of complement activation; Suppression of idiotypic antibodies; Suppression of various inflammatory mediators, including cytokines, chemokines, and metalloproteinases. The Fc region of IgG facilitates interaction with and signaling through Fc receptors on phagocytes, B cells, and other cells and with Fc-binding plasma proteins (e.g., components of the complement system). Blockade of macrophage Fc receptors is considered the primary mechanism of action of immune globulin in persons with Idiopathic thrombocytopenic purpura (ITP) and other autoantibody mediated cytopenias. In persons with Kawasaki disease, IVIG is thought to inhibit the generation of membrane attack complexes (C5b-C9) and subsequent complement-mediated tissue damage by binding the activated components C3b and C4b, thus preventing their deposition on target surfaces. In persons with dermatomyositis, IVIG induces a decrease in plasma levels of membrane attack complex and a substantial decrease in the amounts of C3b and membrane attack complex deposited in endomysial capillaries. The high content of anti-idiotypes against autoantibodies in IVIG facilitates its ability to neutralize autoantibodies, as is shown in patients with acquired haemophilia due to autoantibodies against factor VIII. Specific effects of Immunoglobulin have been described. The results of in-vitro C3 uptake studies and the effect of IVIG on the clearance of pre-opsonized cells suggest that IVIG produces a kinetic depression of C3 uptake and modifies the process of complement fragment deposition on erythrocytes.
Immunoglobulin contains natural antibodies, accounting for some of its effects. Normal serum contains IgG, IgM, and IgA antibodies, which are referred to as natural antibodies because they are induced without deliberate immunization and are independent of antigenic exposure. They are considered key to the immuno-regulatory effects of immunoglobulin in immune-mediated disorders.
Pharmacokinetics: In normal subjects: Peak serum concentrations occur immediately after intravenous injection of immunoglobulin preparation and are dose-related. Within 24 hours, up to 30% of a dose may be removed by catabolism and distribution. Data concerning distribution suggests that IVIG distribute throughout intra-vascular (60%) and extra-vascular (40%) spaces, crosses the placenta (in increasing amounts after 30 weeks of gestation), and may be excreted into milk. The serum half-life of immunoglobulin ranges between 21 to 29 days. This will however vary from person to person and can be affected by hyper metabolic states.
In primary immunodeficiencies: This product is not advocated in patients with isolated IgA deficiencies. As per data stated in various clinical studies, the half-life of IgG (in patients suffering from primary immunodeficiency conditions) varies between 26 to 35 days as compared to 21 to 29 days in normal subjects.
In secondary immunodeficiencies: Compared with the average half-life of 22 days in normal subjects, the half-life in bone marrow transplant patients can be shorter, and will depend on the level of bacterial infections or superimposed viral and fungal infections.
In neonates: Single dose pharmacokinetic study of intravenous immunoglobulin with 500, 750 and 1000 mg/kg in neonates with birth weights ranging from 750 to 1500 g generally shows a mean elimination half-life being shorter as compared to normal subjects.
Indications/Uses
Immunoglobulin preparations are indicated in several clinical conditions. An approved list of clinical conditions where Immunoglobulin Normal, Human (ImmunoRel) is indicated, is as follows: Primary Immunodeficiency (PID), Kawasaki Syndrome, Idiopathic Thrombocytopenic Purpura, B-cell Chronic lymphocytic leukemia, Paediatric HIV 1 infection, Hemopoietic stem cell transplantation in elderly.
Dosage/Direction for Use
Treatment dosage varies according to the indication and preparation used. IVIG for a patient should be adjusted according to clinical response. The following are dosage schedule guidelines: See table.
Note: Doses and frequency must be based primarily on clinical course and response.