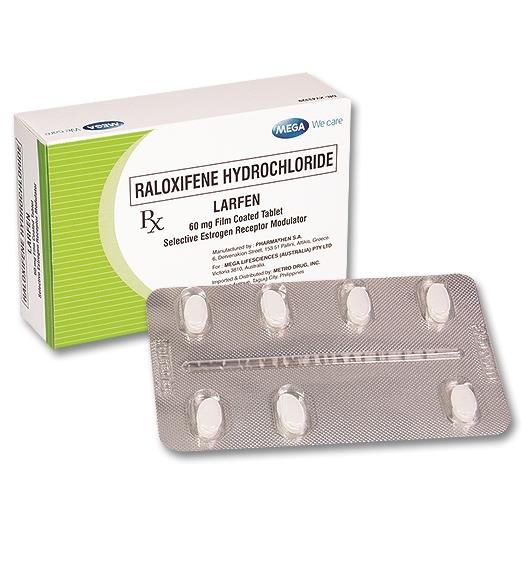 Compared with placebo-treated patients, the occurrence of vasodilatation (hot flushes) was modestly increased in raloxifene patients (clinical trials for the prevention of osteoporosis, 2 to 8 years postmenopausal, 24.3% raloxifene and 18.2% placebo; clinical trials for the treatment of osteoporosis, mean age 66, 10.6% for raloxifene and 7.1% placebo). This undesirable reaction was most common in the first 6 months of treatment, and seldom occurred de novo after that time.
In a study of 10,101 postmenopausal women with documented coronary heart disease or at increased risk for coronary events (RUTH), the occurrence of vasodilatation (hot flushes) was 7.8% in the raloxifene-treated patients and 4.7% in the placebo-treated patients.
Across all placebo-controlled clinical trials of raloxifene in osteoporosis, venous thromboembolic events, including deep vein thrombosis, pulmonary embolism, and retinal vein thrombosis, occurred at a frequency of approximately 0.8% or 3.22 cases per 1,000 patient years. A relative risk of 1.60 (CI 0.95, 2.71) was observed in raloxifene-treated patients compared to placebo. The risk of a thromboembolic event was greatest in the first four months of therapy. Superficial vein thrombophlebitis occurred in a frequency of less than 1%.
In the RUTH study, venous thromboembolic events occurred at a frequency of approximately 2.0% or 3 .88 cases per 1,000 patient-years in the raloxifene group and 1.4% or 2.70 cases per 1,000 patient-years in the placebo group. The hazard ratio for all VTE events in the RUTH study was HR=1.44, (1.06-1.95). Superficial vein thrombophlebitis occurred at a frequency of 1% in the raloxifene group and 0.6% in the placebo group.
Another undesirable reaction observed was leg cramps (5.5% for raloxifene, 1.9% for placebo in the prevention population and 9.2% for raloxifene, 6.0% for placebo in the treatment population).
In the RUTH study, leg cramps were observed in 12.1% of raloxifene-treated patients and 8.3% of placebo-treated patients.
Flu syndrome was reported by 16.2% of raloxifene-treated patients and 14.0% of placebo­ treated patients.
One further change was seen which was not statistically significant (p>0.05), but which did show a significant dose trend. This was peripheral oedema, which occurred in the prevention population at an incidence of 3.1% for raloxifene and 1.9% for placebo; and in the treatment population occurred at an incidence of 7.1% for raloxifene and 6.1% for placebo.
In the RUTH study, peripheral oedema occurred in 14.1% of the raloxifene-treated patients and 11.7% of the placebo-treated patients, which was statistically significant.
Slightly decreased (6-10%) platelet counts have been reported during raloxifene treatment in placebo-controlled clinical trials of raloxifene in osteoporosis.
Rare cases of moderate increases in AST and/or ALT have been reported where a causal relationship to raloxifene cannot be excluded. A similar frequency of increases was noted among placebo patients. In a study (RUTH) of postmenopausal women with documented coronary heart disease or at increased risk for coronary events, an additional adverse reaction of cholelithiasis occurred in 3.3% of patients treated with raloxifene and 2.6% of patients treated with placebo. Cholecystectomy rates for raloxifene (2.3%) were not statistically significantly different from placebo (2.0%).
Raloxifene (n=317) was compared with continuous combined (n=110) hormone replacement therapy (HAT) or cyclic (n=205) HAT patients in some clinical trials. The incidence of breast symptoms and uterine bleeding in raloxifene treated women was significantly lower than in women treated with either form of HRT.
View ADR Monitoring Form
Drug Interactions
Concurrent administration of either calcium carbonate or aluminium and magnesium­ hydroxide containing antacids do not affect the systemic exposure of raloxifene. Co-administration of raloxifene and warfarin does not alter the pharmacokinetics of either compound. However, modest decreases in the prothrombin time have been observed, and if raloxifene is given concurrently with warfarin or other coumarin derivatives the prothrombin time should be monitored. Effects on prothrombin time may develop over several weeks if raloxifene treatment is started in patients who are already on coumarin anticoagulant therapy.
Raloxifene has no effect on the pharmacokinetics of methylprednisolone given as a single dose. Raloxifene does not affect the steady-state AUC of digoxin. The Cmax of digoxin increased by less than 5%.
The influence of concomitant medication on raloxifene plasma concentrations was evaluated in the prevention and treatment trials. Frequently co-administered medicinal products included: paracetamol, non-steroidal anti-inflammatory drugs (such as acetylsalicylic acid, ibuprofen, and naproxen), oral antibiotics, H1-antagonists, H2-antagonists, and benzodiazepines. No clinically relevant effects of the co-administration of the agents on raloxifene plasma concentrations were identified.
Concomitant use of vaginal oestrogen preparations was allowed in the clinical trial programme, if necessary to treat atrophic vaginal symptoms. Compared to placebo there was no increased use in raloxifene-treated patients.
In vitro, raloxifene did not interact with the binding of warfarin, phenytoin, or tamoxifen.
Raloxifene should not be co-administered with cholestyramine (or other anion exchange resins), which significantly reduces the absorption and enterohepatic cycling of raloxifene.
Peak concentrations of raloxifene are reduced with co-administration with ampicillin. However, since the overall extent of absorption and the elimination rate of raloxifene are not affected, raloxifene can be concurrently administered with ampicillin.
Raloxifene modestly increases hormone-binding globulin concentrations, including sex steroid binding globulins (SHBG), thyroxine binding globulin (TBG), and corticosteroid binding globulin (CBG), with corresponding increases in total hormone concentrations. These changes do not affect concentrations of free hormones.
Storage
Store at temperatures not exceeding 30°C, away from direct sunlight.
MIMS Class
Agents Affecting Bone Metabolism
ATC Classification
G03XC01 - raloxifene ; Belongs to the class of selective estrogen receptor modulators.