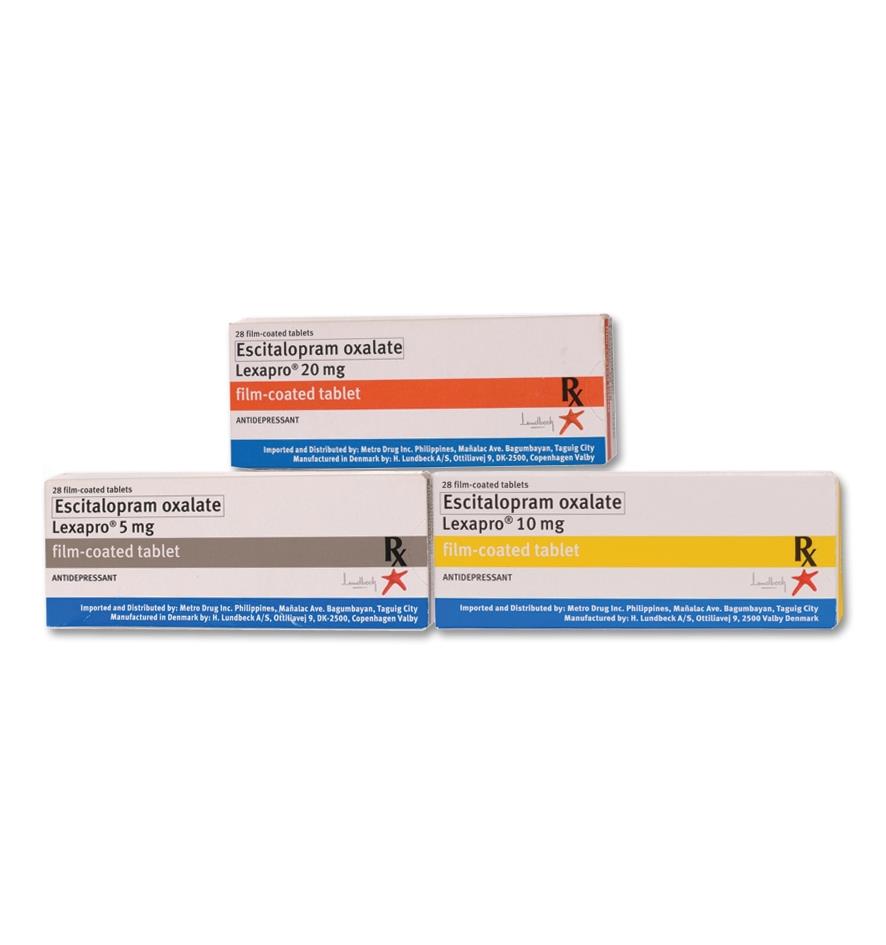 Concise Prescribing Info Full Prescribing Info Contents Action Indications/Uses Dosage/Direction for Use Overdosage Contraindications Special Precautions Use In Pregnancy & Lactation Adverse Reactions Drug Interactions Storage MIMS Class ATC Classification Regulatory Classification Presentation/Packing
Full Prescribing Info
Action
Pharmacology: Mechanism of Action: Escitalopram is a selective inhibitor of serotonin (5-HT) re-uptake. The inhibition of 5-HT re-uptake is the only likely mechanism of action explaining the pharmacological and clinical effects of escitalopram. Escitalopram has no or low affinity for a number of receptors including 5-HT1A, 5-HT2, DA D1 and D2 receptors, α1-, α2-, β-adrenoceptors, histamine H1, muscarine cholinergic, benzodiazepine and opioid receptors.
Pharmacokinetics: Absorption: Absorption is almost complete and independent of food intake (mean Tmax is 4 hrs after multiple dosing). As with racemic citalopram, the absolute bioavailability of escitalopram is expected to be about 80%.
Distribution: The apparent volume of distribution (Vd,b/F) after oral administration is about 12-26 L/kg. The plasma protein-binding is <80% for escitalopram and its main metabolites.
Biotransformation: Escitalopram is metabolized in the liver to the demethylated and didemethylated metabolites. Both of these are pharmacologically active. Alternatively, the nitrogen may be oxidized to form the N-oxide metabolite. Both parent and metabolites are partly excreted as glucuronides. After multiple dosing, the mean concentrations of the demethyl and didemethyl metabolites are usually 28-31% and <5%, respectively, of the escitalopram concentration. Biotransformation of escitalopram to the demethylated metabolite is mediated primarily by CYP2C19. Some contribution by the enzymes CYP3A4 and CYP2D6 is possible.
Elimination: The elimination half-life (t½ β) after multiple dosing is about 30 hrs and the oral plasma clearance (Cloral) is about 0.6 L/min. The major metabolites have a significantly longer t½. Escitalopram and major metabolites are assumed to be eliminated by both the hepatic (metabolic) and renal routes, with the major part of the dose excreted as metabolites in the urine.
There is linear pharmacokinetics. Steady-state plasma levels are achieved in about 1 week. Average steady-state concentrations of 50 nmol/L (range 20-125 nmol/L) are achieved at a daily dose of 10 mg.
Elderly Patients (>65 years): Escitalopram appears to be eliminated more slowly in elderly patients compared to younger patients. Systemic exposure (AUC) is about 50% higher in elderly compared to young healthy volunteers.
Reduced Renal Function: In patients with mild to moderate hepatic impairment (Child-Pugh Criteria A and B), the t½ of escitalopram was about twice as long and the exposure was about 60% higher than in subjects with normal liver function.
Polymorphism: It has been observed that poor metabolizers with respect to CYP2C19 have twice as high a plasma concentration of escitalopram as extensive metabolizers. No significant change in exposure was observed in poor metabolizers with respect to CYP2D6.
Toxicology: Preclinical Safety Data: No complete conventional battery of preclinical studies was performed with escitalopram since the bridging toxicokinetic and toxicological studies conducted in rats with escitalopram and citalopram showed a similar profile. Therefore, all the citalopram information can be extrapolated to escitalopram.
In comparative toxicological studies in rats, escitalopram and citalopram caused cardiac toxicity including CHF after treatment for some weeks, when using dosages that caused general toxicity. Peak plasma concentrations at no-effect level were in excess (8-fold) of those achieved in clinical use, while AUC for escitalopram was only 3- to 4-fold higher than the exposure achieved in clinical use. For citalopram, AUC values for the S-enantiomer were 6- to 7-fold higher than exposure achieved in clinical use. These findings are probably related to an exaggerated influence on biogenic amines ie, secondary to the primary pharmacological effects. However, the exact mechanism of cardiotoxicity is not clear. Clinical experience with citalopram and clinical trial experience with escitalopram do not indicate that these findings have a clinical implication.
Increased content of phospholipids has been observed in some tissues eg, lung, epididymides and liver after treatment for longer periods with escitalopram and citalopram in rats. Findings in the epididymides and liver were seen at exposures similar to that in man. The effect is reversible after treatment cessation. Accumulation of phospholipids (phospholipidosis) in animals has been observed in connection with many cationic amphiphilic medicines. It is not known if this phenomenon has any significant relevance for man.
In the developmental toxicity study in the rat, embryotoxic effects (reduced fetal weight and reversible delay of ossification) were observed at exposures in terms of AUC in excess of the exposure achieved during clinical use. No increased frequency of malformations was noted. Pre- and postnatal studies showed reduced survival during the lactation period at exposures in terms of AUC in excess of the exposure achieved during clinical use.