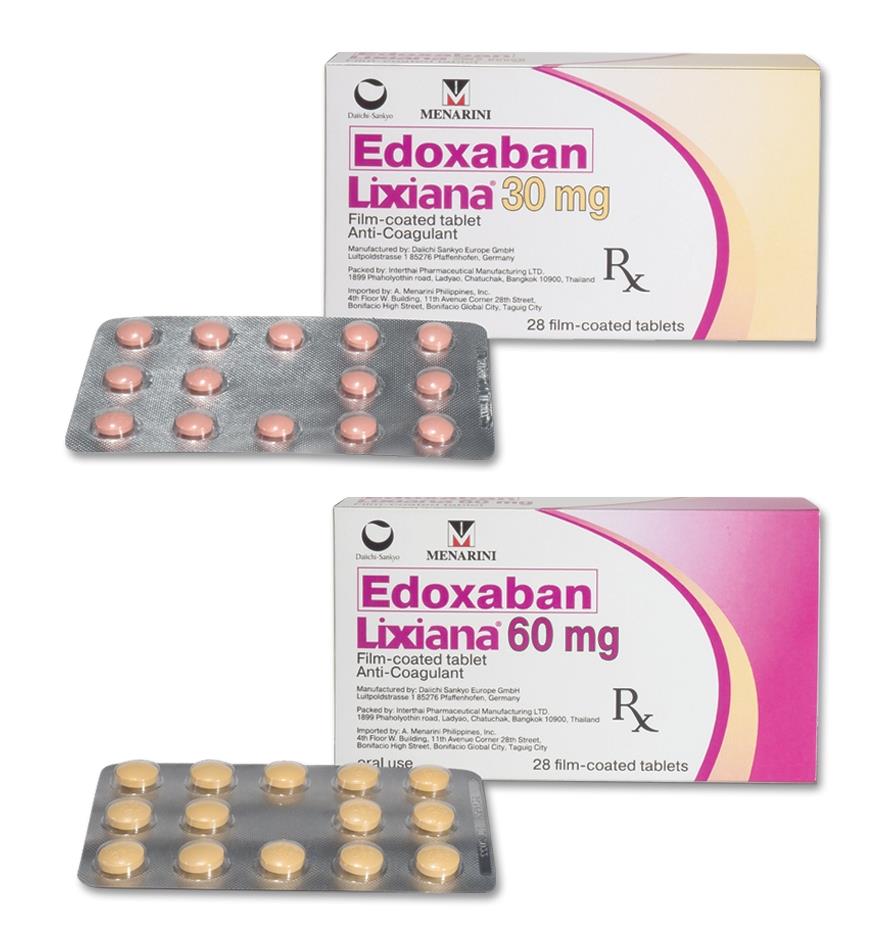 Concise Prescribing Info Full Prescribing Info Contents Description Action Indications/Uses Dosage/Direction for Use Overdosage Contraindications Special Precautions Use In Pregnancy & Lactation Adverse Reactions Drug Interactions Storage MIMS Class ATC Classification Regulatory Classification Presentation/Packing
Full Prescribing Info
Action
Pharmacotherapeutic group: Other antithrombotic agents. ATC code: B01AF03.
Pharmacology: Pharmacodynamics: Edoxaban is a highly selective, direct and reversible inhibitor of factor Xa, the serine protease located in the final common pathway of the coagulation cascade. Edoxaban inhibits free factor Xa, and prothrombinase activity. Inhibition of factor Xa in the coagulation cascade reduces thrombin generation, prolongs clotting time and reduces the risk of thrombus formation.
Edoxaban produces rapid onset of pharmacodynamic effects within 1 - 2 hours, which corresponds with peak edoxaban exposure (Cmax). The pharmacodynamic effects measured by anti-factor Xa assay are predictable and correlate with the dose and the concentration of edoxaban. As a result of FXa inhibition, edoxaban also prolongs clotting time in tests such as prothrombin time (PT), and activated partial thromboplastin time (aPTT). Changes observed in these clotting tests are expected at the therapeutic dose, however, these changes are small, subject to a high degree of variability, and not useful in monitoring the anticoagulation effect of edoxaban.
Effects of coagulation markers when switching from rivaroxaban, dabigatran, or apixaban to edoxaban.
In clinical pharmacology studies, healthy subjects received rivaroxaban 20 mg once daily, dabigatran 150 mg twice daily, or apixaban 5 mg twice daily, followed by a single dose of edoxaban 60 mg on Day 4. The effect on prothrombin time (PT) and other coagulation biomarkers (e.g. anti-FXa, aPTT) was measured. Following the switch to edoxaban on Day 4 the PT was equivalent to Day 3 of rivaroxaban and apixaban. For dabigatran higher aPTT activity was observed after edoxaban administration with prior dabigatran treatment compared to that after treatment with edoxaban alone. This is considered to be due to the carry-over effect of dabigatran treatment, however, this did not lead to a prolongation of bleeding time. Based on these data, when switching from these anticoagulants to edoxaban, the first dose of edoxaban can be initiated at the time of the next scheduled dose of the previous anticoagulant.
Pharmacokinetics: Edoxaban is absorbed with peak plasma concentrations within 1 - 2 hours. The absolute bioavailability is approximately 62%. Food increases peak exposure to a varying extent, but has minimal effect on total exposure. Edoxaban was administered with or without food in the ENGAGE AF-TIMI 48 and the Hokusai-VTE studies. Edoxaban is poorly soluble at pH of 6.0 or higher. Co-administration of proton pump inhibitors had no relevant impact on edoxaban exposure Disposition is biphasic. The volume of distribution is 107 (19.9) L mean (SD). In vitro plasma protein binding is approximately 55%. There is no clinically relevant accumulation of edoxaban (accumulation ratio 1.14) with once daily dosing. Steady state concentrations are achieved within 3 days.
Unchanged edoxaban is the predominant form in plasma. Edoxaban is metabolised via hydrolysis (mediated by carboxylesterase 1), conjugation or oxidation by CYP3A4/5 (<10%). Edoxaban has three active metabolites, the predominant metabolite (M-4), formed by hydrolysis, is active and reaches less than 10% of the exposure of the parent compound in healthy subjects. Exposure to the other metabolites is less than 5%. Edoxaban is a substrate for the efflux transporter P-glycoprotein (Pgp), but not a substrate for uptake transporters such as organic anion transporter polypeptide OATP1B1, organic anion transporters OAT1 or OAT3 or organic cation transporter OCT2. Its active metabolite is a substrate for OATP1B1.
In healthy subjects, the total clearance is estimated as 22 (± 3) L/hour; 50% is renally cleared (11 L/hour). Renal clearance accounts for approximately 35% of the administered dose. Metabolism and biliary/intestinal excretion account for the remaining clearance. The t½ for oral administration is 10 - 14 hours. Edoxaban displays approximately dose-proportional pharmacokinetics for doses of 15 mg to 60 mg in healthy subjects.
Toxicology: Preclinical safety data: Non-clinical data reveal no special hazard for humans based on conventional studies of safety pharmacology, repeated dose toxicity, genotoxicity, carcinogenic potential, or phototoxicity.