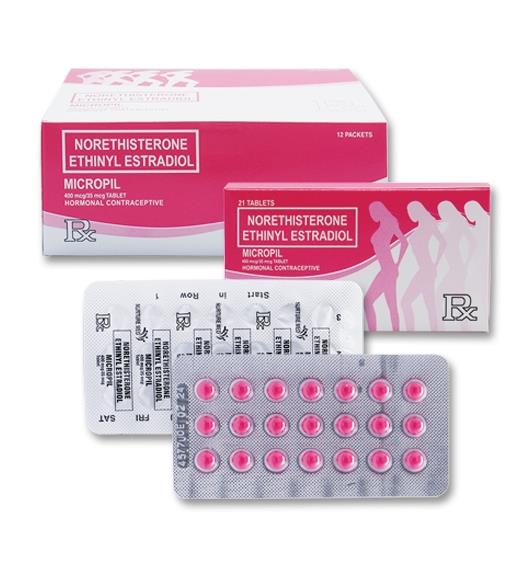 Concise Prescribing Info Full Prescribing Info Contents Description Action Indications/Uses Dosage/Direction for Use Contraindications Special Precautions Use In Pregnancy & Lactation Side Effects Drug Interactions Storage MIMS Class ATC Classification Regulatory Classification Presentation/Packing
Full Prescribing Info
Action
Micropil is an oral contraceptive containing progestogen (norethisterone) capable of fully inhibiting ovulation. It is combined with estrogen (ethinyl estradiol), capable of controlling menstrual irregularity and has an additive effect on progestogen in suppressing ovulation and fertility.
Pharmacology: Micropil produces a contraceptive effect primarily by suppressing the hypothalamic-pituitary system resulting in the prevention of ovulation. The estrogen component, ethinyl estradiol, acts by suppressing the secretion of follicle-stimulating hormone (FSH), resulting in the prevention of follicular development and the rise of plasma estradiol which is thought to be the stimulus for releasing luteinizing hormone (LH). The progestogen component, norethisterone, primarily acts by inhibiting the preovulatory rise of LH. Long-term administration of combined pills results in inhibition of both FSH and LH secretions. It has been found that combination type of oral contraceptives may also produce a direct effect on ovarian steroidogenesis or the response of the ovary to gonadotropins. Although the primary mechanism of action is inhibition of ovulation, alterations in the genital tract including changes in the cervical mucus (which increase the difficulty of sperm penetration) and development of poor endometrial lining (which reduces the likelihood of implantation) may also contribute to contraceptive effectiveness.
Pharmacokinetics: Studies have shown that both norethisterone and ethinyl estradiol are rapidly absorbed from the gastrointestinal tract. Following oral administration, metabolites of both compounds appear in the urine as conjugated glucuronides and sulfates.
Toxicology: The use of contraceptives may be associated with increased risk of several serious conditions including thromboembolism, stroke, myocardial infarction, hepatic adenoma, gallbladder disease and hypertension.