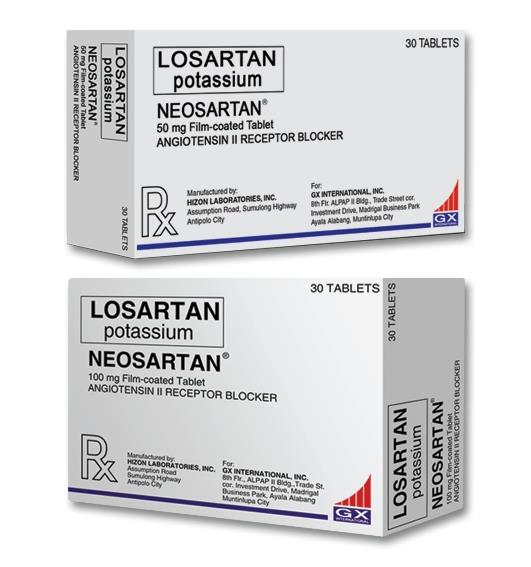 Concise Prescribing Info Full Prescribing Info Contents Description Action Indications/Uses Dosage/Direction for Use Overdosage Contraindications Warnings Special Precautions Use In Pregnancy & Lactation Adverse Reactions Drug Interactions Storage MIMS Class ATC Classification Regulatory Classification Presentation/Packing
Full Prescribing Info
Action
Pharmacology: Pharmacokinetics: Losartan potassium is an angiotensin II receptor antagonist with antihypertensive activity due mainly to selective blockage of AT1, receptors and the consequent reduced pressure effect on angiotensin II.
Losartan potassium is readily absorbed from the gastrointestinal tract following oral administration, with an oral bioavailability of about 33%. It undergoes first-pass metabolism to form an active carboxylic acid metabolite E-3174 (EXP-3174), which has greater pharmacological activity than Losartan and some inactive metabolites. Metabolism is primarily by cytochrome P450 isoenzyme CYP2C9 and CYP3A4. Peak plasma concentrations of Losartan and E-3174 occur about 1 hour and 3 to 4 hours respectively, after an oral dose. Both Losartan and E-3174 are more than 98% bound to plasma proteins. Losartan is excreted in the urine and in the feces via bile, as unchanged drug and metabolites. Following oral dosing, about 35% of the dose is excreted in the urine, and about 60% in the feces. The terminal elimination half-lives of Losartan and E-3174 are about 1.5 to 2.5 hours and 3 to 9 hours respectively.