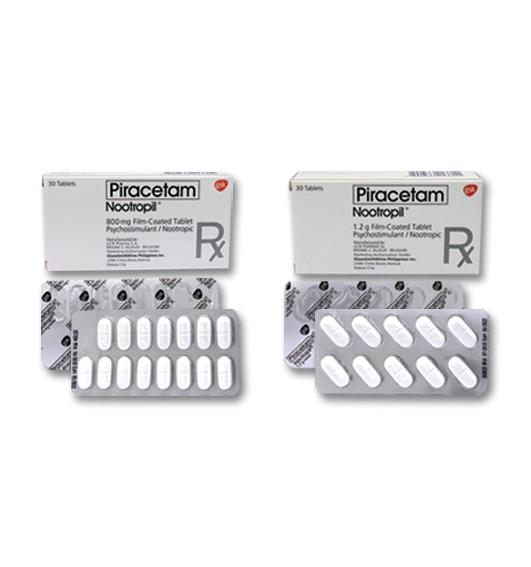 Hepatic Impairment: No dose adjustment is needed in patients with solely hepatic impairment. In patients with hepatic and renal impairment, adjustment dose is recommended (see Table 1).
Administration: Oral Formulations: Piracetam (Nootropil) may be taken with or without food. The film-coated tablet should be swallowed with liquid.
Route of Administration: Oral Formulations: For oral use.
Overdosage
Symptoms: No additional adverse events specifically related to overdose have been reported with piracetam (Nootropil). The highest reported overdose with piracetam (Nootropil) was oral intake of 75 g wherein bloody diarrhoea with abdominal pain, was most probably related to the extreme high dose of sorbitol contained in the used formulation.
Treatment: There is no specific antidote for overdose with piracetam (Nootropil). Treatment for an overdose should be symptomatic and may include haemodialysis. The extraction efficiency of the dialyser is 50 to 60% for piracetam (Nootropil). Further management should be as clinically indicated or as recommended by the national poisons centre, where available.
Contraindications
Piracetam (Nootropil) is contraindicated in: Hypersensitivity to piracetam, other pyrrolidone derivatives or any of the excipients, severe renal impairment (renal creatinine clearance of less than 20 mL per minute), cerebral haemorrhage, patients suffering from Huntington's Chorea.
Special Precautions
Effects on platelet aggregation: Due to the effect of piracetam (Nootropil) on platelet aggregation, caution is recommended in patients with severe haemorrhage, patients at risk of bleeding such as gastrointestinal ulcer, patients with underlying disorders of haemostasis, patients with history of haemorrhagic CVA, patients undergoing major surgery including dental surgery, and patients using anticoagulants or platelet antiaggregant drugs including low dose acetylsalicylic acid.
Renal insufficiency: Piracetam (Nootropil) is eliminated via the kidneys and care should thus be taken in cases of renal insufficiency (see Dosage & Administration).
Discontinuation: Abrupt discontinuation of treatment should be avoided as this may induce myoclonic or generalised seizures in some myoclonic patients.
Ability to perform tasks that require judgement, motor or cognitive skills: In view of the undesirable side effects, which were observed after the administration of the preparation, there is the possibility of influence on the ability to drive and to operate machinery and this should be taken into consideration.
Use in Elderly: For long-term treatment in the elderly, regular evaluation of the creatinine clearance is required to allow dosage adaptation if needed (see Dosage & Administration).
Use In Pregnancy & Lactation
Fertility: There are no relevant data available.
Pregnancy: Piracetam (Nootropil) should not be used during pregnancy unless clearly necessary, when benefit exceeds the risks and the clinical condition of the pregnant mother requires treatment with piracetam (Nootropil). Piracetam (Nootropil) crosses the placental barrier. Drug levels in the newborn are approximately 70% to 90% of maternal levels. There are no adequate data from the use of piracetam (Nootropil) in pregnant women. Animal studies do not indicate direct or indirect harmful effects with respect to pregnancy, embryonal/foetal development, parturition or post-natal development.
Lactation: Piracetam (Nootropil) should not be used during breastfeeding or breastfeeding should be discontinued, while receiving treatment with piracetam (Nootropil). Piracetam (Nootropil) is excreted in human breast milk. A decision must be made whether to discontinue breast-feeding or to discontinue piracetam (Nootropil) therapy taking into account the benefit of breastfeeding for the child and the benefit of therapy for the woman.
Adverse Reactions
Clinical Trial and Post Marketing Data: Double-blind placebo-controlled clinical or pharmaco-clinical trials, of which quantified safety data are available, included more than 3000 subjects receiving Piracetam (Nootropil), regardless of indication, dosage form, daily dosage or population characteristics. Adverse drug reactions (ADRs) are listed below by MedDRA system organ class and by frequency.
Frequencies are defined as: Very common ≥1/10, Common ≥1/100 to <1/10, Uncommon ≥1/1000 to <1/100, Rare ≥1/10000 to <1/1000, Very rare <1/10000, Not known (cannot be estimated from the available data) (see Table 2).