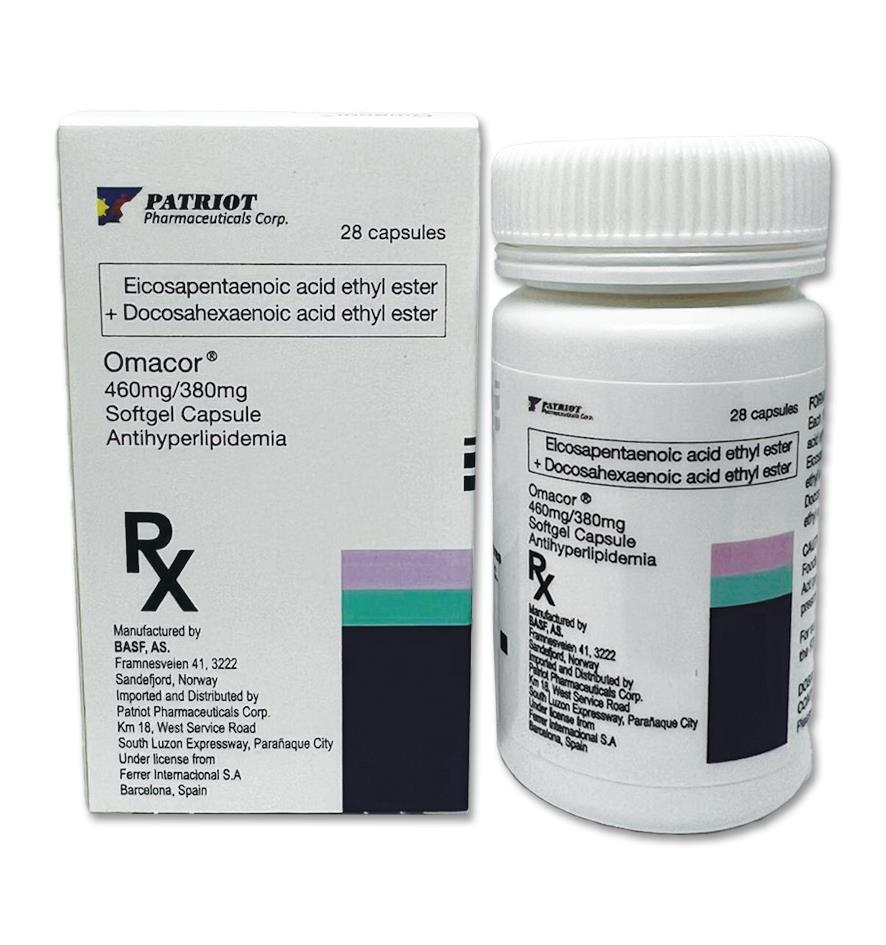 In Table 2 hereafter the results of the four-way analysis are presented for the main endpoints and selected secondary endpoints. Results of the log-rank test as well as the relative risk together with the 95% confidence interval are presented for only the Omacor group and the control group.
For this four-way analysis a 15% relative decrease in risk and a 2.3% absolute decrease in risk are observed for the combined endpoint of death, non-fatal Ml and nonfatal stroke (Number Needed to Treat NNT=43). The log-rank test was significant with a p-value of 0.023.
The relative and absolute risk decreases for the second combined endpoint cardiovascular death, nonfatal MI and nonfatal stroke were respectively 20% and 1.2% (Number Needed to Treat NNT=83). The log-rank test result was highly significant with a p-value of 0.008. Analysis of the individual components of the main endpoint showed significant differences between the two treatment groups for total mortality (p=0.009), cardiovascular death (p=0,001), coronary death (p=0.001) and sudden death (p=0.0004). There was no difference across the treatment groups for non-fatal cardiovascular events (relative risk of 0.96 and 95% CI of 0.76-1.21) and other deaths with a relative risk of 0.99 and 95% CI of 0.75-1.30. (See Table 2).

Referring to the Lancet publication of the GISSI-Prevenzione study (1999), the first primary combined endpoint (death, non-fatal MI and non-fatal stroke) reached statistical significance for the overall efficacy of Omacor plus vitamin E.
For the second primary combined endpoint (cardiovascular death, non-fatal MI and non-fatal stroke), neither the two-way analysis for the Omacor effect (Table 3 in the publication) nor the overall efficacy profile of Omacor plus vitamin E treatment (Table 5 in the publication) reached statistical significance, even so the risk reduction trend is clear.
The risk reductions for the Omacor treatment group were 20% in the four-way analysis (statistically significant) and 11% in the two-way analysis (non-significant), accordingly. For the combined Omacor plus vitamin E treatment group, the analysis showed a risk reduction of 12%, thus demonstrating a small additional risk reduction of the combined treatment compared to the two-way analysis of the n-3 PUFA group (see the graph below).
In the analysis of this latter overall efficacy profile, the investigators compared the large Omacor group (5666 patients), including those taking a combination of Omacor and vitamin E, to the small "clean" control group of 2828 patients, resulting in a broader confidence interval than two-way analysis where the control group also included the vitamin E-group (N=5658). (See figure).

At the end of the study 28.5% of the patients receiving Omacor and 262% of the patients receiving vitamin E has discontinued treatment thirteen patients were lost to follow-up.
The investigators also assessed the time course of the benefit of Omacor. Patients allocated to Omacor had a significantly lower mortality even after 3 months of treatment (1.1% versus 1.6%, relative risk [RR] 0.59, confidence interval [Cl] 0.36 to 0.97; p.,0.037). The reduction in sudden cardiac death was almost significant at only 3 months, accounting for up to 57% of the overall mortality benefit (0.5% versus 0.7%; RR 0.44; P=0.048). The benefit on sudden cardiac death became significant at 4 months (2.0% versus 2.7%; RR 0.55, 95% CI 0.39 to 0.77; p=0.0006).
Hypertriglyceridaemia: There have been eight double-blind, parallel group, placebo-controlled studies in hypertriglyceridaemia, using Omacor 4 g per day. These eight studies are the pivotal studies. These studies included seven individual studies and one part of a study that evaluated Omacor 2 g, 4 g, 8 g, and placebo treatment arms.
The duration of the eight pivotal studies was short term (maximum 12 weeks). Numerous studies in patients with hypertriglyceridaemia have been conducted with Omacor, with variable designs: double-blind studies, placebo-controlled studies, randomized studies, open studies and long term studies (up to 24 months). Omacor at doses of 4 g per day consistently and significantly reduced triglycerides levels compared to placebo. The studies have shown that the reductions were maintained for up 24 months after treatment. (See Table 3).

The following table summarizes the median percent changes in lipid parameters from baseline in the overall population, and in patients with Types IIb, IV and V dyslipidaemia. (See Table 4).

Remarks: The documented number of patients enrolled in clinical trials with Type 1 dyslipidaemia is very limited and no studies were designed to especially investigate the effect of Omacor in these patients. Type HI dyslipidaemic patients are homozygotes for ApoE, and genotyping of patients was only performed in one study (K85-95011). More Type III dyslipidemic patients may have been therefore enrolled in clinical studies without being verified as such.
There is no reason to believe that Type HI dyslipidaemic patients do not respond to Omacor.
One of the pivotal clinical trials in patients with type IV and V (K85-95009 study) demonstrated a mean LDL-C increase of 42.6% with Omacor 4 g day. 67% of the patients in the study experienced increases in LDL-C, and the increases observed were in the range of 6%-110%. However, mean LDL-C concentrations at the end of the study were still only equal to 2.69 mmol/L (104 mg/dL). For the majority of these patients (40 of 42 with no history of coronary disease) this is still below their target LDL-C levels. Only equal to 2.69 mmol/L (104 mg/dL).
In clinical trials on patients with Type Hb dyslipidaemia mean LDL-C is unchanged or slightly increased (maximum 8.6%) with Omacor treatment. In studies with concomitant treatment of Omacor and a statin no significant increase in LDL-C has been observed with Omacor.
The cholesterol enrichment of LDL particles appears to happen in conjunction with a marked reduction in VLDL-C.
Studies also demonstrate a shift from small, dense LDL particles to larger, more buoyant LDL particles, indicating a shift towards less atherogenic lipoprotein particles.
Consistent with the overall population (see Table 5 hereafter), subjects in each baseline triglycerides level category in the Omacor 4 g treatment group had significantly larger mean absolute and relative changes in triglycerides levels compared with those in the placebo treatment group.
For the subjects who received Omacor 4 g per day, those with higher baseline levels (TG 500-749 mg/dL and 3750 mg/dL [5.65-8.46 mmol/L, and 8.47 mmol/L]) had greater reductions in triglycerides levels, and therefore were more likely to exhibit a better response to Omacor. (See Table 5).