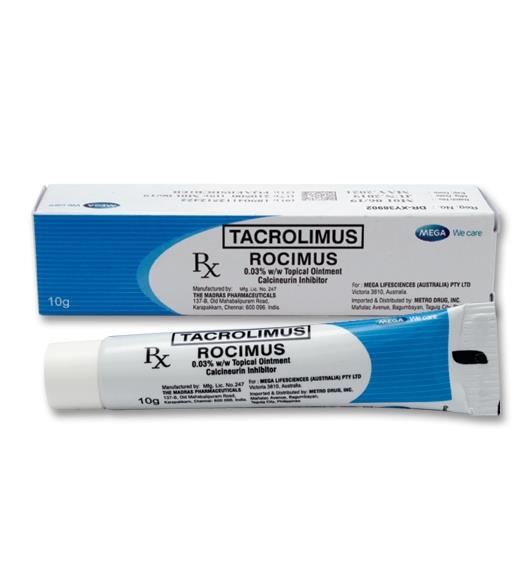 Concise Prescribing Info Full Prescribing Info Contents Description Action Indications/Uses Dosage/Direction for Use Overdosage Contraindications Special Precautions Use In Pregnancy & Lactation Adverse Reactions Drug Interactions Storage MIMS Class ATC Classification Regulatory Classification Presentation/Packing
Full Prescribing Info
Action
Pharmacology: Mechanism of Action: The mechanism of action of tacrolimus in atopic dermatitis is not known. It has been demonstrated that tacrolimus inhibits T-lymphocyte activation by first binding to an intracellular protein, FKBP-12. A complex of tacrolimus-FKBP-12, calcium, calmodulin and calcineurin is then formed and the phosphatase activity of calcineurin is inhibited. This effect has been shown to prevent the dephosphorylation and translocation of nuclear factor of activated T-cells (NF-AT), a nuclear component thought to initiate gene transcription for the formation of lymphokines (eg, interleukin-2, γ-interferon). Tacrolimus also inhibits the transcription for genes which encode IL-3, IL-4, GM-CSF and TNF-α, all of which are involved in the early stages of T-cell activation. Additionally, tacrolimus has been shown to inhibit the release of pre-formed mediators from skin mast cells and basophils.
Pharmacokinetics: When applied to intact human skin, in vitro studies have demonstrated that tacrolimus is not readily absorbed. However, on inflamed or damaged skin, it is absorbed in sufficient amounts to be topically active. The drug is metabolized in the liver by cytochrome P-450 3A4 and is eliminated almost completely in the bile.
Clinical data have shown that tacrolimus concentrations in clinical circulation after topical administration are low and when measurable, transient.
Tacrolimus does not accumulate in tissues following repeated topical application.
After systemic administration of tacrolimus, bile represents the principal pathway of elimination with a total body clearance of 2.25 L/hr and a systemic elimination half-life (t½) of approximately 40 hrs. Cytochrome P-450 3A4 isoenzyme is responsible for the metabolism of tacrolimus. In vitro, 8 metabolites have been characterized, so far, 13-O-demethylated metabolite has been shown to dominate in vitro. However, it reveals a limit pharmacological activity of 6.4% compared with tacrolimus. In vitro studies on viable human skin report no evident cutaneous metabolism of tacrolimus.
Formal topical drug interaction studies with tacrolimus have not been conducted.
Tacrolimus is not metabolized in human skin, indicating that there is no potential for percutaneous interactions that could affect the metabolism of tacrolimus.