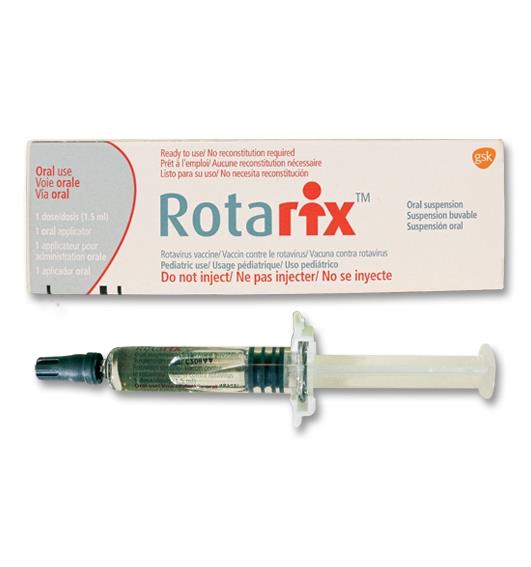 Concise Prescribing Info Full Prescribing Info Contents Description Action Indications/Uses Dosage/Direction for Use Overdosage Contraindications Special Precautions Use In Pregnancy & Lactation Adverse Reactions Drug Interactions Caution For Usage Storage MIMS Class ATC Classification Regulatory Classification Presentation/Packing
The information highlighted (if any) are the most recent updates for this brand.
Full Prescribing Info
Contents
Live attenuated rotavirus vaccine.
Description
1 dose (1.5 ml) contains: Live attenuated human rotavirus RIX4414 strain not less than 106.0 CCID50.
Excipients/Inactive Ingredients: Sucrose, di-sodium adipate, Dulbecco's Modified Eagle Medium (DMEM), sterile water.
Porcine Circovirus type 1 (PCV-1) material has been detected in Rotarix vaccine. PCV-1 is not known to cause disease in animals and is not known to infect or cause disease in humans. There is no evidence that the presence of PCV-1 poses a safety risk.
Action
Pharmacotherapeutic group: viral vaccines. ATC code: J07BH01.
Pharmacology: Pharmacodynamics: Protective efficacy: In clinical trials, efficacy was demonstrated against gastro-enteritis due to rotavirus of the most common genotypes G1P[8], G2P[4], G3P[8], G4P[8] and G9P[8] and against uncommon rotavirus genotypes G8P[4] (severe gastro-enteritis) and G12P[6] (any gastroenteritis). All of these strains are circulating worldwide.
The protective efficacy of Rotarix lyophilised formulation against any and severe rotavirus gastro-enteritis was evaluated in Europe, Latin America, Africa and Asia.
Severity of gastro-enteritis was defined according to two different criteria: the Vesikari 20-point scale, which evaluates the full clinical picture of rotavirus gastro-enteritis by taking into account the severity and duration of diarrhoea and vomiting, the severity of fever and dehydration as well as the need for treatment or; the clinical case definition based on World Health Organization (WHO) criteria.
Protective efficacy in Europe and Latin America: After two doses of Rotarix, the protective vaccine efficacy observed in the studies conducted in Europe and Latin America during the first and second year of life combined is presented in Table 1 and Table 2. (See Tables 1 and 2.)

Sustained efficacy up to 3 years of age in Asia: A clinical study conducted in Asia (Hong Kong, Singapore and Taiwan) in more than 10,000 subjects evaluated Rotarix given according to different schedules (2, 4 months of age; 3, 4 months of age).
After two doses of Rotarix, the protective vaccine efficacy observed up to 3 years of age is presented in table 4. (See Table 4.)

Safety in preterm infants: In a clinical study, 1,009 preterm infants were administered Rotarix lyophilised formulation or placebo (198 were 27-30 weeks gestational age and 801 were 31-36 weeks gestational age). The first dose was administered from 6 weeks after birth. Serious adverse events were observed in 5.1% of recipients of Rotarix as compared to 6.8% of placebo recipients. Similar rates of other adverse events were observed in Rotarix and placebo recipients. No cases of intussusception were reported.
Post-marketing data: Gastrointestinal disorders: Rare: haematochezia, gastroenteritis with vaccine viral shedding in infants with Severe Combined Immunodeficiency (SCID) disorder.
Very rare: intussusception (see Precautions).
View ADR Monitoring Form
Drug Interactions
Rotarix can be given concomitantly with any of the following monovalent or combination vaccines [including hexavalent vaccines (DTPa-HBV-IPV/Hib)]: diphtheria-tetanus-whole cell pertussis vaccine (DTPw), diphtheria-tetanus-acellular pertussis vaccine (DTPa), Haemophilus influenzae type b vaccine (Hib), inactivated polio vaccine (IPV), hepatitis B vaccine (HBV), pneumococcal conjugate vaccine and meningococcal serogroup C conjugate vaccine. Clinical studies demonstrated that the immune responses to and the safety profiles of the administered vaccines were unaffected.
Concomitant administration of Rotarix and oral polio vaccine (OPV) does not affect the immune response to the polio antigens. Although concomitant administration of OPV may slightly reduce the immune response to rotavirus vaccine, clinical protection against severe rotavirus gastro-enteritis was shown to be maintained.
Caution For Usage
Instructions for Use/Handling: The vaccine is presented as a clear, colourless liquid, free of visible particles, for oral administration.
The vaccine is ready to use (no reconstitution or dilution is required).
The vaccine is to be administered orally without mixing with any other vaccines or solutions.
The vaccine should be inspected visually for any foreign particulate matter and/or abnormal physical appearance. In the event of either being observed, discard the vaccine.
Any unused vaccine or waste material should be disposed of in accordance with local requirements.
Instructions for administration of the vaccine: 1. Remove the protective cap from the oral applicator.
2. This vaccine is for oral administration only. The child should be seated in a reclining position.
Administer orally (i.e. into the child's mouth towards the inner cheek) the entire content of the oral applicator.
3. Do not inject.
Incompatibilities: This medicinal product must not be mixed with other medicinal products.
Storage
Store in a refrigerator (2°C-8°C). Do not freeze.
Store in the original package in order to protect from light.
MIMS Class
Vaccines, Antisera & Immunologicals
ATC Classification
J07BH01 - rota virus, live attenuated ; Belongs to the class of rota virus diarrhea viral vaccines.