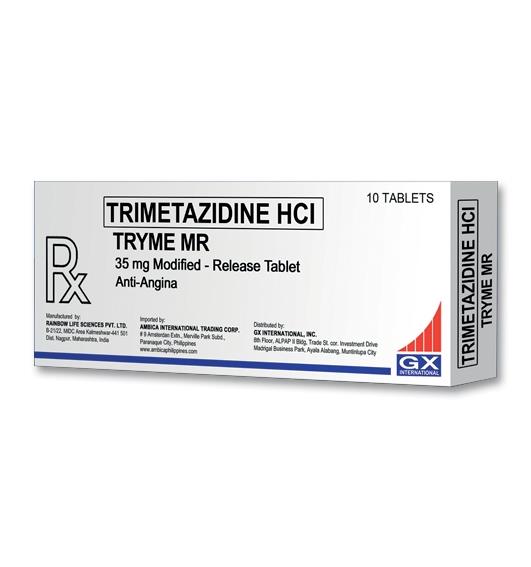 Concise Prescribing Info Full Prescribing Info Contents Description Action Indications/Uses Dosage/Direction for Use Overdosage Contraindications Special Precautions Use In Pregnancy & Lactation Adverse Reactions Drug Interactions Storage MIMS Class ATC Classification Regulatory Classification Presentation/Packing
Full Prescribing Info
Contents
Trimetazidine HCl.
Description
Each modified-release tablet contains Trimetazidine HCl, BP 35 mg.
Trimetazidine is a metabolic agent, a specific and selective inhibitor of enzymes of the fatty acid β-oxidation. The 3-ketoacyl CoA thiolase. This inhibition of β-oxidation allows a recoupling of glycolysis and an increase in glucose oxidation for better energy production under ischemic conditions.
Action
Pharmacology: Pharmacodynamics: Mechanism of action: Trimetazidine inhibits β-oxidation of fatty acids by blocking long chain 3-ketoacyl-CoA thiolase, which enhances glucose oxidation. In an ischemic cell, energy obtained during glucose oxidation requires less oxygen consumption than in the β-oxidation process. Potentiation of glucose oxidation optimizes cellular energy processes, thereby maintaining proper energy metabolism during ischaemia.
Pharmacodynamic effects: In patients with ischemic heart disease, trimetazidine acts as a metabolic agent, preserving the myocardial high-energy phosphate intracellular levels. Anti-ischemic effects are achieved without concomitant hemodynamic effects.
Clinical efficacy and safety: Clinical studies have demonstrated the efficacy and safety of trimetazidine in the treatment of patients with chronic angina, either alone or when the benefit from other antianginal medicinal products was insufficient.
Pharmacokinetics: After oral administration, maximum concentration is found on average, 5 hours after taking the tablet. Over 24 hours, the plasma concentration remains at levels >75% of the maximum concentrations for 1 hour. Steady state is reached by the 60th hour, at the latest. Trimetazidine is eliminated primarily in the urine, mainly in the unchanged form.
Indications/Uses
For long-term treatment of episodes of coronary insufficiency, angina pectoris and in ischemia neurosensorial tissue as in Meniere's disease.
Dosage/Direction for Use
One (1) tablet in the morning and one (1) in the evening during mealtime.
Overdosage
Limited information is available on Trimetazidine overdose.
Treatment should be symptomatic.
Contraindications
Hypersensitivity to any of the ingredients.
Special Precautions
This medication is not a curative treatment for angina attacks, nor initial treatment for unstable angina pectoris or myocardial infarction, nor in the pre-hospital phase or during the first days of hospitalization. In the event of an angina attack, the coronaropathy should be re-evaluated and an adaptation of the treatment considered (medicinal treatment and possibly revascularisation). Trimetazidine can cause or worsen parkinsonian symptoms (tremor, akinesia, hypertonia), which should be regularly investigate, especially in elderly patients. In doubtful cases, patients should be referred to a neurologist for appropriate investigations. The occurrence of movement disorders such as parkinsonians symptoms, restless leg syndrome, tremors, gait instability should lead to definitive withdrawal of Trimetazidine. These cases have a low prevalence and are usually reversible after treatment discontinuation. The majority of the patients recovered within 4 months after Trimetazidine withdrawal. If parkinsonian symptoms persist more than 4 months after drug discontinuation, a neurologist opinion should be sought.
Falls may occur, related to gait instability or hypotension, in particular in patients taking antihypertensive treatment. Caution should be exercised when prescribing Trimetazidine to patients in whom an increase exposure is expected: Moderate renal impairment; Elderly patients older than 75 years old.
Use In Pregnancy & Lactation
Use in Pregnancy: There are no data from the use of Trimetazidine in pregnant women. Animal studies do not indicate direct or indirect harmful effects with respect to reproductive toxicity. As a precautionary measure, it is preferable to avoid the use of Trimetazidine during pregnancy.
Use in Lactation: Trimetazidine is not recommended in lactating mothers.
Adverse Reactions
Rare cases of gastrointestinal disorders (nausea and vomiting).
View ADR Monitoring Form
Drug Interactions
Co-administration with Monoamine Oxidase Inhibitors (MAOIs), impaired renal and hepatic function.
Storage
Store at temperatures not exceeding 30°C.
MIMS Class
Anti-Anginal Drugs
ATC Classification
C01EB15 - trimetazidine ; Belongs to the class of other cardiac preparations.