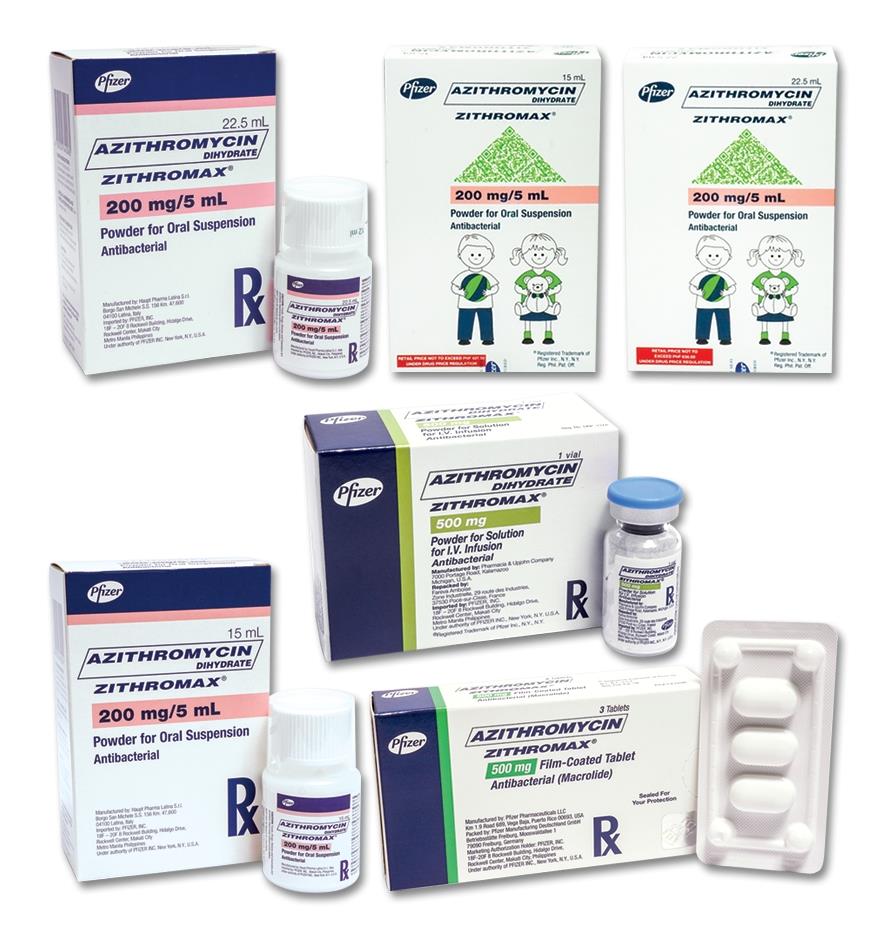 Concise Prescribing Info Full Prescribing Info Contents Description Action Indications/Uses Dosage/Direction for Use Overdosage Contraindications Special Precautions Use In Pregnancy & Lactation Adverse Reactions Drug Interactions Caution For Usage Storage MIMS Class ATC Classification Regulatory Classification Presentation/Packing
Full Prescribing Info
Contents
Azithromycin dihydrate.
Description
Powder for Oral Suspension: When reconstituted as directed, each teaspoonful (5 mL) contains azithromycin dihydrate equivalent to 200 mg of azithromycin.
Film-coated Tablet 250 mg: Each tablet contains azithromycin dihydrate equivalent to 250 mg azithromycin.
Film-coated Tablet 500 mg: Each tablet contains azithromycin dihydrate equivalent to 500 mg azithromycin.
Powder for Intravenous (IV) Solution: Each vial contains 500 mg of azithromycin as dihydrate providing 100 mg/mL solution following recommended reconstitution.
Azithromycin has the chemical name (2R,3S,4R,5R,8R,10R,11R,12S,13S,14R)-13-[(2,6-dideoxy-3-C-methyl-3-O -methyl-α−L-ribo- hexopyranosyl)-oxy]-2-ethyl-3,4,10-trihydroxy-3,5,6,8,10,12,14-hepta-methyl-11-[[3,4,6-trideoxy-3-(dimethylamino)-β-D-xylo-hexopyranosyl] oxy]-1-oxa- 6-azacyclopentadecan-15-one. Azithromycin is derived from erythromycin; however, it differs chemically from erythromycin in that a methyl-substituted nitrogen atom is incorporated into the lactone ring. Its molecular formula is C38H72N2O12, and its molecular weight is 749.00.
Azithromycin, as the dihydrate, is a white crystalline powder with a molecular formula of C38H72N2O12·2H2O and a molecular weight of 785.0.
Excipients/Inactive Ingredients: Powder for Oral Suspension: The powder for oral suspension contains sucrose (1.94 g per 100 mg dose), sodium phosphate tribasic anhydrous, hydroxypropyl cellulose, xanthan gum, artificial cherry, creme de vanilla and banana flavors.
Film-coated Tablets: The tablets contain pregelatinized starch, calcium phosphate dibasic anhydrous, croscarmellose sodium, magnesium stearate and sodium lauryl sulfate. The film coating contains hydroxypropyl methylcellulose, triacetin and titanium dioxide (E171).
Powder for Intravenous Solution: The IV formulation contains citric acid (anhydrous) 384.6 mg, and sodium hydroxide 198.3 mg.
Action
Pharmacotherapeutic group: Macrolides. ATC code: J01FA.
Pharmacology: Pharmacodynamics: Mode of action: Azithromycin is the first of a subclass of macrolide antibiotics, known as azalides, and is chemically different from erythromycin. Chemically it is derived by insertion of a nitrogen atom into the lactone ring of erythromycin A. The chemical name of azithromycin is 9-deoxy-9a-aza-9a-methyl-9a-homoerythromycin A. The molecular weight is 749.0.
Azithromycin binds to the 23S rRNA of the 50S ribosomal subunit. It blocks protein synthesis by inhibiting the transpeptidation/translocation step of protein synthesis and by inhibiting the assembly of the 50S ribosomal subunit.
Cardiac electrophysiology: QTc interval prolongation was studied in a randomized, placebo-controlled parallel trial in 116 healthy subjects who received either chloroquine (1000 mg) alone or in combination with azithromycin (500 mg, 1000 mg, and 1500 mg once daily). Co-administration of azithromycin increased the QTc interval in a dose- and concentration-dependent manner. In comparison to chloroquine alone, the maximum mean (95% upper confidence bound) increases in QTcF were 5 (10) ms, 7 (12) ms and 9 (14) ms with the co-administration of 500 mg, 1000 mg and 1500 mg azithromycin, respectively.
Mechanism of resistance: The two most frequently encountered mechanisms of resistance to macrolides, including azithromycin, are target modification (most often by methylation of 23S rRNA) and active efflux. The occurrence of these resistance mechanisms varies from species to species and, within a species, the frequency of resistance varies by geographical location. The most important ribosomal modification that determines reduced binding of macrolides is post-transcriptional (N6)-dimethylation of adenine at nucleotide A2058 (Escherichia coli numbering system) of the 23S rRNA by methylases encoded by erythromycin ribosome methylase (erm) genes. Ribosomal modifications often determine cross-resistance (MLSB phenotype) to other classes of antibiotics whose ribosomal binding sites overlap those of the macrolides: the lincosamides (including clindamycin), and the streptogramin B (which include, for example, the quinupristin component of quinupristin/dalfopristin). Different erm genes are present in different bacterial species, in particular streptococci and staphylococci. Susceptibility to macrolides can also be affected by less frequently encountered mutational changes in nucleotides A2058 and A2059, and at some other positions of 23S rRNA, or in the large subunit ribosomal proteins L4 and L22.
Efflux pumps occur in a number of species, including gram-negatives, such as Haemophilus influenzae (where they may determine intrinsically higher minimal inhibitory concentrations [MICs]) and staphylococci. In streptococci and enterococci, an efflux pump that recognizes 14- and 15-membered macrolides (which include, respectively, erythromycin and azithromycin) is encoded by mef (A) genes.
Methodology for determining the in vitro susceptibility of bacteria to azithromycin: Susceptibility testing should be conducted using standardized laboratory methods, such as those described by the Clinical and Laboratory Standards Institute (CLSI). These include dilution methods (MIC determination) and disk susceptibility methods. Both CLSI and the European Committee on Antimicrobial Susceptibility Testing (EUCAST) provide interpretive criteria for these methods.
Based on a number of studies, it is recommended that the in vitro activity of azithromycin be tested in ambient air to ensure physiological pH of the growth medium. Elevated CO2 tensions, as often used for streptococci and anaerobes, and occasionally for other species, result in a reduction in the pH of the medium. This has a greater adverse effect on the apparent potency of azithromycin than on that of other macrolides.
The CLSI susceptibility breakpoints, based on broth microdilution or agar dilution testing, with incubation in ambient air, are given in the table as follows. (See Table 1.)

The validity of both the dilution and disk diffusion test methods should be verified using quality control (QC) strains, as indicated by the CLSI. Acceptable limits when testing azithromycin against these organisms are listed in the table as follows. (See Table 3.)

EUCAST has also established susceptibility breakpoints for azithromycin based on MIC determination. The EUCAST susceptibility criteria are listed in the table as follows. (See Table 4.)