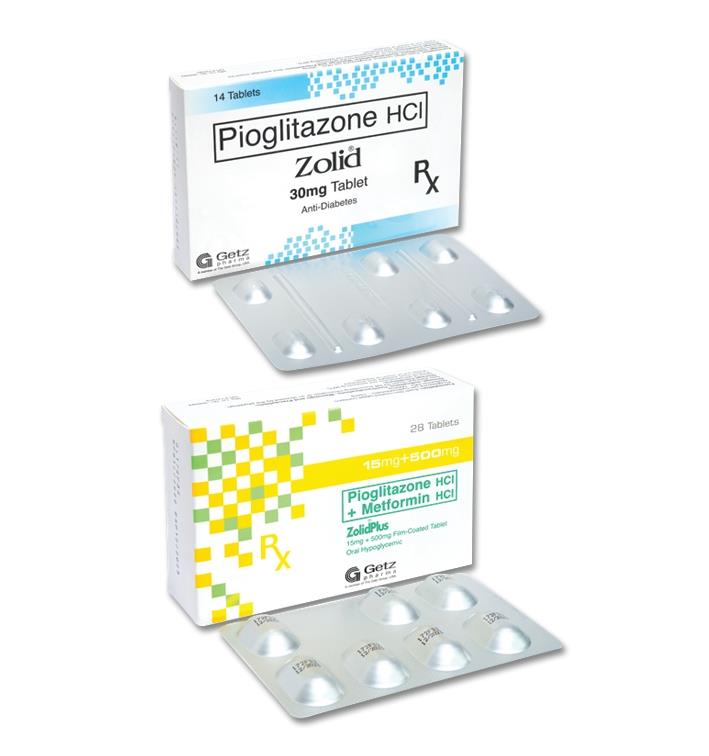 Concise Prescribing Info Full Prescribing Info Contents Description Action Indications/Uses Dosage/Direction for Use Contraindications Warnings Special Precautions Use In Pregnancy & Lactation Adverse Reactions Drug Interactions Storage MIMS Class ATC Classification Regulatory Classification Presentation/Packing
Full Prescribing Info
Action
Zolid: Pioglitazone is an oral antidiabetic agent used in the management of type 2 diabetes mellitus [also known as non-insulin-dependent diabetes mellitus (NIDDM) or adult-onset diabetes] that acts primarily by decreasing insulin resistance. Pioglitazone belongs to a different chemical class and has a different pharmacological action than the sulfonylureas, metformin or the α-glucosidase inhibitors.
Pharmacology: Mechanism of Action: Pioglitazone decreases insulin resistance in the periphery and in the liver resulting in increased insulin-dependent glucose disposal and decreased hepatic glucose output. Unlike sulfonylureas, pioglitazone is not an insulin secretagogue. Pioglitazone is a potent and highly selective agonist for peroxisome proliferator-activated receptor-gamma (PPARγ), PPAR receptors are found in tissues important for insulin action such as adipose tissue, skeletal muscle and liver.
Zolid: Pioglitazone is a thiazolidinedione antidiabetic agent that depends on the presence of insulin for its mechanism of action. Activation of PPARγ nuclear receptors modulates the transcription of a number of insulin responsive genes involved in the control of glucose and lipid metabolism.
ZolidPlus: Insulin resistance is known to play a major role in the pathogenesis of type 2 diabetes.
Metformin HCl is an antihyperglycemic agent which improves glucose tolerance in patients with type 2 diabetes, lowering both basal and postprandial plasma glucose. It does not stimulate insulin secretion and therefore does not produce hypoglycemia.
Metformin HCl may act via 3 mechanisms: By reduction of hepatic glucose production by inhibiting gluconeogenesis and glycogenolysis; in muscle, by modestly increasing insulin sensitivity, improving peripheral glucose uptake and utilization; and by delaying intestinal glucose absorption.
Pharmacokinetics: Absorption: Following oral administration, in the fasting state, pioglitazone is first measurable in serum within 30 min, with peak concentrations observed within 2 hrs. Food slightly delays the time to peak serum concentration for 3-4 hrs, but does not alter the extent of absorption.
ZolidPlus: Metformin HCl is slowly and incompletely absorbed from the gastrointestinal tract. The absolute bioavailability of a single 500 mg dose is reported to be about 50-60% given under fasting conditions. Food decreases the extent and slightly delays the absorption of metformin.
Distribution: Pioglitazone is extensively protein bound (>99%) in human serum, principally to serum albumin. Pioglitazone also binds to other serum proteins, but with lower affinity. Metabolites M-III and M-IV also are extensively bound (>98%) to serum albumin.
Zolid: The mean apparent volume of distribution (Vd/F) of pioglitazone following single-dose administration is 0.63±0.41 (mean±SD) L/kg of body weight.
ZolidPlus: Metformin HCl is negligibly bound to plasma proteins. Metformin partitions into erythrocytes, most likely as a function of time. The blood peak is lower than the plasma peak and appears at approximately the same time.
Metabolism: Pioglitazone undergoes extensive hepatic metabolism by hydroxylation of aliphatic, methylene groups (in Zolid); extensively metabolized by hydroxylation and oxidation; the metabolites also partly converted to glucuronide or sulfate conjugates (in ZolidPlus). This is predominantly via cytochrome P-450 2CB and 3A4. Three of the 6 metabolites formed are active. The major circulating metabolite is M-IV (1-hydroxyethyl pioglitazone), which accounts for most of the drug-related material in human plasma and probably accounts for much of the therapeutic efficacy.
ZolidPlus: Metformin is excreted unchanged in the urine. No metabolites have been identified in humans.
Elimination: Following oral administration, approximately 15-30% of the pioglitazone dose is recovered in the urine. Renal elimination of pioglitazone is negligible, and the drug is excreted primarily as metabolites and their conjugates. It is presumed that most of the oral dose is excreted into the bile either unchanged or as metabolites and eliminated in the feces.
The mean serum t½ of pioglitazone and total pioglitazone ranges from 3-7 hrs and 16-24 hrs, respectively. Pioglitazone has an apparent clearance, CL/F, calculated to be 5-7 L/hr.
ZolidPlus: Metformin HCl: Following oral administration, approximately 90% of the absorbed drug is eliminated via the renal route within the first 24 hrs.
Special Populations: Renal Insufficiency: In patients with renal impairment, plasma concentrations of pioglitazone and its metabolites are lower than those seen in subjects with normal renal function, but with similar oral clearance of parent medicine. Thus free (unbound) pioglitazone concentration remains unchanged. Dose adjustment in patients with renal dysfunction is not recommended.
ZolidPlus: Metformin HCl: In subjects with decreased renal function, the plasma and blood t½ of metformin is prolonged and the renal clearance is decreased in proportion to the decrease in creatinine clearance.
Hepatic Insufficiency: Patients with impaired hepatic function (Child-Pugh Grade B/C) have an approximate 45% reduction in pioglitazone and total pioglitazone mean peak concentrations but no change in the mean AUC values.
ZolidPlus: Metformin HCl: No pharmacokinetics studies of metformin have been conducted in subjects with hepatic insufficiency.
Elderly: Zolid: No clinically significant differences between elderly and young subjects were observed.
Children: Zolid: Pharmacokinetic data in the pediatric population are not available.
Gender: Zolid: The mean Cmax and AUC values were increased 20-60% in females. Since the therapy should be individualized for each patient to achieve glycemic control, no dose adjustment is recommended based on gender alone.