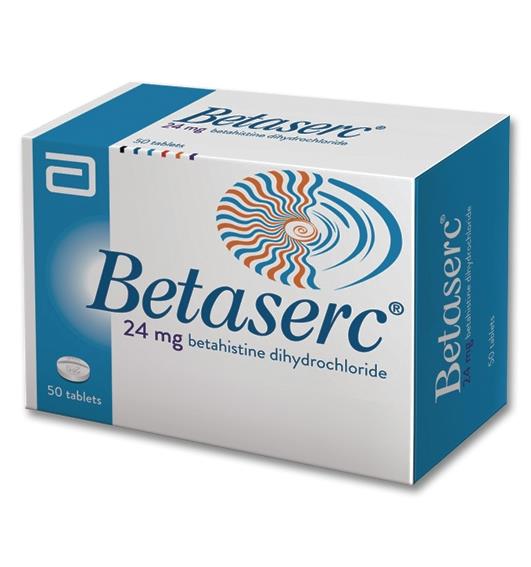 Concise Prescribing Info Full Prescribing Info Contents Description Action Indications/Uses Dosage/Direction for Use Overdosage Contraindications Special Precautions Use In Pregnancy & Lactation Adverse Reactions Drug Interactions Caution For Usage Storage MIMS Class ATC Classification Regulatory Classification Presentation/Packing
Full Prescribing Info
Contents
Betahistine dihydrochloride.
Description
Betaserc tablets contain 24 mg corresponding to 15.63mg betahistine.
The purpose of the scoreline is only to facilitate breaking for ease of swallowing and not intended to divide the tablet into two doses.
Excipients/Inactive Ingredients: Microcrystalline cellulose, mannitol (E421), citric acid monohydrate, colloidal anhydrous silica, talc.
Action
Pharmacotherapeutic group: Anti-vertigo preparations.
Pharmacology: Pharmacodynamics: The mechanism of action of betahistine is partly understood. There are several plausible hypotheses that are supported by animal studies and human data: Betahistine affects the histaminergic system: Betahistine acts both as a partial histamine H1-receptor agonist and histamine H3 receptor antagonist also in neuronal tissue, and has negligible H2-receptor activity. Betahistine increases histamine turnover and release by blocking presynaptic H3- receptors and inducing H3-receptor downregulation.
Betahistine may increase blood flow to the cochlear region as well as to the whole brain: Pharmacological testing in animals has shown that the blood circulation in the striae vascularis of the inner ear improves, probably by means of a relaxation of the precapillary sphincters of the microcirculation of the inner ear. Betahistine was shown to increase cerebral blood flow in humans.
Betahistine facilitates vestibular compensation: Betahistine accelerates the vestibular recovery after unilateral neurectomy in animals, by promoting and facilitating central vestibular compensation; this effect, characterized by an up-regulation of histamine turnover and release, is mediated through H3 Receptor antagonism. In human subjects, recovery time after vestibular neurectomy was also reduced when treated with betahistine.
Betahistine alters neuronal firing in the vestibular nuclei: Betahistine was also found to have a dose dependent inhibiting effect on spike generation of neurons in lateral and medial vestibular nuclei.
The pharmacodynamic properties as demonstrated in animals may contribute to the therapeutic benefit of betahistine in the vestibular system.
The efficacy of betahistine was shown in studies in patients with vestibular vertigo and with Ménière's disease as was demonstrated by improvements in severity and frequency of vertigo attacks.
Pharmacokinetics: Absorption: Orally administered betahistine is readily and almost completely absorbed from all parts of the gastro-intestinal tract. After absorption, the drug is rapidly and almost completely metabolized into 2-pyridylacetic acid. Plasma levels of betahistine are very low.
Pharmacokinetic analyses are therefore based on 2-PAA measurements in plasma and urine.
Under fed conditions Cmax is lower compared to fasted conditions. However, total absorption of betahistine is similar under both conditions, indicating that food intake only slows down the absorption of betahistine.
Distribution: The percentage of betahistine that is bound by blood plasma proteins is less than 5%.
Biotransformation: After absorption, betahistine is rapidly and almost completely metabolized into 2-PAA (which has no pharmacological activity). After oral administration of betahistine, the plasma (and urinary) concentration of 2-PAA reaches its maximum 1 hour after intake and declines with a half-life of about 3.5 hours.
Excretion: 2-PAA is readily excreted in the urine. In the dose range of 8 to 48 mg, about 85% of the original dose is recovered in the urine. Renal or fecal excretion of betahistine itself is of minor importance.
Linearity: Recovery rates are constant over the oral dose range of 8 - 48 mg indicating that the pharmacokinetics of betahistine are linear, and suggesting that the involved metabolic pathway is not saturated.
Toxicology: Pre-clinical safety data: Chronic toxicity: Adverse effects in the nervous system were seen in dogs and baboons after intravenous doses at and above 120 mg/kg.
Studies on the chronic oral toxicity of betahistine dihydrochloride were performed in rats over a period of 18 months and in dogs over 6 months. Doses of 500 mg/kg in rats and 25 mg/kg in dogs were tolerated without changes in the clinical chemical and hematological parameters. There were no histological findings related to treatment at these dosages. After increasing the dose to 300 mg/kg, the dogs showed vomiting. In an investigational study with betahistine in rats over 6 months at 39 mg/kg and above hyperemia in some tissues was reported in the literature. Data presented in the publication are limited. Therefore, the impact of this finding in this study is not clear.
Mutagenic and carcinogenic potential: Betahistine does not have mutagenic potential. Special carcinogenicity studies were not performed with betahistine dihydrochloride. However, in the 18 months chronic toxicity studies in rats there was no indication of any tumors, neoplasms or hyperplasia in the histopathological examination. Therefore, betahistine dihydrochloride up to a dose of 500 mg/kg did not show any evidence for carcinogenic potential in this limited 18 months study.
Reproduction toxicity: Betahistine has no effects on fertility in male and female rats and is not teratogenic in rats and rabbits up to and including 1000 mg/kg for rats and 75 mg/kg in rabbits. In a pre- and postnatal development study in rats, lower pup weight, smaller litter size and lower viability in F1 pups and increased post implantation loss in F1 generation were seen at maternally toxic doses of 1000 mg. Lower average force for startle response test was observed in F1 pups of 300 and 1000 mg/kg dose groups. At 100 mg/kg, no effects on pre- and postnatal development were noted. The relevance of changes noticed at higher doses to humans is unknown.
Indications/Uses
Ménière's syndrome as defined by the following core symptoms: vertigo (with nausea/vomiting), hearing loss (hardness of hearing), tinnitus (ringing in the ears).
Symptomatic treatment of vestibular vertigo.
Dosage/Direction for Use
The dosage for adults is 24-48 mg divided over the day. (See table.)

Should be swallowed with water.
The dosage should be individually adapted according to the response. Improvement can sometimes only be observed after a couple of weeks of treatment. The best results are sometimes obtained only after a few months. There are indications that treatment from the onset of the disease prevents its progression and/or the loss of hearing in later phases of the disease.
Pediatric population: Betaserc is not recommended for use in children under the age of 18 years due to insufficient data on safety and efficacy.
Overdosage
Symptoms of overdose: A few overdose cases have been reported. Some patients experienced mild to moderate symptoms with doses up to 640mg (e.g. nausea, somnolence and abdominal pain).
More serious complications (e.g. convulsions, pulmonary and cardiac complications) were observed in cases of intentional overdose of betahistine, especially in combination with other overdosed drugs.
Treatment of overdose: No specific antidote is known. Treatment of overdose should include standard supportive measures.
Contraindications
Hypersensitivity to the active substance or to any of the excipients.
Phaeochromocytoma.
Special Precautions
Patients with bronchial asthma and history of peptic ulcer need to be carefully monitored during the therapy.
Effects on ability to drive and use machines: Betahistine is indicated for Ménière's syndrome defined by the triad of core symptoms vertigo, hearing loss, tinnitus and for symptomatic treatment of vestibular vertigo. Both diseases can negatively affect the ability to drive and use machines.
In clinical studies specifically designed to investigate the ability to drive and use machines betahistine had no or negligible effects.
Use In Pregnancy & Lactation
Pregnancy: There is insufficient data on the use of betahistine in pregnant women. Animal studies do not indicate direct or indirect harmful effects with respect to reproductive toxicity. Betahistine should not be used during pregnancy unless clearly necessary.
Lactation: It is not known whether betahistine is excreted in human milk. Betahistine is excreted in rat milk. Effects seen post-partum in animal studies were limited to very high doses.The importance of the drug to the mother should be weighed against the benefits of nursing and the potential risks for the child.
Fertility: Animal studies did not show effects on fertility in rats.
Adverse Reactions
The following undesirable effects have been experienced with the following indicated frequencies in betahistine-treated patients in placebo-controlled clinical trials: very common (≥1/10); common (≥1/100 to <1/10); uncommon (≥1/1,000 to <1/100); rare (≥1/10,000 to <1/1,000); very rare (<1/10,000).
Gastrointestinal disorders: Common: nausea and dyspepsia.
Nervous system disorders: Common: headache.
In addition to those events reported during clinical trials, the following undesirable effects have been reported spontaneously during post-marketing use and in scientific literature. A frequency cannot be estimated from the available data and is therefore classified as "not known".
Immune System disorders: Hypersensitivity reactions (e.g. anaphylaxis).
Gastrointestinal disorders: Mild gastric complaints (e.g. vomiting, gastrointestinal pain, abdominal distension and bloating). These can normally be dealt with by taking the dose during meals or by lowering the dose.
Skin and subcutaneous tissue disorders: Cutaneous and sub cutaneous hypersensitivity reactions, in particular angioneurotic oedema, urticaria, rash and pruritus.
View ADR Monitoring Form
Drug Interactions
No in vivo interaction studies have been performed. Based on in vitro data, no in vivo inhibition of Cytochrome P450 enzymes is expected.
In vitro data indicate an inhibition of betahistine metabolism by drugs that inhibit monoamineoxidase (MAO), including MAO subtype B (e.g. selegiline). Caution is recommended when using betahistine and MAO inhibitors (including MAO-B selective) concomitantly.
As betahistine is an analogue of histamine, interaction of betahistine with antihistamines may in theory affect the efficacy of one of these drugs.
Caution For Usage
Incompatibilities: Not applicable.
Special Precautions for disposal and other handling: Any unused product or waste material should be disposed of in accordance with local requirements.
Storage
Do not store above 30°C.
Store in the original package in order to protect from light.
Shelf life: 3 years.
MIMS Class
Antivertigo Drugs
ATC Classification
N07CA01 - betahistine ; Belongs to the class of antivertigo preparations.

Regulatory Classification
POM
Presentation/Packing
Tab 24 mg (round, biconvex, scored, almost white to white, with beveled edges, diameter is 10mm, tablet weight is approximately 375mg, inscriptions are "289" on either side of the score line) x 50's.