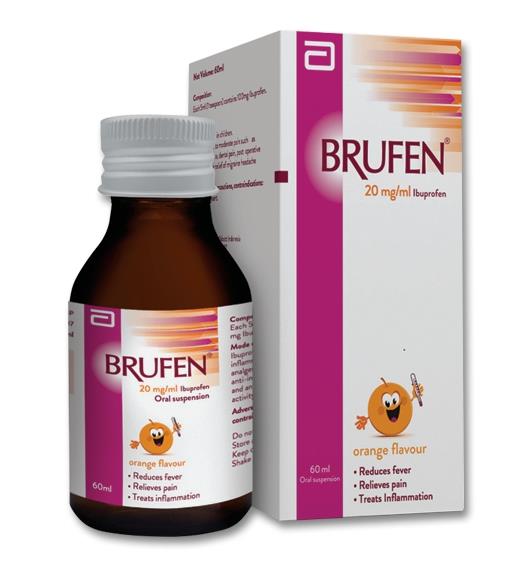 Concise Prescribing Info Full Prescribing Info Contents Action Indications/Uses Dosage/Direction for Use Overdosage Contraindications Special Precautions Use In Pregnancy & Lactation Adverse Reactions Drug Interactions Storage MIMS Class ATC Classification Regulatory Classification Presentation/Packing
Full Prescribing Info
Contents
Ibuprofen.
Action
Pharmacology: Pharmacodynamics: Ibuprofen is a propionic acid derivative with analgesic, anti-inflammatory and anti-pyretic activity. The drug's therapeutic effects are thought to result from its inhibitory effect on the enzyme cyclooxygenase, which results in a marked reduction in prostaglandin synthesis.
Experimental data suggest that ibuprofen may competitively inhibit the effect of low dose aspirin on platelet aggregation when they are dosed concomitantly. Some pharmacodynamics studies show that when single doses of ibuprofen 400 mg were taken within 8 h before or within 30 min after immediate release aspirin dosing (81 mg), a decreased effect of acetylsalicylic acid/aspirin on the formation of thromboxane or platelet aggregation occurred. Although there are uncertainties regarding extrapolation of these data to the clinical situation, the possibility that regular long-term use of ibuprofen may reduce the cardioprotective effect of low-dose acetylsalicylic acid/aspirin cannot be excluded. No clinically relevant effect is considered to be likely for occasional ibuprofen use (see Interactions).
Pharmacokinetics: Ibuprofen is rapidly absorbed from the gastrointestinal tract, peak serum concentrations occurring one to two hours after administration. The elimination half-life is approximately two hours.
Ibuprofen is metabolized in the liver to two inactive metabolites and the kidney excretes these, together with unchanged ibuprofen, either as such or as conjugates. Excretion by the kidney is both rapid and complete.
Ibuprofen is extensively bound to plasma proteins.
Indications/Uses
Brufen is indicated for its anti-inflammatory and analgesic effect in the treatment of rheumatoid arthritis, osteoarthritis and allied conditions, non-articular rheumatism and soft tissue injuries. Brufen is also indicated for its analgesic effect in the relief of mild to moderate pain such as dysmenorrhoea, dental pain, post-operative pain and in the relief of migraine headache. Its antipyretic activity is effective in reducing fever.
Dosage/Direction for Use
Adults and adolescents older than 12 years (≥ 40kg): The recommended initial dosage is 1200mg - 1800mg daily in divided doses. Some patients can be maintained on 600 - 1200mg daily. Generally, the maximum daily dose of Brufen should not exceed 2400mg in divided doses.
Paediatric population: The dose is 20-40 mg/kg of bodyweight in divided doses according to the severity of the disease.
This can be achieved by using the 20mg/ml suspension as follows: (See Table 1.)

View ADR Monitoring Form
Drug Interactions
Care should be taken in patients treated with any of the following drugs as interactions have been reported in some patients: Anti-hypertensives, beta-blockers and diuretics: NSAIDs may reduce the effect of anti-hypertensives, such as ACE inhibitors, angiotensin II-receptor antagonists,beta blockers and diuretics. Diuretics can also increase the risk of nephrotoxicity of NSAIDs.
Lithium: NSAIDs may decrease elimination of lithium.
Methotrexate: NSAIDs may inhibit the tubular secretion of methotrexate and reduce clearance of methotrexate.
Anti-coagulants: NSAIDs may enhance the effects of anticoagulants, such as warfarin.
Anti-platelet agents and selective serotonin reuptake inhibitors (SSRIs) (e.g. clopidogrel and ticlopidine): Increased risk of gastrointestinal bleeding with NSAIDs.
Aminoglycosides: NSAIDs may decrease the excretion of aminoglycosides.
Acetylsalicylic acid/Aspirin: As with other products containing NSAIDs, concomitant administration of ibuprofen and acetylsalicylic acid/aspirin is not generally recommended because of the potential of increased adverse effects.
Experimental data suggest that ibuprofen may competitively inhibit the effect of low dose acetylsalicylic acid/aspirin on platelet aggregation when they are dosed concomitantly. Although there are uncertainties regarding extrapolation of these data to the clinical situation, the possibility that regular, long-term use of ibuprofen may reduce the cardioprotective effect of low-dose acetylsalicylic acid cannot be excluded.No clinically relevant effect is considered to be likely for occasional ibuprofen use (see Pharmacology: Pharmacodynamics under Actions).
Cardiac Glycosides: NSAIDs may exacerbate heart failure, reduce glomerular filtration rate and increase plasma cardiac glycoside levels.
Cholestyramine: The concomitant administration of ibuprofen and cholestyramine may reduce the absorption of ibuprofen in the gastrointestinal tract. However, the clinical significance is unknown.
Cyclosporine: Increased risk of nephrotoxicity with NSAIDs.
Corticosteroids: Increased risk of gastrointestinal ulceration or bleeding with NSAIDs.
Cox-2 Inhibitors and other NSAIDs: Concomitant use with other NSAIDs, including cyclooxygenase-2 selective inhibitors, should be avoided due to the potential for additive effects (see Precautions).
Herbal Extracts: Ginkgo biloba may potentiate the risk of bleeding with NSAIDs.
Mifepristone: A decrease in the efficacy of the medicinal product can theoretically occur due to the antiprostaglandin properties of NSAIDs. Limited evidence suggests that coadministration of NSAIDs on the day of prostaglandin administration does not adversely influence the effects of mifepristone or the prostaglandin on cervical ripening or uterine contractility and does not reduce the clinical efficacy of medicinal termination of pregnancy.
Quinolone Antibiotics: Animal data indicate that NSAIDs can increase the risk of convulsions associated with quinolone antibiotics. Patients taking NSAIDs and quinolones may have an increased risk of developing convulsions.
Sulfonylureas: NSAIDs may potentiate the effects of sulfonylurea medications.
There have been rare reports of hypoglycemia in patients on sulfonylurea medications receiving ibuprofen.
Tacrolimus: Possible increased risk of nephrotoxicity when NSAIDs are given with tacrolimus.
Zidovudine: Increased risk of hematological toxicity when NSAIDs are given with zidovudine. There is evidence of an increased risk of hemarthroses and hematoma in HIV(+) hemophiliacs receiving concurrent treatment with zidovudine and ibuprofen.
CYP2C9 Inhibitors: Concomitant administration of ibuprofen with CYP2C9 inhibitors may increase the exposure to ibuprofen (CYP2C9 substrate). In a study with voriconazole and fluconazole (CYP2C9 inhibitors), an increased S(+)-ibuprofen exposure by approximately 80 to 100% has been shown. Reduction of the ibuprofen dose should be considered when potent CYP2C9 inhibitors are administered concomitantly, particularly when high-dose ibuprofen is administered with either voriconazole or fluconazole.
Storage
Do not store above 30°C.
Shelf life: 2 years.
MIMS Class
Nonsteroidal Anti-Inflammatory Drugs (NSAIDs)
ATC Classification
M01AE01 - ibuprofen ; Belongs to the class of propionic acid derivatives of non-steroidal antiinflammatory and antirheumatic products.