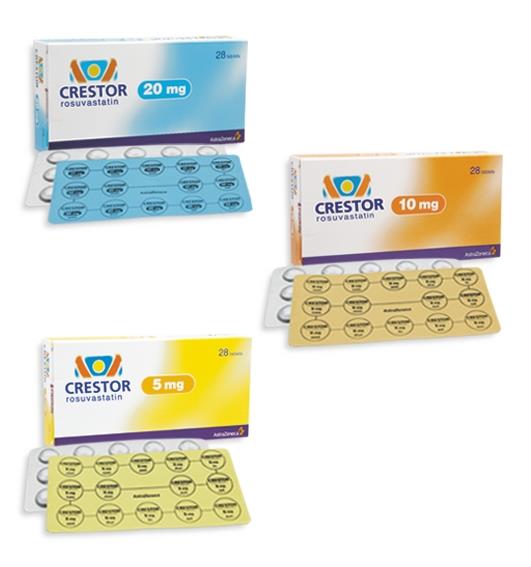 Concise Prescribing Info Full Prescribing Info Contents Description Action Indications/Uses Dosage/Direction for Use Overdosage Contraindications Special Precautions Use In Pregnancy & Lactation Adverse Reactions Drug Interactions Caution For Usage Storage MIMS Class ATC Classification Regulatory Classification Presentation/Packing
Full Prescribing Info
Contents
Rosuvastatin calcium.
Description
Each tablet contains 5 mg, 10 mg, or 20 mg of rosuvastatin as rosuvastatin calcium.
Excipients/Inactive Ingredients: Tablet core: Crospovidone; Lactose monohydrate; Microcrystalline cellulose; Calcium phosphate; Magnesium stearate.
Tablet coat: Titanium dioxide (E171); Ferric oxide, yellow (E172); Ferric oxide, red (E172); Glycerol triacetate; Lactose monohydrate; Hypromellose.
Action
ATC code: C10AA07.
Pharmacology: Pharmacodynamics: Mechanism of action: Rosuvastatin is a selective, potent and competitive inhibitor of HMG-CoA reductase, the rate-limiting enzyme that converts 3-hydroxy-3-methylglutaryl coenzyme A to mevalonate, a precursor of cholesterol. Triglycerides (TG) and cholesterol in the liver are incorporated, with apolipoprotein B (ApoB), into very low density lipoprotein (VLDL) and released into the plasma for delivery to peripheral tissues. VLDL particles are TG-rich. Cholesterol-rich low density lipoprotein (LDL) is formed from VLDL and is cleared primarily through the high affinity LDL receptor in the liver.
Rosuvastatin produces its lipid-modifying effects in two ways; it increases the number of hepatic LDL receptors on the cell-surface, enhancing uptake and catabolism of LDL and it inhibits the hepatic synthesis of VLDL, thereby reducing the total number of VLDL and LDL particles.
High density lipoprotein (HDL), which contains ApoA-I is involved, amongst other things, in transport of cholesterol from tissues back to the liver (reverse cholesterol transport).
The involvement of LDL-C in atherogenesis has been well documented. Epidemiological studies have established that high LDL-C, TG, low HDL-C and ApoA-I have been linked to a higher risk of cardiovascular disease. Intervention studies have shown the benefits on mortality and CV event rates of lowering LDL-C and TG or raising HDL-C. More recent data has linked the beneficial effects of HMG-CoA reductase inhibitors to lowering of non-HDL (i.e. all circulating cholesterol not in HDL) and ApoB or reducing the ApoB/ApoA-I ratio.
Clinical efficacy: CRESTOR reduces elevated LDL-cholesterol, total cholesterol and triglycerides and increases HDL-cholesterol. It also lowers ApoB, nonHDL-C, VLDL-C, VLDL-TG and increases ApoA-I (see Table 1).
CRESTOR also lowers the LDL-C/HDL-C, total C/HDL-C, nonHDL-C/HDL-C and ApoB/ApoA-I ratio's.
A therapeutic response to CRESTOR is obtained within 1 week of commencing therapy and 90% of maximum response is usually achieved in 2 weeks. The maximum response is usually achieved by 4 weeks and is maintained after that. (See Table 1.)

The data in Table 1 are confirmed by the broader clinical programme of over 3,500 patients given CRESTOR.
In a study of patients with heterozygous familial hypercholesterolaemia, 435 subjects were given CRESTOR from 20 mg to 80 mg in a force-titration design. All doses of CRESTOR showed a beneficial effect on lipid parameters and treatment to target goals. Following titration to 40 mg (12 weeks of treatment) LDL-C was reduced by 53%.
In a force-titration open label study, 42 patients with homozygous familial hypercholesterolaemia were evaluated for their response to CRESTOR 20-40 mg titrated at a 6 week interval. In the overall population, the mean LDL-C reduction was 22%. In the 27 patients with at least a 15% reduction by week 12 (considered to be the responder population), the mean LDL-C reduction was 26% at the 20 mg dose and 30% at the 40 mg dose. Of the 13 patients with an LDL-C of less than 15%, 3 had no response or an increase in LDL-C.
In the METEOR study, the effect of CRESTOR 40 mg on the progression of atherosclerosis was assessed by B-mode ultrasound of the carotid arteries. In this multi-center, double blind, placebo-controlled clinical trial, 984 subjects at low risk for coronary heart disease (defined as Framingham risk < 10% over ten years) and with a mean LDL-C of 154.5 mg/dL but with subclinical atherosclerosis as detected by CIMT (Carotid Intima Media Thickness) were randomized in a 5:2 ratio to treatment with either CRESTOR 40 mg or placebo for 2 years. CRESTOR significantly slowed the progression of carotid atherosclerosis compared to placebo. The difference in the rate of change in the maximum CIMT of all 12 carotid artery sites between CRESTOR-treated patients and placebo-treated patients was -0.0145 mm/year (95% CI -0.0196, -0.0093; p<0.0001). The change from baseline for the CRESTOR group was -0.0014 mm/year (95% CI -0.0041, 0.0014), but was not significantly different from zero (p=0.3224). The beneficial effects of CRESTOR were consistent across all 4 secondary CIMT endpoints. There was significant progression in the placebo group (+0.0131 mm/year; 95% CI 0.0087, 0.0174; p<0.0001). In the CRESTOR group, 52.1% of patients demonstrated an absence of disease progression (i.e. regressed) compared to 37.7% of patients in the placebo group (p=0.0002). CRESTOR 40 mg was well-tolerated and the data were consistent to the established safety profile for CRESTOR.
In a randomized, multicenter, double-blind crossover study, 32 patients (27 with ε2/ε2 genotype and 4 with apo E mutation [Arg145Cys]) with dysbetalipoproteinaemia (Fredrickson type III) received rosuvastatin 10 or 20 mg daily for 6 weeks. Rosuvastatin reduced non-HDL-C (primary end point) and circulating remnant lipoprotein levels. Results are shown in the table as follows. (See Table 2.)

CRESTOR is effective in adults with hypercholesterolaemia, with and without hypertriglyceridaemia, regardless of race, sex or age and in special populations such as diabetics or patients with familial hypercholesterolaemia.
the Justification for the Use of Statins in Primary Prevention: An Intervention Trial Evaluating Rosuvastatin (JUPITER) study, the effect of CRESTOR (rosuvastatin calcium) on the occurrence of major cardiovascular (CV) disease events was assessed in 17,802 men (≥ 50 years) and women (≥ 60 years) who had no clinically evident cardiovascular disease, LDL-C levels < 130 mg/dL (3.3 mmol/l) and hs-CRP levels ≥ 2 mg/L. The study population had an estimated baseline coronary heart disease risk of 11.6% over 10 years based on the Framingham risk criteria and included a high percentage of patients with additional risk factors such as hypertension (58%), low HDL-C levels (23%), cigarette smoking (16%) or a family history of premature CHD (12%). Study participants had a median baseline LDL-C of 108 mg/dL and hsCRP of 4.3 mg/L. Study participants were randomly assigned to placebo (n=8901) or rosuvastatin 20 mg once daily (n=8901) and were followed for a mean duration of 2 years. The JUPITER study was stopped early by the Data Safety Monitoring Board due to meeting predefined stopping rules for efficacy in rosuvastatin-treated subjects.
The primary endpoint was a composite end point consisting of the time-to-first occurrence of any of the following major CV events: CV death, nonfatal myocardial infarction, nonfatal stroke, hospitalization for unstable angina or an arterial revascularization procedure.
Rosuvastatin significantly reduced the risk of major CV events (252 events in the placebo group vs. 142 events in the rosuvastatin group) with a statistically significant (p<0.001) relative risk reduction of 44% and absolute risk reduction of 1.2% (see Figure 1). The risk reduction for the primary end point was consistent across the following predefined subgroups: age, sex, race, smoking status, family history of premature CHD, body mass index, LDL-C, HDL-C or hsCRP levels. (See Figure 1.)

Effect of rosuvastatin on co-administered medicinal products: Warfarin: As with other HMG-CoA reductase inhibitors, co-administration of CRESTOR and warfarin may result in a rise in INR compared to warfarin alone. In patients taking vitamin K antagonists monitoring of INR is recommended both at initiation or cessation of therapy with CRESTOR or following dose adjustment.
Oral contraceptive/hormone replacement therapy (HRT): Concomitant use of CRESTOR and an oral contraceptive resulted in an increase in ethinyl oestradiol and norgestrel AUC of 26% and 34%, respectively. These increased plasma levels should be considered when selecting oral contraceptive doses. There are no pharmacokinetic data available in subjects taking concomitant CRESTOR and HRT and therefore a similar effect cannot be excluded. However, the combination has been extensively used in women in clinical trials and was well tolerated.
Other medicinal products: Based on data from specific interaction studies, no clinically relevant interaction with digoxin is expected.
Endocrine function: Although clinical studies have shown that rosuvastatin alone does not reduce basal plasma cortisol levels or impairs adrenal reserve, caution should be exercised if any HMG-CoA reductase inhibitor or other lipid-lowering agent is administered concomitantly with drugs that may decrease levels or activity of endogenous steroid hormones (ketoconazole, spironolactone, cimetidine).
Fusidic Acid: Interaction studies with rosuvastatin and fusidic acid have not been conducted. As with other statins, muscle related events, including rhabdomyolysis, have been reported in post-marketing experience with rosuvastatin and fusidic acid given concurrently. Therefore, the combination rosuvastatin and fusidic acid is not recommended. If possible, temporary suspension of rosuvastatin treatment is recommended. If unavoidable, patients should be closely monitored.
Caution For Usage
Instructions for use/handling: No special instructions.
Storage
Do not store above 30°C.
MIMS Class
Dyslipidaemic Agents
ATC Classification
C10AA07 - rosuvastatin ; Belongs to the class of HMG CoA reductase inhibitors. Used in the treatment of hyperlipidemia.