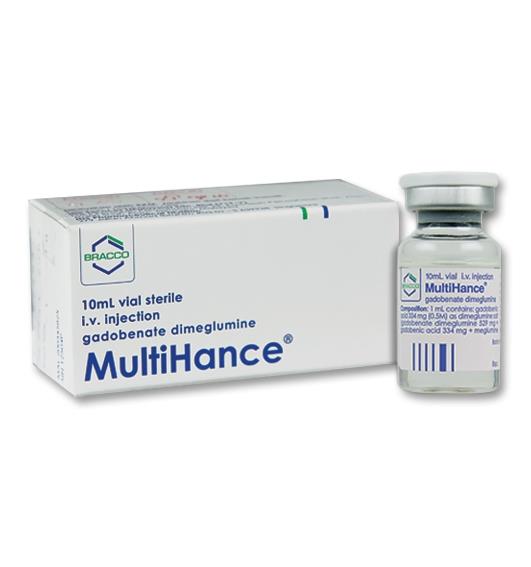 Laboratory abnormalities cited above include hypochromic anaemia, leukocytosis, leukopenia, basophilia, hypoproteinaemia, hypocalcaemia, hyperkalaemia, hyperglycaemia or hypoglycaemia, albuminuria, glycosuria, haematuria, hyperlipidaemia, hyperbilirubinaemia, serum iron increased, and increases in serum transaminases, alkaline phosphatase, lactic dehydrogenase, and in serum creatinine and were reported in equal or less than 0.4% of patients following the administration of MultiHance. However these findings were mostly seen in patients with evidence of pre-existing impairment of hepatic function or pre-existing metabolic disease.
The majority of these events were non-serious, transient and spontaneously resolved without residual effects. There was no evidence of any correlation with age, gender or dose administered.
Paediatric population: In paediatric patients enrolled in clinical trials the most commonly reported adverse reactions included vomiting (1.4%), pyrexia (0.9%) and hyperhydrosis (0.9%). The frequency and nature of adverse reactions was similar to that in adults.
In marketed use, adverse reactions were reported in fewer than 0.1 % of patients.
Most commonly reported were: nausea, vomiting, signs and symptoms of hypersensitivity reactions including angioedema, laryngeal spasm and rash. More severe reactions including anaphylactoid reactions and anaphylactic shock may have fatal outcome.
Injection site reactions due to extravasation of the contrast medium leading to local pain or burning sensations, swelling, blistering and, in rare cases when localised swelling is severe, necrosis have been reported.
Localised thrombophlebitis has also been rarely reported.
Isolated cases of nephrogenic systemic fibrosis (NSF) have been reported with MultiHance in patients co-administered other gadolinium-containing contrast agents (see Precautions).
Reporting of suspected adverse reactions: Reporting suspected adverse reactions after authorisation of the medicinal product is important. It allows continued monitoring of the benefit/risk balance of the medicinal product. Healthcare professionals are asked to report any suspected adverse reactions via the national reporting system.
View ADR Monitoring Form
Drug Interactions
Interaction studies with other medicinal products were not carried out during the clinical development of MultiHance. However no drug interactions were reported during the clinical development programme.
Caution For Usage
Special precautions for disposal and for handlings: MultiHance should be drawn up into the syringe immediately before use and should not be diluted.
Before use, examine the product to assure that the container and closure have not been damaged, the solution is not discoloured and no particulate matter is present.
When MultiHance is used in conjunction with an injector system, the connecting tubes to the patient and the relevant disposable parts should be disposed after each patient examination.
Any additional instructions from the respective equipment manufacturer must also be adhered to.
For single use only. Any unused product or waste material should be disposed of in accordance with local requirements.
Incompatibilities: In the absence of compatibility studies, this medicinal product must not be mixed with other medicinal products.
Storage
Do not freeze.
Shelf life: 3 years.
From a microbiological point of view, the product should be used immediately after drawing into the syringe.
MIMS Class
Radiographic & Diagnostic Agents
ATC Classification
V08CA08 - gadobenic acid ; Belongs to the class of paramagnetic agents used as magnetic resonance imaging contrast media.