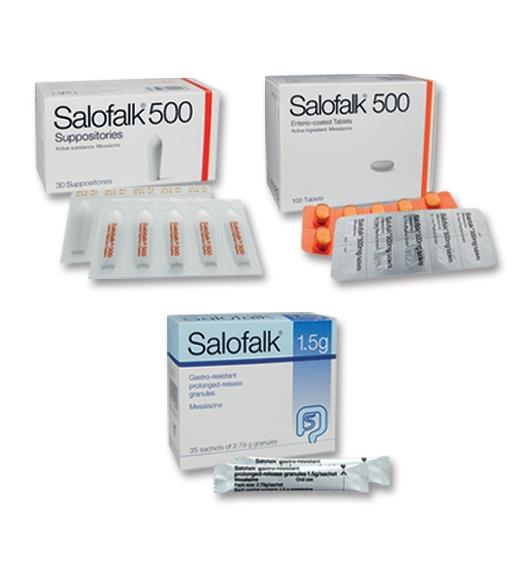 Concise Prescribing Info Full Prescribing Info Contents Description Action Indications/Uses Dosage/Direction for Use Overdosage Contraindications Special Precautions Use In Pregnancy & Lactation Adverse Reactions Drug Interactions Caution For Usage Storage MIMS Class ATC Classification Regulatory Classification Presentation/Packing
Full Prescribing Info
Action
Pharmacotherapeutic group: Aminosalicylic acid and similar agents. ATC code: A07EC02.
Pharmacology: Pharmacodynamics: Mechanism of Action: The mechanism of the anti-inflammatory action is unknown. The results of In-vitro studies indicate that inhibition of lipoxygenase may play a role.
Effects on prostaglandin concentrations in the intestinal mucosa have also been demonstrated. Mesalazine (5-aminosalicylic acid/5-ASA) may also function as a radical scavenger of reactive oxygen compounds.
Mesalazine, orally administered, acts predominantly locally at the gut mucosa and in the submucous tissue from the luminal side of the intestine. It is important, therefore, that mesalazine is available at the regions of inflammation. Systemic bioavailability/plasma concentrations of mesalazine therefore are of no relevance for therapeutic efficacy, but rather a factor for safety. In order to fulfil these criteria, Salofalk tablets are coated with Eudragit L; they are thus gastro-resistant and the release of mesalazine is pH-dependent.
Clinical Studies: Gastro-resistant PR granules: The criteria used to evaluate the efficacy of the substance in the therapy of ulcerative colitis are frequency of bowel movements, rectal haemorrhage, abdominal pain, general well-being, temperature, extraintestinal manifestations, ESR, and haemoglobin. These criteria have been summarised in the clinical activity index (CAI) to evaluate the efficacy of treatment for ulcerative colitis.
The safety and efficacy of Salofalk granules (1.5 g to 3 g 5-ASA/day) was compared against mesalazine tablets (Salofalk 500 mg tablets, 1.5 g to 3.0 g 5-ASA/day) in a double-blind randomised multi-centre study in 233 patients with mild to moderately active ulcerative colitis over a period of 8 weeks. The primary efficacy criterion, complete response rate (per protocol analysis, PP) was very similar in the granules (68%) and the tablets (70%) groups. The efficacy analysis (PP) showed that more patients treated with mesalazine tablets (47%) had to increase the dose from 1.5 g mesalazine/day to 3.0 g mesalazine/day compared to patients treated with granules (38%). Similar results were obtained by the ITT (intention-to-treat) analysis: 39% of the granules group, 45% of the tablets group, i.e., more patients came into remission (49%) with the 1.5 g 5-ASA/day from granules than from tablets (43%). Granules, therefore, in total were at least as efficacious and as well tolerated as the tablets at the same dose. Subgroup analyses showed that the response rates to granules were higher in patients with high baseline disease activity (CAI>8) and with 1 or more extraintestinal manifestations than the tablets: (See Table 1.)