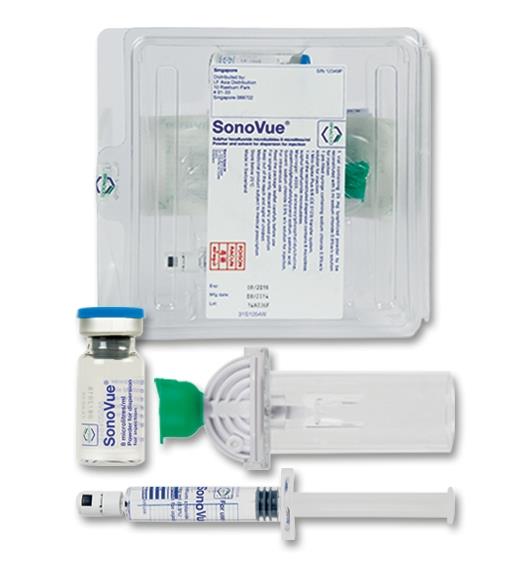 Concise Prescribing Info Full Prescribing Info Contents Description Action Indications/Uses Dosage/Direction for Use Overdosage Contraindications Special Precautions Use In Pregnancy & Lactation Adverse Reactions Drug Interactions Caution For Usage Storage MIMS Class ATC Classification Regulatory Classification Presentation/Packing
Full Prescribing Info
Action
PHARMACOTHERAPEUTIC GROUP: ULTRASOUND CONTRAST MEDIA. ATC CODE: VO8DA05.
Pharmacology: Pharmacodynamics: Sulphur hexafluoride is an inert, innocuous gas, poorly soluble in aqueous solutions. There are literature reports of the use of the gas in the study of respiratory physiology and in pneumatic retinopexy. The addition of sodium chloride 9 mg/ml (0.9%) solution for injection to the lyophilised powder followed by vigorous shaking results in the production of the microbubbles of sulphur hexafluoride. The microbubbles have a mean diameter of about 2.5 μm, with 90% having a diameter less than 6 μm and 99% having a diameter less than 11 μm. Each millilitre of SonoVue contains 8 μl of the microbubbles. The intensity of the reflected signal is dependent on concentration of the microbubbles and frequency of the ultrasound beam. The interface between the sulphur hexafluoride bubble and the aqueous medium acts as a reflector of the ultrasound beam thus enhancing blood echogenicity and increasing contrast between the blood and the surrounding tissues.
Intravenous use: At the proposed clinical doses for intravenous administration, SonoVue has been shown to provide marked increase in signal intensity of more than 2 minutes for B-mode imaging in echocardiography and of 3 to 8 minutes for Doppler imaging of the macrovasculature and microvasculature.
Intravesical use: For ultrasonography of the excretory urinary tract in paediatric patients, after intravesical administration, SonoVue increases the signal intensity of fluids within the urethra, bladder, ureters, and renal pelvis, and facilitates the detection of reflux of fluid from the bladder into the ureters.
The efficacy of SonoVue for detection/exclusion of vesicoureteral reflux was studied in two published open label single centre studies. The presence or absence of vesicoureteral reflux with SonoVue ultrasound was compared to the radiographic reference standard. In one study including 183 patients (366 kidney-ureter units), SonoVue ultrasound was correctly positive in 89 out 103 units with reflux and correctly negative in 226 out of 263 units without reflux. In the second study including 228 patients (463 kidney-ureter units), SonoVue ultrasound was correctly positive in 57 out of 71 units with reflux and correctly negative in 302 out of 392 units without reflux.
Pharmacokinetics: The total amount of sulphur hexafluoride administered in a clinical dose is extremely small, (in a 2 ml dose the microbubbles contain 16 μl of gas). The sulphur hexafluoride dissolves in the blood and is subsequently exhaled.
After a single intravenous injection of 0.03 or 0.3 ml of SonoVue/kg (approximately 1 and 10 times the maximum clinical dose) to human volunteers, the sulphur hexafluoride was cleared rapidly. The mean terminal half-life was 12 minutes (range 2 to 33 minutes). More than 80% of the administered sulphur hexafluoride was recovered in exhaled air within 2 minutes after injection and almost 100% after 15 minutes.
In patients with diffuse interstitial pulmonary fibrosis, the percent of dose recovered in expired air averaged 100% and the terminal half-life was similar to that measured in healthy volunteers.
Toxicology: Preclinical safety data: Non-clinical data reveal no special hazard for humans based on conventional studies of safety pharmacology, genotoxicity and toxicity to reproduction. Caecal lesions observed in some repeat-dose studies with rats, but not in monkeys, are not relevant for humans under normal conditions of administration.
Intravesical local tolerance for SonoVue was also assessed. A single-dose study and a repeat-dose study, both followed by a treatment-free period, were performed in female rats with local toxicity evaluated through macroscopic and histopathological examination of both kidneys, ureters, the urinary bladder and urethra. It did not reveal any test item-related lesions in any of the examined organs, in particular in the urinary bladder, in both the single-dose and the repeat-dose studies. It was therefore concluded that SonoVue is well tolerated in the urinary tract in the rat.