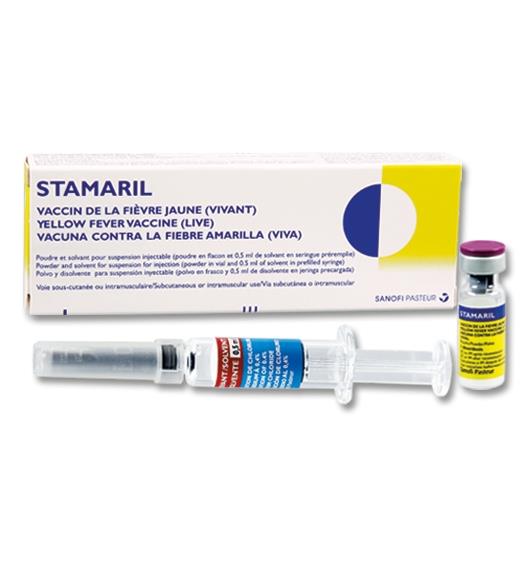 Description of Selected Adverse Reactions: Cases of neurotropic disease (known as YEL-AND), some of which have had a fatal outcome, have been reported to occur within 30 days following vaccination with STAMARIL, and other yellow fever vaccines. YEL-AND may manifest as high fever with cephalalgia that may progress to include one or more of confusion, lethargy, encephalitis, encephalopathy or meningitis. Other neurological signs and symptoms have been reported and include convulsion, Guillain-Barré syndrome and focal neurological deficits (see Precautions).
Cases of viscerotropic disease (known as YEL-AVD and formerly described as "Febrile Multiple Organ-System Failure") have been reported following vaccination with STAMARIL, and other yellow fever vaccines, some of which have been fatal. In the majority of cases reported, the onset of signs and symptoms was within 10 days after the vaccination. Initial signs and symptoms are non-specific and may include fever, myalgia, fatigue, cephalalgia and hypotension, potentially progressing quickly to liver dysfunction with jaundice, muscle cytolysis, thrombocytopenia and acute respiratory and renal failure (see Precautions).
Paediatric Population: The safety of STAMARIL in paediatric population has been studied through a clinical study performed in 393 toddlers aged 12 to 13 months who received STAMARIL and placebo concomitantly.
The safety profile was assessed during the first 4 weeks following vaccination.
The following most frequently reported adverse reactions specific to the paediatric population were reported as "very common": irritability (34.7%), appetite loss (33.7%), crying (32.1%) and drowsiness (22%).
The other adverse reactions reported in toddlers were also reported from studies in general population: Injection site pain (17.6%), fever (16.5%) and vomiting (17.1%) were reported as "very common" in toddlers. Fever and vomiting were more frequently reported than in general population (see table as previously mentioned).
Injection site erythema (9.8%) and injection site swelling (4.4%) were reported as "common" in toddlers, like in general population, however with significantly higher frequencies compared to general population.
Other Special Population: Congenital or acquired immunodeficiency has been recognised as a potential risk factor for serious adverse events, including YEL-AND (see Contraindications and Precautions).
Age of more than 60 years (see Precautions) has been recognised as a potential risk factor for YEL-AVD and YEL-AND.
Age below 9 months (including infants exposed to vaccine through breast-feeding) (see Precautions) has been recognised as a potential risk factor for YEL-AND.
A medical history of thymus dysfunction (see Contraindications and Precautions) has been recognised as a potential risk factor for YEL-AVD.
Reporting of suspected adverse reactions: Reporting suspected adverse reactions after authorisation of the medicinal product is important. It allows continued monitoring of the benefit/risk balance of the medicinal product. Healthcare professionals are asked to report any suspected adverse reactions via the national reporting system.
View ADR Monitoring Form