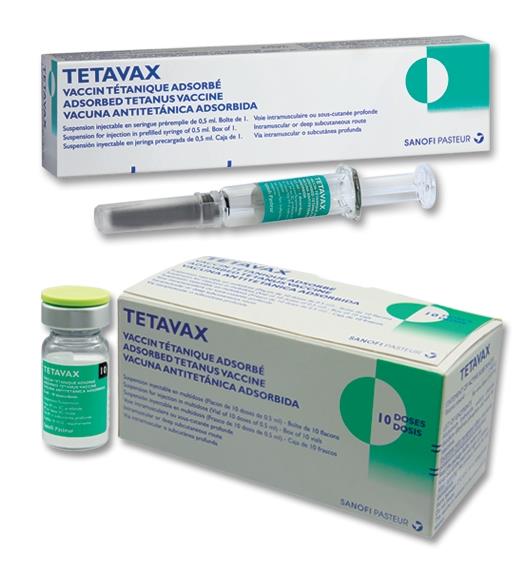 Concise Prescribing Info Full Prescribing Info Contents Description Action Indications/Uses Dosage/Direction for Use Overdosage Contraindications Special Precautions Use In Pregnancy & Lactation Adverse Reactions Drug Interactions Caution For Usage Storage MIMS Class ATC Classification Regulatory Classification Presentation/Packing
Full Prescribing Info
Contents
Tetanus toxoid.
Description
One dose (0.5 ml) contains Tetanus toxoid ≥40 I.U.; adsorbed on hydrated aluminium hydroxide 0.6 mg Al.
Excipients/Inactive Ingredients: Pre-filled syringe: Buffer solution containing sodium chloride, disodium dihydrate phosphate, monopotassium phosphate and water for injections.
Action
Pharmacotherapeutic Group: Tetanus toxoid. ATC Code: J07 AM01.
Pharmacology: Pharmacodynamics: This vaccine is prepared from tetanus toxin detoxified with formaldehyde and purified.
The immune response is activated as from the second injection; it is enhanced after the third one and persists for 5 to 10 years after the fourth one.
Pharmacokinetics: Not applicable.
Toxicology: Preclinical Safety Data: Not applicable.
Indications/Uses
Tetanus prevention and, in particular: Post-exposure tetanus prophylaxis for recent wounds that may have been contaminated with tetanus spores in subjects who have not had any primary vaccination or for whom primary vaccination is incomplete or uncertain; Neonatal tetanus prophylaxis in non-immunised women either of childbearing age or pregnant in countries where neonatal tetanus is frequent; Primary vaccination; Booster injections.
Dosage/Direction for Use
Post-tetanus exposure prophylactic vaccination: When dealing with minor wounds, the doctor must evaluate the risks of Clostridium tetani infection at the injured site.
Disinfecting, debriding the wound and administering the vaccine excepted, the subject must, in some cases, be passively immunized with a human tetanus immunoglobulin injected at a different site (See table hereafter).
Post-tetanus exposure prophylaxis recommendations are summarized as follows: (See table.)

Subjects who have had tetanus must have a primary immunization because the antibody response clinically generated by this disease is not sufficient.
Neonatal Tetanus Prophylaxis: Women of childbearing age or pregnant women that have not yet been immunized must have 2 successive injections at least 4 weeks apart, the first one shall preferably be administered 90 days or more before birth.
Primary Immunization: Whenever adults must be vaccinated, the schedule includes 2 successive injections one or two months apart followed by a booster dose 6 to 12 months after the second injection.
Booster injection: 1 injection of 0.5 ml ten years after primary immunization and every ten years thereafter.
Method of Administration: Given the adsorbed nature of the vaccine, it is recommended to administer it by the intramuscular route in order to minimize local reactions. The recommended sites are the anterolateral face of the thigh or arm.
The deep subcutaneous route may also be used.
The intradermal route must not be used.
Overdosage
Not documented.
Contraindications
The lethal risk associated with tetanus excludes any potential contraindication and imposes postwound exposure prophylaxis.
In other cases: Hypersensitivity to one of the ingredients of the vaccine; Usual contraindications for all vaccinations: vaccination should preferably be postponed in case of fever, acute disease or chronic progressive illness; Hypersensitivity reaction or neurological disorder after a previous injection of vaccine.
Special Precautions
If Guillain-Barré syndrome or brachial neuritis has occurred following receipt of prior vaccine containing tetanus toxoid, the decision to give any vaccine containing tetanus toxoid should be based on careful consideration of the potential benefits and possible risks. Vaccination is usually justified when primary immunizations schedules are incomplete (i.e., fewer than three doses have been received).
Do not inject by the intravascular route. Make sure the needle does not penetrate a blood vessel.
As with all injectable vaccines, appropriate medical treatment should always be readily available and supervision provided in case of an anaphylactic reaction following administration of the vaccine.
An immunosuppressive treatment or an immunodeficiency condition may induce a decrease in the immune response to the vaccine. It is therefore recommended to wait for the end of the treatment for the vaccination or to make sure that the subject is well protected. However, the vaccination of subjects with chronic immunodepression, such as HIV infection, is recommended if the underlying disease allows an antibody response, even if limited.
In order to prevent hypersensitivity reactions, avoid administering the vaccine to persons who have received a complete primary vaccination or a booster dose in the previous 5 years.
The potential risk of apnoea and the need for respiratory monitoring for 48 - 72 h should be considered when administering the primary immunization series to very premature infants (born ≤ 28 weeks of gestation) and particularly for those with a previous history of respiratory immaturity. As the benefit of vaccination is high in this group of infants, vaccination should not be withheld or delayed.
Effects on Ability to Drive and Use Machines: Not applicable.
Use In Pregnancy & Lactation
No evidence exists of risk from vaccinating pregnant women with bacterial vaccines or toxoids. However, animal reproduction studies have not been conducted with Tetavax.
It is not known whether Tetavax can cause fetal harm when administered to a pregnant women or can affect reproduction capacity. Tetavax should be given to a pregnant women only if clearly needed.
It is not known whether Tetavax is excreted in human milk. Because many drugs are excreted in human milk, caution should be exercised when Tetavax is administered to a nursing woman.
Considering the experimental and clinical data currently available, the vaccine may be prescribed at any stage of pregnancy.
Adverse Reactions
Based on spontaneous reporting, the following adverse events have been reported during the commercial use of TETAVAX. These events have been very rarely (< 0.01%) reported, however exact incidence rates cannot precisely be calculated.
Blood and lymphatic system disorders: Lymphadenopathy.
Immune system disorders: Type I hypersensitivity reactions.
Nervous system disorders: Cephalalgia, dizziness.
Vascular disorders: Hypotension (within a context of reaction of type I hypersensitivity).
Skin and subcutaneous tissue disorders: Allergic-like symptoms, such as urticaria, generalized pruritus, or erythema.
Musculoskeletal and connective tissue disorders: Myalgia, arthralgia.
General disorders and administration site condition: Injection site reactions such as pain, rash, induration or oedema, which can occur within 48 hours and persist for one of two days. A subcutaneous nodule can sometimes accompany these reactions. Cases of aseptic abscesses have exceptionally been reported. The incidence and severity of local reactions may be influenced by the site, the method and route of administration as well as by the number of previous doses received.
Transient pyrexia.
Malaise.
All these reactions have been observed more frequently in hyper immunized subjects; particularly in the case of over-frequent boosters.
Potential adverse events (i.e., adverse events which have not been reported directly with Tetavax, but with other vaccines containing one or more of the antigenic constituents of TETAVAX): Neurological disorders resulting from a vaccination against diphtheria and/or tetanus are extremely rare and no causal relationship has been clearly demonstrated.
Brachial neuritis and Guillain Barré Syndrome after administration of a tetanus toxoid containing vaccine.
Apnoea in very premature infants (born ≤ 28 weeks of gestation) (see Precautions). As this vaccine contains thiomersal (an organomercuric compound) as preservative, hypersensitivity reactions may occur (Refer to contraindications).
View ADR Monitoring Form
Drug Interactions
No contraindication to the administration of this vaccine during a vaccination session with other common vaccines using different sites has been reported.
Caution For Usage
Special Precautions for Disposal and Other Handling: Shake before injection, until a homogenous suspension is obtained.
Any unused product or waste material should be disposed of in accordance with local requirements.
Incompatibilities: As no compatibility studies are available, this medicinal product must not be mixed with other medicinal products.
Storage
Store between 2-8°C (in a refrigerator). Do not freeze.
Shelf-Life: 3 years.
After opening: The product should be used immediately.
MIMS Class
Vaccines, Antisera & Immunologicals
ATC Classification
J07AM01 - tetanus toxoid ; Belongs to the class of tetanus bacterial vaccines.