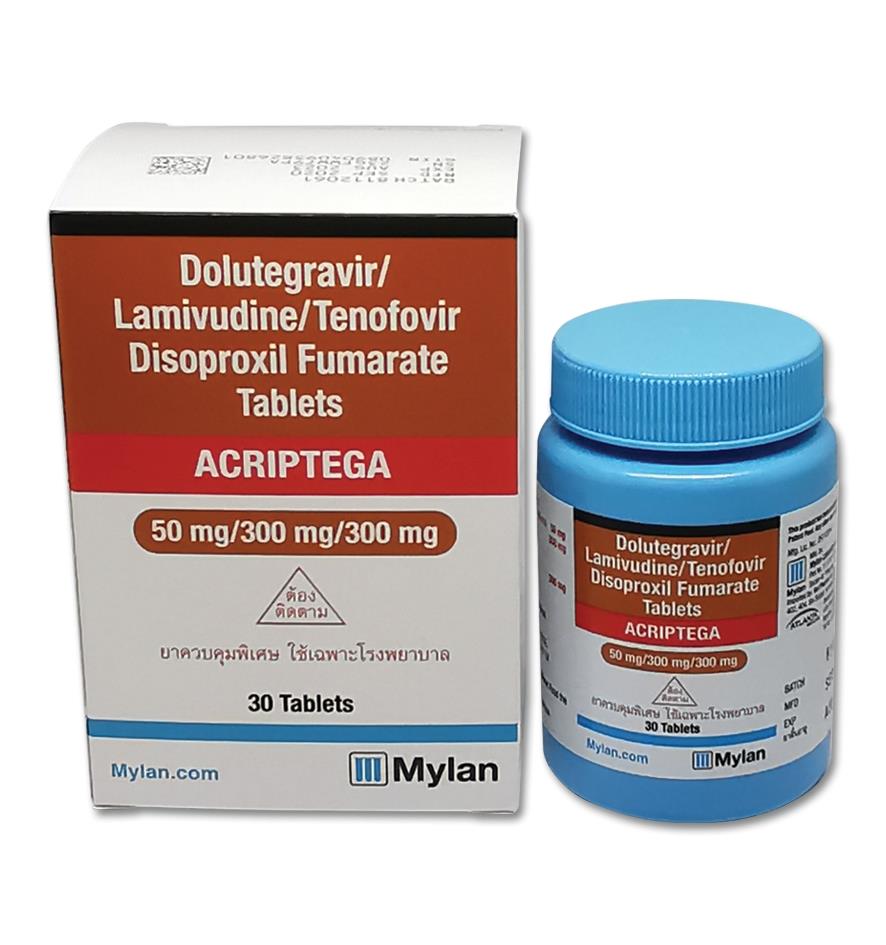 Description of selected adverse reactions: Changes in laboratory biochemistries: Increases in serum creatinine occurred within the first week of treatment with dolutegravir and remained stable through 48 weeks. A mean change from baseline of 9.96 μmol/L was observed after 48 weeks of treatment. Creatinine increases were comparable by various background regimens. These changes are not considered to be clinically relevant since they do not reflect a change in glomerular filtration rate.
Co-infection with Hepatitis B or C: In Phase III studies patients with hepatitis B and/or C co-infection were permitted to enroll provided that baseline liver chemistry tests did not exceed 5 times the upper limit of normal (ULN). Overall, the safety profile in patients co-infected with hepatitis B and/or C was similar to that observed in patients without hepatitis B or C co-infection, although the rates of AST and ALT abnormalities were higher in the subgroup with hepatitis B and/or C co-infection for all treatment groups. Liver chemistry elevations consistent with immune reconstitution syndrome were observed in some subjects with hepatitis B and/or C co-infection at the start of dolutegravir therapy, particularly in those whose anti-hepatitis B therapy was withdrawn (see Precautions).
Immune response syndrome: In HIV-infected patients with severe immune deficiency at the time of initiation of combination antiretroviral therapy (CART), an inflammatory reaction to asymptomatic or residual opportunistic infections may arise. Autoimmune disorders (such as Graves' disease) have also been reported; however, the reported time to onset is more variable and these events can occur many months after initiation of treatment (see Precautions).
Paediatric population: Based on limited available data in adolescents (12 to less than 18 years of age and weighing at least 40 kg), there were no additional types of adverse reactions beyond those observed in the adult population.
Reporting of suspected adverse reactions: Reporting suspected adverse reactions after authorisation of the medicinal product is important. It allows continued monitoring of the benefit/risk balance of the medicinal product. Healthcare professionals are asked to report any suspected adverse reactions via the national reporting system.
View ADR Monitoring Form
Drug Interactions
Interactions relevant to lamivudine: Co-administration with trimethoprim / sulfamethoxazole results in a 40% increase in lamivudine area under the concentration curve. No dose adjustment of Dolutegravir (as sodium)/Lamivudine/Tenofovir Disoproxil Fumarate 50mg/300mg/300mg Tablets is necessary. Lamivudine has no effect on the pharmacokinetics of trimethoprim or sulfamethoxazole.
Interactions relevant to tenofovir: Didanosine: Co-administration of tenofovir disoproxil fumarate and didanosine is not recommended (see Precautions and Table 4).
Renally eliminated medicinal products: Since tenofovir is primarily eliminated by the kidneys, co-administration of tenofovir disoproxil fumarate with medicinal products that reduce renal function or compete for active tubular secretion via transport proteins hOAT 1, hOAT 3 or MRP 4 (e.g. cidofovir) may increase serum concentrations of tenofovir and/or the co-administered medicinal products.
Tenofovir disoproxil fumarate should be avoided with concurrent use of a nephrotoxic medicinal product, such as aminoglycosides, amphotericin B, foscarnet, ganciclovir, pentamidine, vancomycin, cidofovir or interleukin-2 (see Precautions).
Given that tacrolimus can affect renal function, close monitoring is recommended when it is co-administered with tenofovir disoproxil fumarate.
Other interactions: Interactions between Lamivudine/Tenofovir Disoproxil Fumarate 300mg/300mg and HIV protease inhibitors, as well as antiviral agents other than protease inhibitors, are listed in Table below (increased exposure is indicated as "↑", decreased exposure as "↓", no change as "↔", twice daily as "b.i.d.", and once daily as "q.d."). (See Table 4.)

Paediatric population: Interaction studies have only been performed in adults.
Caution For Usage
Instructions for use and handling and disposal: No special requirements.
Incompatibilities: Not applicable.
Storage
Special precautions for storage: Do not store above 30°C. Store in the original container.
Shelf life: 24 months.
MIMS Class
Antivirals
ATC Classification
J05AR27 - lamivudine, tenofovir disoproxil and dolutegravir ; Belongs to the class of antivirals for treatment of HIV infections, combinations.

Thai FDA Category
S
Presentation/Packing
FC tab (white to off-white, film coated, capsule shaped, biconvex, beveled edge tablet debossed with M on one side and LTD on the other side of the tablet) 30's.