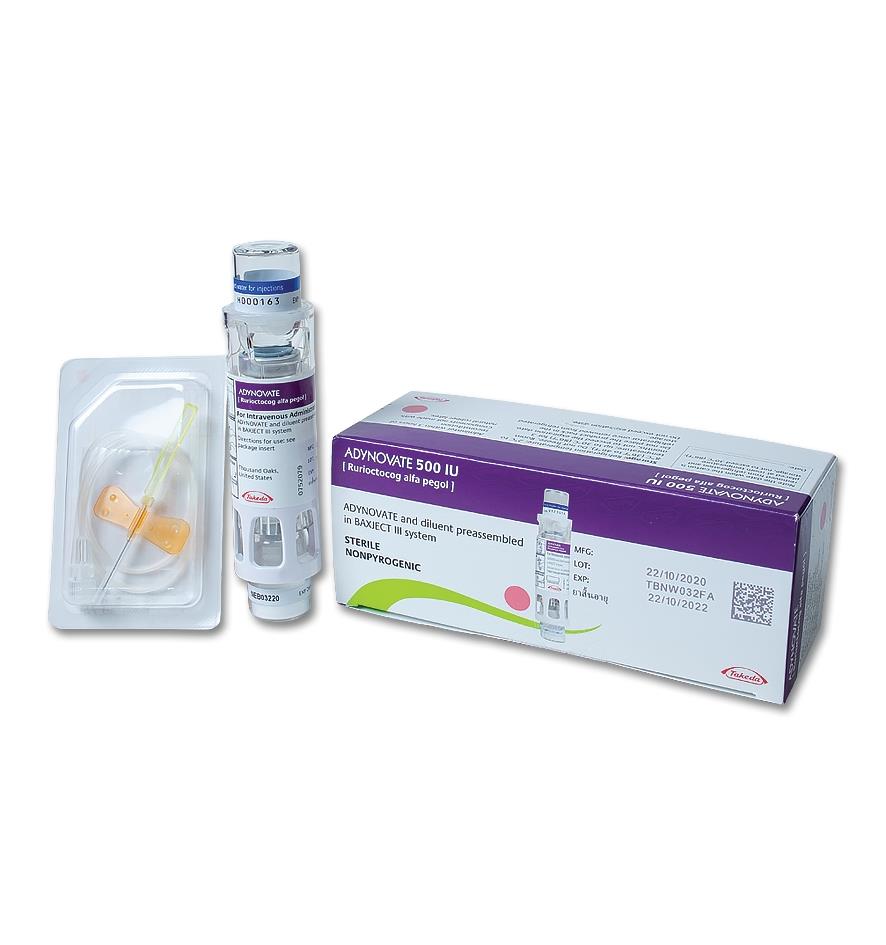 Toxicology: Preclinical safety data: In the repeat dose toxicity study in Cynomologous monkey, two animals showed vacuolation in the kidney in the mid dose group (350 IU/kg). The vacuolations did not recover after 2 weeks. The human relevance of kidney vacuolation observed in the preclinical study is unknown.
Nonclinical data are limited to 1 month exposure and no studies in juvenile animals were conducted with ADYNOVATE. Thus it was not possible to conclude on the potential risks of PEG accumulation in various tissues/organs relevant for chronic use of ADYNOVATE in the paediatric population. No studies on genotoxicity, carcinogenicity or reproductive toxicity have been performed with ADYNOVATE.
Indications/Uses
Treatment and prophylaxis of bleeding in patients 12 years and above with haemophilia A (congenital factor VIII deficiency).
Dosage/Direction for Use
Treatment should be under the supervision of a physician experienced in the treatment of haemophilia.
Previously untreated patients: The safety and efficacy of ADYNOVATE in previously untreated patients have not yet been established. No data are available.
Treatment monitoring: During the course of treatment, appropriate determination of factor VIII levels is advised to guide the dose to be administered and the frequency of repeated infusions. Individual patients may vary in their response to factor VIII, demonstrating different half-lives and recoveries. Dose based on bodyweight may require adjustment in underweight or overweight patients. In the case of major surgical interventions in particular, precise monitoring of the substitution therapy by means of coagulation analysis (plasma factor VIII activity) is indispensable.
A field study has indicated that plasma factor VIII levels can be monitored using either a chromogenic substrate assay or a one stage clotting assay routinely used in clinical laboratories.
Posology: The dose and duration of the substitution therapy depend on the severity of the factor VIII deficiency, on the location and extent of the bleeding and on the patient's clinical condition.
The number of units of factor VIII administered is expressed in International Units (IU), which are related to the current WHO concentrate standard for factor VIII products. Factor VIII activity in plasma is expressed either as a percentage (relative to normal human plasma) or preferably in International Units (relative to an International Standard for factor VIII in plasma).
One International Unit (IU) of factor VIII activity is equivalent to that quantity of factor VIII in one ml of normal human plasma.
On demand treatment: The calculation of the required dose of factor VIII is based on the empirical finding that 1 IU factor VIII per kg body weight raises the plasma factor VIII activity by 2 IU/dl. The required dose is determined using the following formula: Required international units (IU) = body weight (kg) x desired factor VIII rise (%) x 0.5.
The amount to be administered and the frequency of administration should always be oriented to the clinical effectiveness in the individual case.
In the case of the following haemorrhagic events, factor VIII activity should not fall below the given plasma activity level (in % of normal or IU/dl) in the corresponding period.
The following Table 2 can be used to guide dosing in bleeding episodes and surgery: See Table 2.