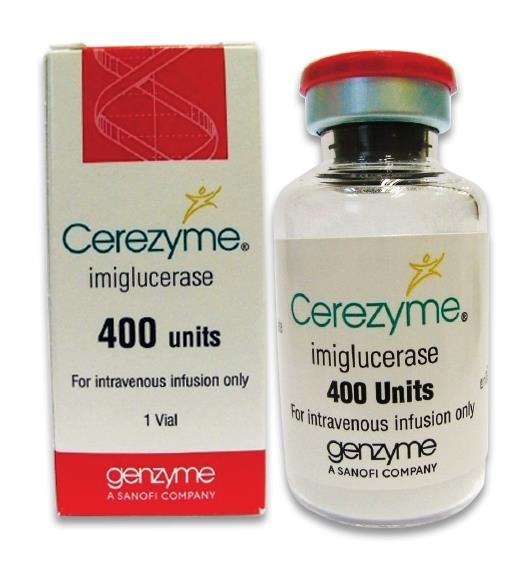 An enzyme unit (U) is defined as the amount of enzyme that catalyzes the hydrolysis of 1 micromole of the synthetic substrate para-nitrophenyl-β-D-glucopyranoside (pNP-Glc)/min at 37°C. After reconstitution with sterile water for injection, the imiglucerase concentration is 40 U/mL (see Dosage & Administration). Reconstituted solutions have a pH of approximately 6.1.
Action
Pharmacology: Pharmacodynamics: Mechanism of Action: Gaucher disease is characterized by a deficiency of β-glucocerebrosidase activity, resulting in accumulation of glucocerebroside in tissue macrophages which become engorged and are typically found in the liver, spleen, bone marrow and occasionally, in lung, kidney and intestine. Secondary hematologic sequelae include severe anemia and thrombocytopenia in addition to the characteristic progressive hepatosplenomegaly, skeletal complications, including osteonecrosis and osteopenia with secondary pathological fractures. Cerezyme catalyzes the hydrolysis of glucocerebroside to glucose and ceramide. In clinical trials, Cerezyme improved anemia and thrombocytopenia, reduced spleen and liver size and decreased cachexia to a degree similar to that observed with Ceredase.
Pharmakokinetics: During 1-hr IV infusions of 4 doses (7.5, 15, 30, 60 U/kg) of Cerezyme, steady-state enzymatic activity was achieved by 30 min. Following infusion, plasma enzymatic activity declined rapidly with a half-life ranging from 3.6-10.4 min. Plasma clearance ranged from 9.8-20.3 mL/min/kg (mean±SD, 14.5±4 mL/min/kg). The volume of distribution corrected for weight ranged from 0.09-0.15 L/kg (0.12±0.02 L/kg). These variables do not appear to be influenced by dose or duration of infusion. However, only 1 or 2 patients were studied at each dose level and infusion rate. The pharmacokinetics of Cerezyme do not appear to be different from placental-derived aglucerase (Ceredase).
In patients who developed immunoglobulin G (IgG) antibody to Cerezyme, an apparent effect on serum enzyme levels resulted in diminished volume of distribution and clearance and increased elimination half-life compared to patients without antibody (see Warnings).
Indications/Uses
For long-term enzyme replacement therapy for pediatric and adult patients with a confirmed diagnosis of non-neuronopathic (type 1) or chronic neuronopathic (type 3) Gaucher disease and who exhibit ≥1 of the following clinically significant non-neurological manifestations of the disease: Anemia, thrombocytopenia, bone disease, hepatomegaly or splenomegaly.
Dosage/Direction for Use
Cerezyme is administered by IV infusion over 1-2 hrs. Dosage should be individualized to each patient. Initial dosages range from 2.5 U/kg of body weight 3 times a week to 60 U/kg once every 2 weeks. Sixty (60) U/kg every 2 weeks is the dosage for which the most data are available. Disease severity may dictate that treatment be initiated at a relatively high-dose or relatively frequent administration. Dosage adjustments should be made on an individual basis and may increase or decrease, based on achievement of therapeutic goals as assessed by routine comprehensive evaluations of the patient's clinical manifestations.
After reconstitution, Cerezyme should be inspected visually before use. Because this is a protein solution, slight flocculation (described as thin translucent fibers) occurs occasionally after dilution. The diluted solution may be filtered through an in-line low protein-binding 0.2 micrometer filter during administration. Any vials exhibiting opaque particles or discoloration should not be used.
On the day of use, after the correct amount of Cerezyme to be administered to the patient has been determined, the appropriate number of vials are each reconstituted with sterile water for injection. The final concentrations and administration volumes are provided in Table 2. (See Table 2.)