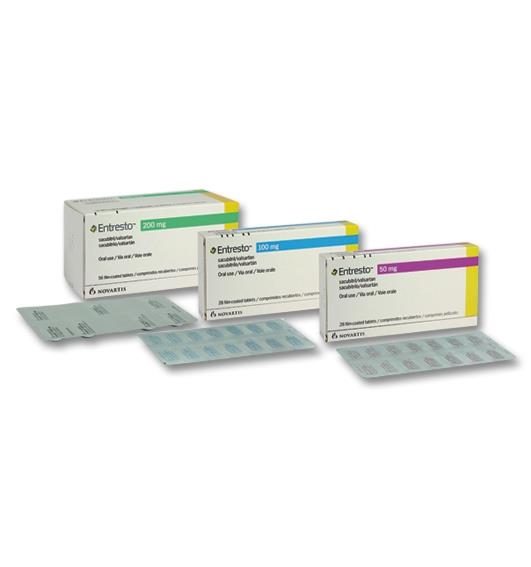 The Kaplan-Meier presented in the figure as follows (left) shows time to first occurrence of the primary composite endpoint of CV death or heart failure hospitalization. Entresto treatment effect was evident early and sustained for the duration of the study. The Kaplan-Meier figure presented as follows (right) shows the time to CV death endpoint. (See Figure.)

View ADR Monitoring Form
Drug Interactions
Anticipated Interactions Resulting in a Contraindication: ACE Inhibitors: The concomitant use of Entresto with ACE inhibitors is contraindicated, as the concomitant inhibition of neprilysin (NEP) and ACE inhibitor therapy may increase the risk of angioedema. Entresto must not be started until 36 hours after taking the last dose of ACE inhibitor therapy. ACE inhibitor therapy must not be started until 36 hours after the last dose of Entresto (see Contraindications, and Dosage & Administration).
Aliskiren: The concomitant use of Entresto with aliskiren is contraindicated in patients with Type 2 diabetes (see Contraindications).
Anticipated Interactions Resulting in Concomitant Use Not Being Recommended: Entresto should not be co-administered with an ARB due to the angiotensin II receptor blocking activity of Entresto (see Precautions).
Concomitant use with aliskiren should be avoided in patients with renal impairment (eGFR <60 mL/min/1.73 m2) (see Precautions).
Observed Interactions to be Considered: Statins: In vitro data indicates that sacubitril inhibits OATP1B1 and OATP1B3 transporters. Entresto may therefore increase the systemic exposure of OATP1B1 and OATP1B3 substrates such as statins. Co-administration of Entresto increased the Cmax of atorvastatin and its metabolites by up to 2-fold and AUC by up to 1.3-fold.
Caution should be exercised upon co-administration of Entresto with statins. No clinically relevant drug-drug interaction was observed when simvastatin and Entresto were co-administered.
Sildenafil: Addition of a single dose of sildenafil to Entresto at steady state in patients with hypertension was associated with greater BP reduction compared to administration of Entresto alone. Therefore, caution should be exercised when sildenafil or another PDE-5 inhibitor is initiated in patients treated with Entresto.
Anticipated Interactions to be Considered: Potassium: Concomitant use of potassium-sparing diuretics (e.g, triamterene, amiloride), mineralocorticoid antagonists (e.g. spironolactone, eplerenone), potassium supplements, or salt substitutes containing potassium may lead to increases in serum potassium, and to increases in serum creatinine. Monitoring of serum potassium is recommended if Entresto is co-administered with these agents (see Precautions).
Non-Steroidal Anti-Inflammatory Agents (NSAIDs) including selective cyclooxygenase-2 inhibitors (COX-2 Inhibitors): In elderly patients, volume-depleted patients (including those on diuretic therapy), or patients with compromised renal function, concomitant use of Entresto and NSAIDs may lead to an increased risk of worsening of renal function. Therefore, monitoring of renal function is recommended when initiating or modifying the treatment in patients on Entresto who are taking NSAIDs concomitantly.
Lithium: The potential for a drug interaction between Entresto and lithium has not been investigated. Reversible increases in serum lithium concentrations and toxicity have been reported during concomitant administration of lithium with ACE inhibitors or angiotensin II receptor antagonists. Therefore, careful monitoring of serum lithium levels is recommended during concomitant use with Entresto. If a diuretic is also used, the risk of lithium toxicity may be increased further.
Transporters: The active metabolite of sacubitril (LBQ657), and valsartan are OATP1B1, OATP1B3 and OAT3 substrates; valsartan is also a MRP2 substrate. Therefore, co-administration of Entresto with inhibitors of OATP1B1, OATP1B3, OAT3 (e.g. rifampin, cyclosporine) or MRP2 (e.g. ritonavir) may increase the systemic exposure to LBQ657 or valsartan, respectively. Exercise appropriate care when initiating or ending concomitant treatment with such drugs.
No Significant Interactions: No clinically meaningful drug-drug interaction was observed upon co-administration of Entresto and furosemide, digoxin, warfarin, hydrochlorothiazide, amlodipine, metformin, omeprazole, carvedilol, intravenous nitroglycerin or a combination of levonorgestrel/ethinyl estradiol. No interaction is expected with atenolol, indomethacin, glyburide, or cimetidine.
CYP 450 Interactions: In vitro metabolism studies indicate that the potential for CYP 450-based drug interactions is low since there is limited metabolism of Entresto via the CYP450 enzymes. Entresto does not induce or inhibit CYP450 enzymes.
Caution For Usage
Incompatibilities: Not applicable.
Instructions for Use and Handling: Not applicable.
Storage
Do not store above 30°C, protect from moisture.
MIMS Class
Other Cardiovascular Drugs
ATC Classification
C09DX04 - valsartan and sacubitril ; Belongs to the class of angiotensin II receptor blockers (ARBs), other combinations. Used in the treatment of cardiovascular disease.