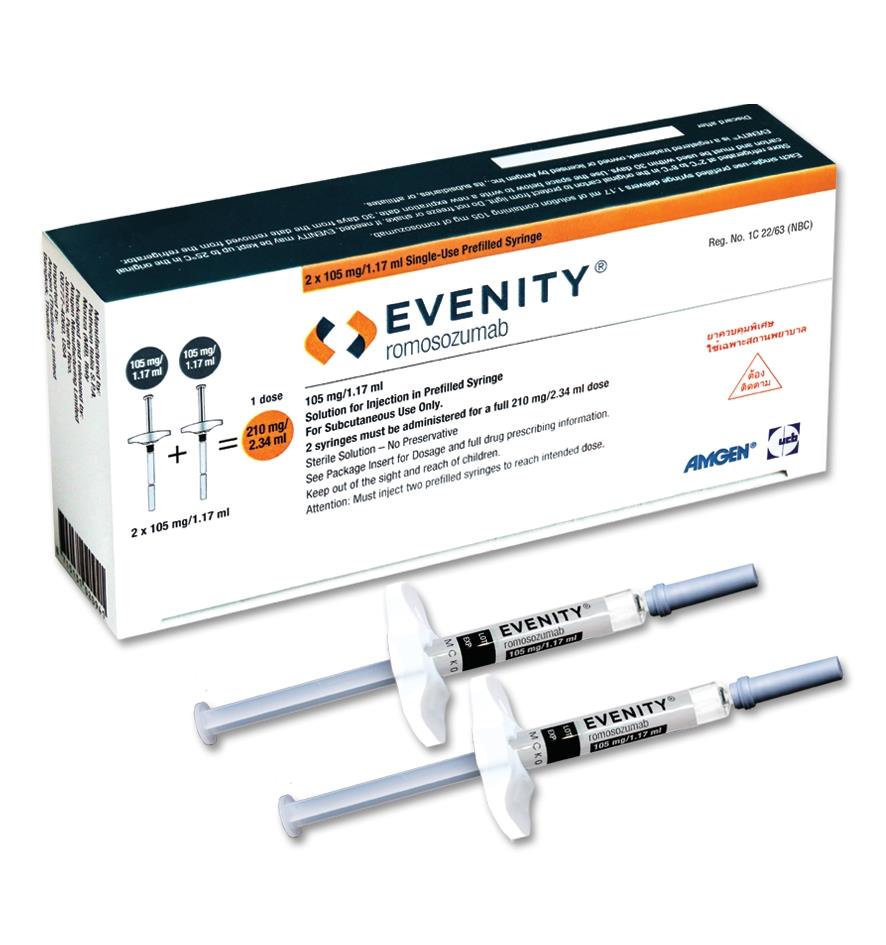 Concise Prescribing Info Full Prescribing Info Contents Description Action Indications/Uses Dosage/Direction for Use Overdosage Contraindications Warnings Special Precautions Use In Pregnancy & Lactation Adverse Reactions Drug Interactions Storage MIMS Class ATC Classification Thai FDA Category Presentation/Packing
Full Prescribing Info
Contents
Romosozumab.
Description
Romosozumab is a humanized monoclonal antibody (IgG2) produced in a mammalian cell line (Chinese Hamster Ovary) by recombinant DNA technology that binds to and inhibits sclerostin. Romosozumab has an approximate molecular weight of 149 kDa.
Two 105 mg/1.17 mL single-use prefilled syringes are required to administer the recommended 210 mg dose of EVENITY [see Important Dosage and Administration Instructions under Dosage & Administration]. Each single-use prefilled syringe delivers 1.17 mL of solution containing 105 mg of romosozumab, acetate (3.8 mg), calcium (0.61 mg), polysorbate 20 (0.07 mg) and sucrose (70 mg) in Water for Injection, USP, and sodium hydroxide to a pH of 5.2.
Action
Pharmacology: Mechanism of Action: EVENITY inhibits the action of sclerostin, a regulatory factor in bone metabolism. EVENITY increases bone formation and, to a lesser extent, decreases bone resorption. Animal studies showed that romosozumab stimulates new bone formation on trabecular and endocortical bone surfaces by stimulating osteoblastic activity resulting in increases in trabecular and cortical bone mass and improvements in bone structure and strength [see Nonclinical Toxicology and Clinical Studies as follows].
Pharmacodynamics: In postmenopausal women with osteoporosis, EVENITY increased the bone formation marker procollagen type 1 N-telopeptide (P1NP) with a peak increase from baseline of approximately 145% compared to placebo 2 weeks after initiating treatment, followed by a return to concentrations seen with placebo at month 9 and a decline from baseline to approximately 15% below the concentration change seen with placebo at month 12.
EVENITY decreased the bone resorption marker type 1 collagen C-telopeptide (CTX) with a maximal reduction from baseline of approximately 55% compared to placebo 2 weeks after initiating treatment.
CTX remained below concentrations seen with placebo and was approximately 25% below the concentration change seen with placebo at month 12.
After discontinuation of EVENITY, P1NP levels returned to baseline within 12 months; CTX increased above baseline levels within 3 months and returned toward baseline levels by month 12.
Clinical Studies:Treatment of Osteoporosis in Postmenopausal Women: Study 1 (NCT01575834) was a randomized, double-blind, placebo-controlled study of postmenopausal women aged 55 to 90 years (mean age of 71 years) with bone mineral density (BMD) T-score less than or equal to -2.5 at the total hip or femoral neck. Women were randomized to receive subcutaneous injections of either EVENITY (N = 3589) or placebo (N = 3591) for 12 months. At baseline, 18% of women had a vertebral fracture. After the 12-month treatment period, women in both arms transitioned to open-label anti-resorptive therapy (denosumab) for 12 months while remaining blinded to their initial treatment. Women received 500 to 1000 mg calcium and 600 to 800 international units vitamin D supplementation daily. The coprimary efficacy endpoints were new vertebral fracture at month 12 and month 24.
Effect on Fractures: EVENITY significantly reduced the incidence of new vertebral fractures through month 12 compared to placebo. In addition, the significant reduction in fracture risk persisted through the second year in women who received EVENITY during the first year and transitioned to denosumab compared to those who transitioned from placebo to denosumab (see Table 1).

EVENITY significantly reduced the incidence of clinical fracture (a composite endpoint of symptomatic vertebral fracture and nonvertebral fracture) at 12 months. However, 88% of these clinical fractures were nonvertebral fractures and the incidence of nonvertebral fractures was not statistically significantly different when comparing EVENITY-treated women to placebo-treated women at month 12 or month 24.
Effect on BMD: EVENITY significantly increased BMD at the lumbar spine, total hip, and femoral neck compared with placebo at month 12. The treatment differences in BMD were 12.7% at the lumbar spine, 5.8% at the total hip, and 5.2% at the femoral neck.
Following the transition from EVENITY to denosumab at month 12, BMD continued to increase through month 24. In patients who transitioned from placebo to denosumab, BMD also increased with denosumab use. The differences in BMD achieved at month 12 between EVENITY and placebo patients were overall maintained at month 24, when comparing patients who transitioned from EVENITY to denosumab to those who transitioned from placebo to denosumab. There was no evidence of differences in effects on BMD at the lumbar spine or total hip across subgroups defined by baseline age, baseline BMD, or geographic region.
After EVENITY discontinuation, BMD returns to approximately baseline levels within 12 months in the absence of follow-on anti-resorptive therapy [see Indications/Uses].
Bone Histology and Histomorphometry: A total of 154 transiliac crest bone biopsy specimens were obtained from 139 postmenopausal women with osteoporosis at month 2, month 12, and/or month 24. All of these biopsies were adequate for qualitative histology and 138 (90%) were adequate for full quantitative histomorphometry assessment.
Qualitative histology assessments from women treated with EVENITY showed normal bone architecture and quality at all time points. There was no evidence of woven bone, mineralization defects, or marrow fibrosis.
Histomorphometry assessments on biopsies at months 2 and 12 compared the effect of EVENITY with placebo (15 specimens at month 2 and 39 specimens at month 12 in the EVENITY group, 14 specimens at month 2 and 31 specimens at month 12 in the placebo group). At month 2 in women treated with EVENITY, histomorphometric indices of bone formation at trabecular and endocortical surfaces were increased. These effects on bone formation were accompanied by a decrease in indices of bone resorption.
At month 12, both bone formation and resorption indices were decreased with EVENITY, while bone volume, and trabecular and cortical thickness were increased.
Study 2 (NCT01631214) was a randomized, double-blind, alendronate-controlled study of postmenopausal women aged 55 to 90 years (mean age of 74 years) with BMD T-score less than or equal to -2.5 at the total hip or femoral neck and either one moderate or severe vertebral fracture or two mild vertebral fractures, or BMD T-score less than or equal to -2.0 at the total hip or femoral neck and either two moderate or severe vertebral fractures or a history of a proximal femur fracture. Women were randomized (1:1) to receive either monthly subcutaneous injections of EVENITY (N = 2046) or oral alendronate 70 mg weekly (N = 2047) for 12 months, with 500 to 1000 mg calcium and 600 to 800 international units vitamin D supplementation daily. After the 12-month treatment period, women in both arms transitioned to open-label alendronate 70 mg weekly while remaining blinded to their initial treatment.
This was an event-driven trial. The coprimary efficacy endpoints were the incidence of morphometric vertebral fracture at 24 months and time to the first clinical fracture through the primary analysis period, which ended when at least 330 subjects had a clinical fracture and all subjects had completed the 24-month visit. Clinical fracture was a composite endpoint of nonvertebral fracture and symptomatic vertebral fracture.
Effect on Fractures: EVENITY significantly reduced the incidence of new vertebral fracture at 24 months (see Table 2).