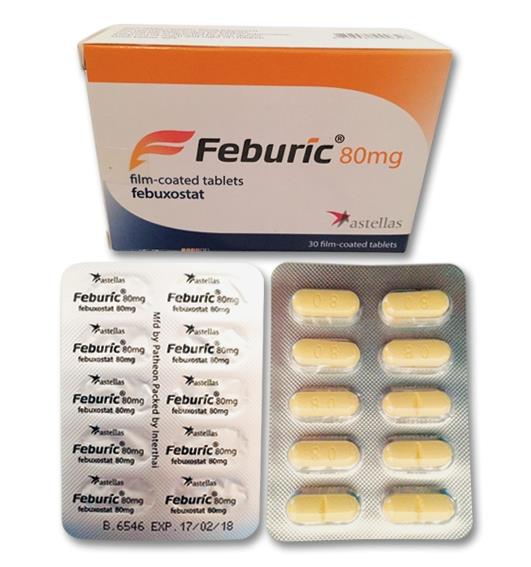 Description of selected adverse reactions: Rare serious hypersensitivity reactions to febuxostat, including Stevens-Johnson syndrome, Toxic epidermal necrolysis and anaphylactic reaction/shock, have occurred in the post-marketing experience. Stevens-Johnson syndrome and Toxic epidermal necrolysis are characterised by progressive skin rashes associated with blisters or mucosal lesions and eye irritation. Hypersensitivity reactions to febuxostat can be associated to the following symptoms: skin reactions characterised by infiltrated maculopapular eruption, generalised or exfoliative rashes, but also skin lesions, facial oedema, fever, haematologic abnormalities such as thrombocytopenia and eosinophilia, and single or multiple organ involvement (liver and kidney including tubulointerstitial nephritis) (see Precautions).
Gout flares were commonly observed soon after the start of treatment and during the first months. Thereafter, the frequency of gout flare decreases in a time-dependent manner. Gout flare prophylaxis is recommended (see Dosage & Administration and Precautions).
Tumor Lysis Syndrome: Summary of the safety profile: In the randomized, double-blind, Phase 3 pivotal FLORENCE (FLO-01) study comparing febuxostat with allopurinol (346 patients undergoing chemotherapy for haematologic malignancies and at intermediate-to-high risk of TLS), only 22 (6.4%) patients overall experienced adverse reactions, namely 11 (6.4%) patients in each treatment group. The majority of adverse reactions were either mild or moderate.
Overall, the FLORENCE trial did not highlight any particular safety concern in addition to the previous experience with febuxostat in gout, with the exception of the following three adverse reactions (listed in previously shown table 2).
Cardiac disorders: Uncommon: Left bundle branch block, sinus tachycardia.
Vascular disorders: Uncommon: haemorrhage.
Reporting of suspected adverse reactions: Reporting suspected adverse reactions after authorisation of the medicinal product is important. It allows continued monitoring of the benefit/risk balance of the medicinal product. Healthcare professionals are asked to report any suspected adverse reactions.
View ADR Monitoring Form
Drug Interactions
Mercaptopurine/azathioprine: On the basis of the mechanism of action of febuxostat on XO inhibition concomitant use is not recommended. Inhibition of XO by febuxostat may cause increased plasma concentrations of these drugs leading to toxicity (see Precautions). Drug interaction studies of febuxostat with drugs that are metabolized by XO have not been performed.
Drug interaction studies of febuxostat with cytotoxic chemotherapy have not been conducted. In the Tumor Lysis Syndrome pivotal trial febuxostat 120 mg daily was administered to patients undergoing several chemotherapy regimens, including monoclonal antibodies. However, drug-drug and drug-disease interactions were not explored during this study. Therefore, possible interactions with any concomitantly administered cytotoxic drug cannot be ruled out.
Rosiglitazone/CYP2C8 substrates: Febuxostat was shown to be a weak inhibitor of CYP2C8 in vitro. In a study in healthy subjects, coadministration of 120 mg febuxostat QD with a single 4 mg oral dose of rosiglitazone had no effect on the pharmacokinetics of rosiglitazone and its metabolite N-desmethyl rosiglitazone, indicating that febuxostat is not a CYP2C8 enzyme inhibitor in vivo. Thus, co-administration of febuxostat with rosiglitazone or other CYP2C8 substrates is not expected to require any dose adjustment for those compounds.
Theophylline: An interaction study in healthy subjects has been performed with febuxostat to evaluate whether the inhibition of XO may cause an increase in the theophylline circulating levels as reported with other XO inhibitors. The result of the study showed that the co-administration of febuxostat 80 mg QD with theophylline 400 mg single dose has no effect on the pharmacokinetics or safety of theophylline. Therefore no special caution is advised when febuxostat 80 mg and theophylline are given concomitantly. No data is available for febuxostat 120 mg.
Naproxen and other inhibitors of glucuronidation: Febuxostat metabolism depends on Uridine Glucuronosyl Transferase (UGT) enzymes. Medicinal products that inhibit glucuronidation, such as NSAIDs and probenecid, could in theory affect the elimination of febuxostat. In healthy subjects concomitant use of febuxostat and naproxen 250 mg twice daily was associated with an increase in febuxostat exposure (Cmax 28%, AUC 41% and t½ 26%). In clinical studies the use of naproxen or other NSAIDs/Cox-2 inhibitors was not related to any clinically significant increase in adverse events.
Febuxostat can be co-administered with naproxen with no dose adjustment of febuxostat or naproxen being necessary.
Inducers of glucuronidation: Potent inducers of UGT enzymes might possibly lead to increased metabolism and decreased efficacy of febuxostat. Monitoring of serum uric acid is therefore recommended 1-2 weeks after start of treatment with a potent inducer of glucuronidation. Conversely, cessation of treatment of an inducer might lead to increased plasma levels of febuxostat.
Colchicine/indomethacin/hydrochlorothiazide/warfarin: Febuxostat can be co-administered with colchicine or indomethacin with no dose adjustment of febuxostat or the co-administered active substance being necessary.
No dose adjustment is necessary for febuxostat when administered with hydrochlorothiazide.
No dose adjustment is necessary for warfarin when administered with febuxostat. Administration of febuxostat (80 mg or 120 mg once daily) with warfarin had no effect on the pharmacokinetics of warfarin in healthy subjects. INR and Factor VII activity were also not affected by the co-administration of febuxostat.
Desipramine/CYP2D6 substrates: Febuxostat was shown to be a weak inhibitor of CYP2D6 in vitro. In a study in healthy subjects, 120 mg febuxostat QD resulted in a mean 22% increase in AUC of desipramine, a CYP2D6 substrate indicating a potential weak inhibitory effect of febuxostat on the CYP2D6 enzyme in vivo. Thus, co-administration of febuxostat with other CYP2D6 substrates is not expected to require any dose adjustment for those compounds.
Antacids: Concomitant ingestion of an antacid containing magnesium hydroxide and aluminium hydroxide has been shown to delay absorption of febuxostat (approximately 1 hour) and to cause a 32% decrease in Cmax, but no significant change in AUC was observed. Therefore, febuxostat may be taken without regard to antacid use.
Caution For Usage
Incompatibilities: Not applicable.
Special precautions for disposal: No special requirements.
Storage
Store below 30°C.
MIMS Class
Hyperuricemia & Gout Preparations
ATC Classification
M04AA03 - febuxostat ; Belongs to the class of preparations inhibiting uric acid production. Used in the treatment of gout.

Thai FDA Category
D
Presentation/Packing
FC tab 80 mg (pale yellow to yellow rectangle with a break line on one side and "80" engraved on the other side) x 30's.