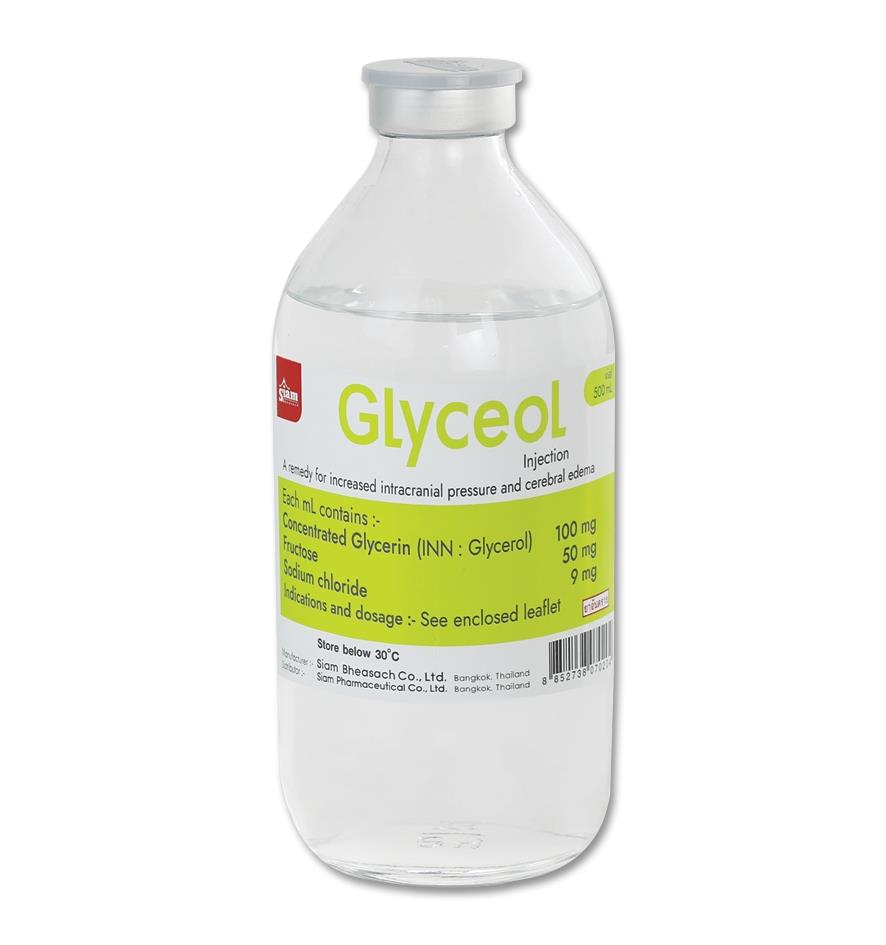 Concise Prescribing Info Full Prescribing Info Contents Description Action Indications/Uses Dosage/Direction for Use Contraindications Special Precautions Side Effects Storage MIMS Class ATC Classification Thai FDA Category Presentation/Packing
Full Prescribing Info
Contents
Glycerin, fructose, sodium chloride.
Description
Each mL of GLYCEOL INJECTION contains the following ingredients: Conc. Glycerin (INN : Glycerol) 100 mg, Fructose 50 mg, Sodium chloride* 9 mg.
* in a concentration of 0.9% w/v, refer to "Precautions".
Form of presentation: A colorless clear solution contained in colorless transparent vials.
pH: 3.0-6.0.
Relative osmotic pressure (to physiological saline): approximately 7.
Action
Stroke (e.g. cerebral infarction, intracerebral hemorrhage and subarachnoid hemorrhage) and CNS disorders (such as brain tumor and head injury), in their acute stage, are often accompanied by increased intracranial pressure and cerebral edema. It is of utmost therapeutic importance to take effective and appropriate measures against these changes in initial stages after their onset and throughout their subsequent course.
GLYCEOL INJECTION is a compound preparation of Glycerin and Fructose intended for use in the management of increased intracranial pressure and cerebral edema.
Studies have shown that the drug provides both a direct hyperosmotic dehydrating action and an indirect brain metabolism-improving action of Glycerin (this compound, after being introduced into the body, is utilized as a source of energy and enters the process of brain metabolism to act as an accelerator of metabolism) and thereby produces prompt effects of lowering intracranial pressure, reducing brain edema and improving cerebral blood flow. Its clinical effectiveness in alleviating symptoms, both subjective and objective, as well as in improving EEG has been well documented.
Double blind comparative studies of GLYCEOL INJECTION vs mannitol demonstrated that the drug is quick and potent in its action to lower intracranial pressure, little affects the urinary output, imposes only a light burden upon the kidney and produces a little effect on electrolyte balance.
Pharmacology: Pharmacodynamics: The intravenous administration of Glycerin was followed by a marked fall or cerebrospinal fluid pressure in the cat and rabbit.
Experiments on dogs using epidural balloon and cold-injury methods demonstrated a decrease in the water control of brain, increase in cerebral blood flow and oxygen consumption and improved brain tissue metabolism following the use of the drug.
Measurements of regional cerebral blood flow in humans affected with stroke and cerebral edema showed an increase in blood flow from an ischemic to normal level and re-distribution of blood flow (from congestive to ischemic areas) to occur following the administration of the drug or Glycerin.
Glycerin, when administered to humans affected with stroke and cerebral edema, was found to participate in brain metabolism to bring about a decrease in the brain content of free fatty acids(which are believed to be a factor to impair the generation of energy by brain cells and thus to contribute to the formation of a vicious cycle in the production of brain edema) with a consequent disappearance of slow waves on EEG.
Pharmacokinetics: Metabolism: Whole body autoradiography of rats receiving an IV dose of 14C-glycerin revealed that the specific activity was distributed into almost all tissues of the body. To be noted, however, was that whereas the specific activity quickly disappeared from the circulation and liver, its permeation into and disappearance from the brain were delayed.
Experiments with intravenously administered 14C-glycerin in rats and rabbits demonstrated that 65% of the radioactivity administered is eliminated as 14CO2 in the expired air within 48 hrs after dosing, while Glycerin enters the TCA cycle via glycolytic pathways and is metabolized to carbon dioxide and water while producing ATP 13% and 9% respectively, of the administered dose were recovered in the urine of rat and rabbit, with only an insignificant fraction being excreted in feces in both animal species. In rat, less than 1% of the administered dose was excreted in bile.
Toxicology: Acute toxicity (LD50 values in mL/kg of the preparation): See table.

Subacute and subchronic toxicity: Subacute (rat, 10 mL/kg IP for 1 month) and subchronic (rabbit, 10 mL/kg IV for 3 months) dosage studies with the drug revealed no appreciable abnormalities in growth, hematology, biochemistry, urine and histopathology. Changes produced by the administration of Glycerin were found to be reduced by the concomitant use of Fructose.
Effect on reproduction: In a preliminary experiment (rabbit) the administration of Glycerin at 2-4 g/kg was associated with a high incidence of abortion probably because at these dosage levels the solution to be injected became concentrated and hypertonic enough to exert a significant dehydrating action owing to a restricted volume of solution injectable in such animal species. Hence the maximum dose was set at 1 g/kg and medication was given by intraperitoneal or intravenous route during the period of organogenesis (rat, rabbit), during perinatal and nursing periods (rat) and during a period prior to gestation and an initial period of pregnancy (rat). No unfavorable effect on reproduction was noted, however.
Nephrotoxicity: Seven-day treatment of rabbits with the drug at 10-20 mL/kg twice daily intravenously resulted in no noticeable impairment, both functional and organic, of the kidney. Comparison of the drug and mannitol on an equimolar and equal volume basis in rats with a kanamycin-induced damage to kidneys showed that whereas the drug improved renal function tests and pathological findings of kidneys, mannitol rather deteriorated them.
Hemolytic action: Glycerin, when administered intravenously in rats, gives rise to hemoglobinuria in a dose (or concentration) dependent manner. Basic studies have shown Fructose to prove effective in preventing hemolysis caused by Glycerin. It has been demonstrated further that the hemoglobinuria can effectively be checked at a Glycerin/Fructose ratio of 3 : 1 with a Glycerin concentration of less than 20%. (The safety for use of a Glycerin-Fructose mixture at a ratio of 2 : 1 and at a Glycerin concentration of 10% was definitely proven in clinical studies).
Indications/Uses
For the treatment of increased intracranial pressure and cerebral edema.
Dosage/Direction for Use
Ordinary adult dose is 200-500 mL once or twice daily, each dose being administered by intravenous drip infusion in 2 to 3 hours per 500 mL.
The duration of administration usually is about 1 week.
The dosage may be changed according to age and symptom.
Contraindications
The drug should not be administered to patients with hereditary fructose intolerance.
Special Precautions
General precautions: To those patients who are suspected of having an acute, sub or epidural hematoma the drug should be administered only after an adequate treatment of the source of bleeding and upon confirming that there is no hazard of re-bleeding (since otherwise a fall of intracranial pressure is likely to result in re-bleeding).
Since the drug contains sodium chloride, ample caution should be exercised in prescribing it for those patients in whom restriction of salt intake is indicated.
Care must be taken in administering the drug to patients with the following disorders: Impairment of cardiovascular function; Renal disorder; Diabetes insipidus; Diabetes mellitus (Hyperosmolar nonketotic coma may occur).
Side Effects
Urine: Occasional patients may develop occult blood in urine, hemoglobinuria and hematuria while on the drug using.
Others: The use of the drug may be attended by headache and general malaise.
Storage
Store below 30°C.
MIMS Class
Intravenous & Other Sterile Solutions
ATC Classification
B05BC - Solutions producing osmotic diuresis ; Used in I.V. solutions.