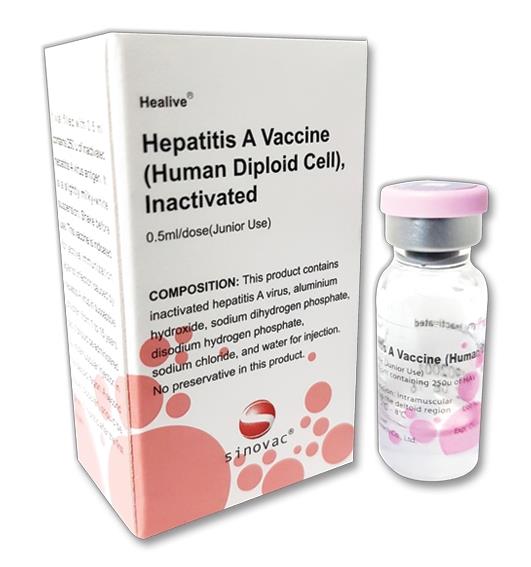 Concise Prescribing Info Full Prescribing Info Contents Description Action Indications/Uses Dosage/Direction for Use Overdosage Contraindications Special Precautions Use In Pregnancy & Lactation Adverse Reactions Drug Interactions Caution For Usage Storage MIMS Class ATC Classification Thai FDA Category Presentation/Packing
The information highlighted (if any) are the most recent updates for this brand.
Full Prescribing Info
Action
Pharmacotherapeutic Group: Viral vaccine, ATC code: J07BC02.
Pharmacology: Pharmacodynamics: Healive confers immunity against hepatitis A virus by inducing antibody titres greater than those obtained after passive immunization with immunoglobulin. Antibody appears shortly after the first injection and 14 days after vaccination 56.7%-93% of immunocompetent subjects are seroprotected (titre above 20 mlU/ml). One month after the first dose, 69.4%-95.5% of subjects have antibody titres above 20 mlU/ml.
The efficacy of Healive was evaluated in different community outbreaks. These studies indicated that administration of a single dose of Healive contributed to termination of the outbreaks. In one study, the peak of HAV outbreak began to decrease in 2 weeks after the primary infection. In another study, the protective efficacy was 100% in students who received vaccination.
In order to ensure long term protection, a booster dose should be given between 6 and 12 months after the primary dose. In clinical trials, virtually all vaccinees were seropositive one month after the booster dose.
The long-term persistence of protective antibody levels to hepatitis A virus after a second dose (booster) of Healive has not been fully evaluated. Nevertheless, serological data show continuing protection against hepatitis A for up to 5 years in subjects who administered after the full immunization.
Pharmacokinetics: Not applicable to vaccine for prophylaxis.
Toxicology: Preclinical Safety Data: Long-term toxicity study has been conducted for Healive on mice and rats. No toxicity was observed in mentioned studies.