Hemlibra Use In Pregnancy & Lactation 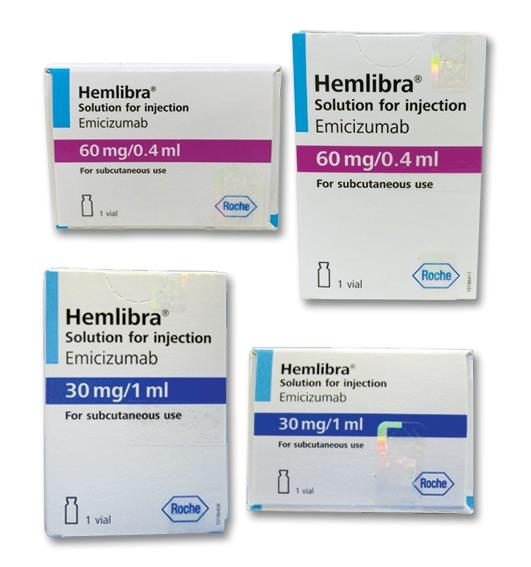 Concise Prescribing Info Full Prescribing Info Contents Description Action Indications/Uses Dosage/Direction for Use Overdosage Contraindications Special Precautions Use In Pregnancy & Lactation Adverse Reactions Drug Interactions Caution For Usage Storage MIMS Class ATC Classification Thai FDA Category Presentation/Packing
Full Prescribing Info
Use In Pregnancy & Lactation
Females and Males of Reproductive Potential: Fertility: No text (see Pharmacology: Toxicology: Preclinical Safety: Impairment of Fertility under Actions).
Pregnancy Testing: No text.
Contraception: Women of childbearing potential receiving HEMLIBRA should use effective contraception during, and for at least 6 months after cessation of HEMLIBRA treatment (see Pharmacology: Pharmacokinetics: Elimination under Actions).
Pregnancy: There are no clinical studies of HEMLIBRA use in pregnant women. Animal reproduction studies have not been conducted with HEMLIBRA. It is not known whether HEMLIBRA can cause fetal harm when administered to a pregnant woman or can affect reproductive capacity. HEMLIBRA should be used during pregnancy only if the potential benefit for the mother outweighs the potential risk to the fetus.
Labor and delivery: The safe use of HEMLIBRA during labor and delivery has not been established.
Lactation: It is not known whether emicizumab is excreted in human milk. No studies have been conducted to assess the impact of emicizumab on milk production or its presence in breast milk. Human IgG is known to be present in human milk. The developmental and health benefits of breastfeeding should be considered, along with the mother's clinical need for HEMLIBRA and any potential adverse effects on the breastfed infant from HEMLIBRA or from the underlying maternal condition.