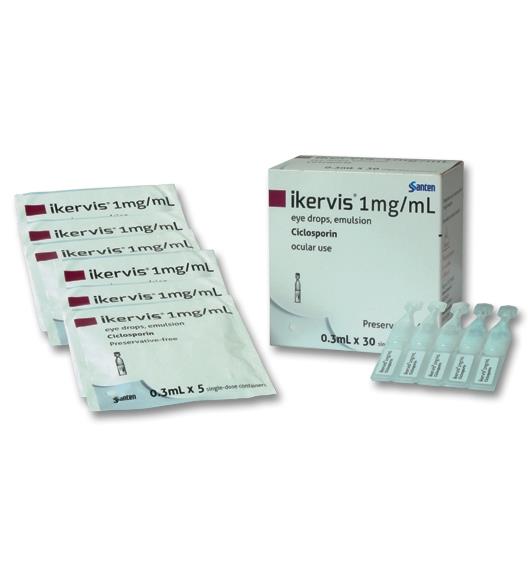 Description of selected adverse reactions: Instillation site pain was a frequently reported local adverse reaction associated with the use of IKERVIS during clinical trials. It is likely to be attributable to ciclosporin.
One case of severe epithelial erosion of the cornea identified as corneal decompensation by the investigator resolved without sequeleae was reported.
Patients receiving immunosuppressive therapies, including ciclosporin, are at increased risk of infections.
Both generalised and localised infections can occur. Pre-existing infections may also be aggravated.
Cases of infections have been reported uncommonly in association with the use of IKERVIS.
View ADR Monitoring Form
Drug Interactions
No interaction studies have been performed with IKERVIS.
Combination with other medicinal products that affect the immune system: Co-administration of IKERVIS with eye drops containing corticosteroids could potentiate the effects of ciclosporin on the immune system.
Storage
Do not store above 30°C. Protect from light.
Do not freeze.
After opening of the aluminium pouches, the single-dose containers should be kept in the pouches in order to protect from light and avoid evaporation. Any opened individual single-dose container with any remaining emulsion should be discarded immediately after use.
MIMS Class
Ophthalmic Decongestants, Anesthetics, Anti-Inflammatories
ATC Classification
S01XA18 - ciclosporin ; Belongs to the class of other ophthalmologicals .